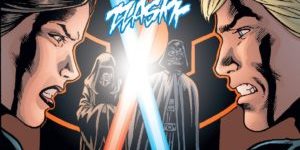 Welcome back to Strange Times & Places, were today we’re looking at an alternate universe from long ago in a galaxy far, far away – Star Wars Infinities – A New Hope!

This is a simple For Want of a Nail story – Luke Skywalker’s torpedoes detonate too early and fail to destroy the Death Star, leaving the galaxy a very different place. 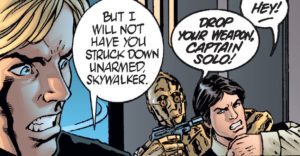 This panel never gets less funny.

With the Death Star’s destruction of Yavin IV delayed by only minutes, the Rebel Alliance is destroyed and Princess Leia Organa captured during the Battle of Yavin. Luke Skywalker begins his training under Master Yoda years earlier, taking his training to full completion during years in isolation rather than leaving after only months (days? Episode V isn’t super clear on that point…). Meanwhile, Leia is brought to the Dark Side by the promise that the Imperial throne would be her future – a chance to make right the Emperor’s wrongs as his heir. These conflicting paths will meet again on Coruscant, during the five year anniversary of the Empire’s victory at Yavin… 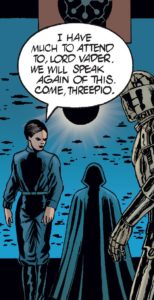 The post-Rebellion paths for the heroes feel very natural: Luke going immediately into training is a no-brainer, Leia initially tries to kill herself rather than be Vader’s apprentice but is ultimately seduced by the idea that she could win from the inside by playing along, and Han Solo & Chewbacca…do their best to avoid Jabba and lay low until it’s time to bring Luke back into the world. Even Yoda accompanying Han & Luke to Coruscant feels natural, especially since we the audience now know about his history with Emperor Palpatine AKA Darth Sidious. Since this comic predates Episode III, the creative team definitely lucked out when canon went their way.

The climax is built on Yoda crashing the Death Star into the Imperial Palace. It seems more than a little out of character for the granddaddy of all Jedi Masters to crash a moon-sized space station into the most populace planet in the entire galaxy. Sure he’s decapitating the Empire by taking out its ruling class, but he’s also killing millions of people in its middle, lower, and impoverished classes too. 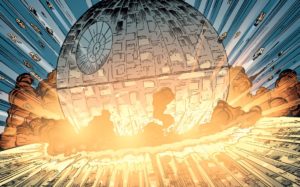 NEXT WEEK: 1 out of 5 – Would Recommend comes out of retirement to review Death Race 2050!