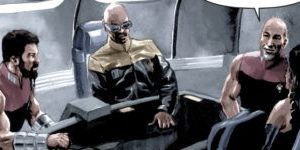 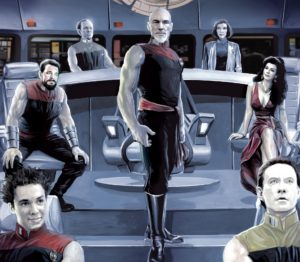 Welcome back to Strange Times & Places, where today we’re taking a visit to the 24th century AND an alternate reality in Star Trek: The Next Generation: Mirror Broken.

I’d say that it’s a Royale With Cheese. The Mirror Universe canonically diverged from the mainstream Trek Universe approximately three hundred years before this story with a “For Want of a Nail” event, so I’d say we’re so deep into those dominoes falling that things qualify as having a bunch of a bunch of little differences adding up. 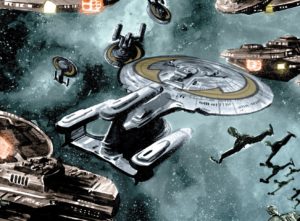 The Terran Empire is on the ropes, badly losing a war with a Cardassian/Klingon Alliance. Captain Jean-Luc Picard is commanding the ISS Stargazer, an old starship that’s basically falling apart, but he knows he could lead the empire’s return to greatness if given the chance. Rumors of a Galaxy-class super ship, the new ISS Enterprise, may be just that chance…if he has the cunning and strength to seize it.

Come Back Next Week for the Triumphant Return of Tokusatsu Gesundheit!