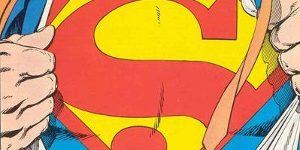 I’m not sure what the weather is like where you are reading this, but here in Michigan it is bitter cold!  But I’m not going to let that stop me from writing up a new RETRO REVIEW.  This week, I thought I’d pick out a comic from DC Comics, so I rummaged around in the DC annex of the comic book vault, mark 2, and emerged with The Man of Steel # 1.  This is the first of a six issue mini-series that came out in 1986 where DC gave the go ahead to writer/artist John Byrne to revamp the Superman mythos!  In fact they felt it was so important that the six issues of this mini-series was published every two weeks, rather than monthly.

The first issue is dated October 1986, though this issue, as well as, the second issue hit the newsstands in July of that year.  Issues three and four were published in August and issues five and six were published in September.  So basically this series was DC’s summer event for 1986!

The first issue was issued with two separate covers.  The newsstand edition sported this cover: 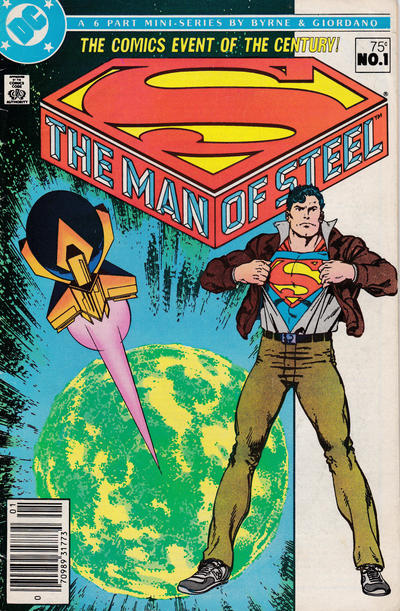 The direct market, i.e. the comic book shops sported this close up cover: 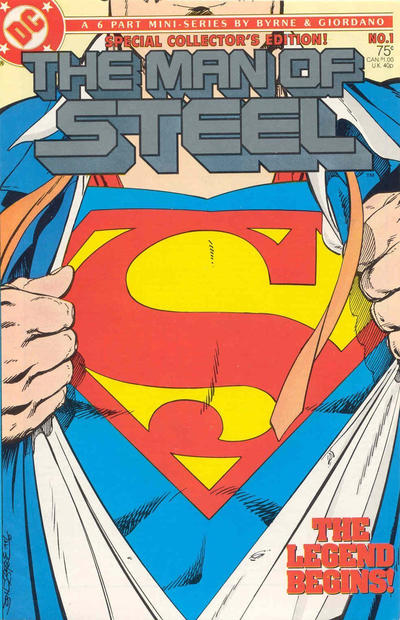 This first issue really doesn’t have an overall title, as Byrne provides a prologue, two chapters and then an epilogue, all with their own titles, but the cover does proclaim … “The Legend Begins!”, so I’ll go with that as the title to this issue.

As I said, the Superman books were losing ground in the sales arena and DC Comics, in general, were still losing in the comic book sales arena to Marvel Comics, so something had to be done.  So DC Comics raided Marvel and brought one of their biggest names over to DC.  And that man was John Byrne.  This was something similar to when they brought over Jack Kirby from Marvel during the early 1970s.

Byrne had gotten his start in the fanzines of the 1970s, then found work at Charlton Comics, then moved over to Marvel Comics, where he became famous doing their main X-Men book.  He also had other important runs on books like the Avengers and the Fantastic Four, as well.  Even a very nice, but short, six issue run, on Captain America!

At DC, he was given their lead character, Superman, and told to bring him both, up to date and back to greatness!  And he started with this mini-series, The Man of Steel.

The series was both written and pencilled by Byrne, with the inks provided by Dick Giordano.  Byrne starts things off in an eight page prologue, back on the Planet Krypton and the reader once again gets a recap of Superman’s parents; Jor-El and Lara, the planet’s imminent destruction and Kal-El being sent into space, towards Earth, as Krypton explodes!

Chapter one begins fifteen or sixteen years later with Clark Kent scoring the winning touchdown in his high school’s big game.  Then Byrne provides a flashback to his arrival on Earth and Johnathan and Martha Kent finding him in the rocket which as landed outside of Smallville, Kansas.  The reader is also treated to some homespun wisdom provided by Johnathan and Martha, as they instruct their adopted son, Clark.

Chapter two recounts Superman’s first outing in the “real world” a number of years later, as he saves a plane that is about to crash.  Here he first meets Lois Lane.  I might add that Byrne had Clark Kent save the plane and not in costume.  But he manages to get away without revealing his identity.  It was after this first outing that Ma Kent sewed up the most famous costume on the planet, Superman’s.  This actually happens in the epilogue and the final page of this first issue shows Superman taking flight for the first time, in his soon to be famous, Superman “union suit”!

A pretty good first attempt by Byrne and company’s part.  It retells the legend, with a slightly different twist on things and also introduces the reader to a few of the major characters in the Superman mythos without making to many drastic changes to upset long time readers.

Personally, I was never a big fan of Superman, I have always prefered Batman better, myself.  But the promise of a revamp and John Byrne’s handling the story and art was enough to get me to buy into the series and stick around for the next five or six years, as well.

So mission accomplished, Mr. Byrne and DC Comics!  If you haven’t discovered this series, I highly recommend it.  Check it out, you won’t be disappointed!

That’s all she wrote for this edition of RETRO REVIEW.  Stay warm and safe, if you’re like me, experiencing sub zero temperatures and come back next week for a new Fabulous Find.