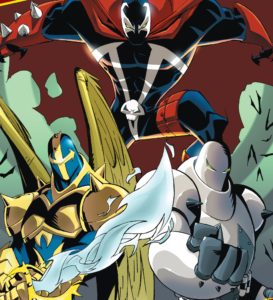 Spawn X, Spawn Omega, and The Redeemer – The Forces of Light!

Welcome back to Strange Times & Places, where classic do-gooders are usually receive darker and edgier reimaginings. Today, however, just the opposite will be happening in The Adventures of Spawn!

This one is a Royale with Cheese, in which many of the mainstream characters exist but are simply different, writ large.

Lord Mammon, Tiffany, Overtkill, and Cy-Gor – The Forces of Darkness!

Heroic soldier Al Simmons discovered the Necro Stone, an ancient artifact containing a mystical alien supersuit*, while under fire on a mission. Harnessing the power of the stone, he becomes Spawn X – intergalactic defender of good! Together with his allies The Redeemer (winged member of the Council of Light) and Spawn Omega (a time traveling super android), he battles the evil Lord Mammon and the Forces of Darkness (Cy-Gor, Overtkill, Plague Demons, and Tiffany) for the fate of all that’s good in the world!

Spawn Vs. a Monkey

The comic does an excellent job establishing its world, with the main story giving just enough detail and exposition to establish how this Spawn universe is different from the mainstream one without overpowering the narrative. It strips out the parentally-objectionable religious elements of Spawn’s story and recasts him as a hero worthy of a Saturday morning cartoon while managing to hit the high notes (Al Simmons, ex-soldier, uses a magic super suit created to do evil to instead fight evil). It’s somewhat reminiscent of Mortal Kombat: Defenders of the Realm that way and it feels like it could have been a real animated adaptation of Spawn. 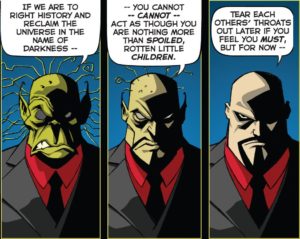 The main complaint is that some of the mini-comic stories, related as they are to toys from the second wave of Adventures of Spawn toys (while the main story is based on the first) feel disconnected from the universe that’s just been established. However, the Raven Spawn stories more than make up for them.