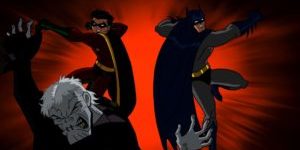 Welcome back to Strange Times & Places, where we’re looking to Batman’s future in “The Knights of Tomorrow” from Batman: The Brave & The Bold season two.

It’s an Imaginary Story, ultimately based on the one from Batman #131 – right down to being Alfred’s real person fanfic about the Batman Family.

Bruce Wayne has retired and settled down with Selina “Catwoman” Kyle, passing the cape and cowl on to Dick Grayson. While taking their teenage son, Damian Wayne, to visit the Batman Museum, they are attacked and murdered by a successor to the Clown Prince of Crime called Joker Jr. This spurs Damian into becoming the new Robin, fighting alongside Dick until he takes over as Batman with his own son serving as Robin.

In this TV show’s universe, in keeping with its mixture of modern and Silver Age elements, Alfred raised Bruce Wayne after the death of his parents. That makes him writing real person fanfiction about Batman just that much weirder than it was in Batman #131. Especially since this fan fiction includes Bruce Wayne being murdered. That’s…not normal.