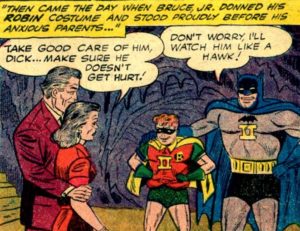 This is a classic Imaginary Story, with a twist – it is being written in-universe by Bruce Wayne’s butler Alfred. Luckily, this tale predates the “Alfred as Father Figure” take on the character…but that makes his Real Person Fan Fiction (or, as Bob’s Burgers termed it, Friend Fiction) only mildly less strange. 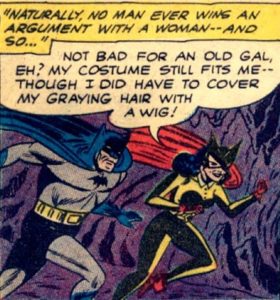 In the future, Batman has married Batwoman (who, for those who came in late, was not a lesbian in the 1950s) and retired, passing the mantle of Batman onto Dick Grayson. Their son, Bruce Jr., convinces his family to give him the training he needs to take up the mantle of Robin. When their first big case goes south, it will take the combined might of this multi-generational family of crimefighters to handle things!

And the award for most unnecessarily complex secret messaging goes to…Batman II!