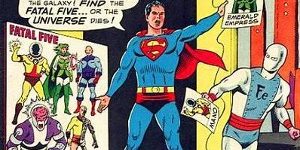 It’s time to look at a DC Comic for this week’s RETRO REVIEW.  And as many of you know, I’m a big Legion of Super-Heroes fan, though I know a lot of folks really do not care for the Legion.  So I’ll try to make this interesting for those that like the Legion and rather painless for those that do not.  I have pulled out maybe the best story from the sixties for this week’s review.  It is told over two issues, so I am looking at Adventure Comics # 352 and Adventure Comics # 353.

So let’s get started, issue # 352 is entitled; “The Fatal Five” and it is written by a young Jim Shooter, who also provided the layouts to the story.  The pencil art was then done by Curt Swan and the inks provided by George Klein.

Oh, wait a second, I need to show you the cover to this issue.  The pencils and inks are done by the same team that did the interior work; Swan and Klein: 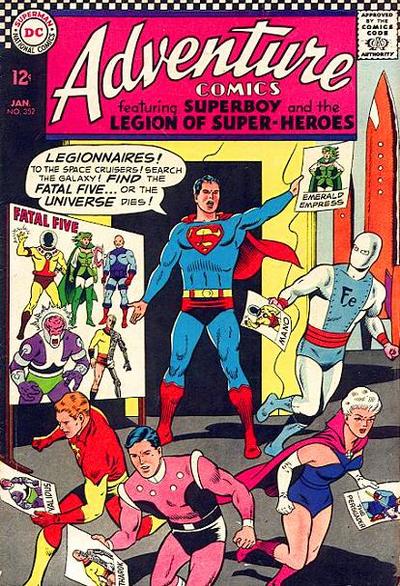 I like the cover quite a bit, as a matter of fact.  But back to the story.  After the symbolic splash page the action begins in deep space where a United Planets warning station picks up some sort of danger alert that predicts the galaxy being wiped out!

We jump from there to Legion headquarters, where the Legionnaires are reviewing files of the galaxy’s worse villains.  Starting with the Persuader, who wields an atomic axe.  Next up is Tharok, half human and half robot.  Tharok’s other half was destroyed by an N-Bomb thanks to a bad shot from a space policeman.  Tharok has made a vow to get revenge against all lawmen everywhere.  Next the Legion reviews the file on the Emerald Empress and her Emerald Eye of Ekron.  She is from the Planet Vengar and is the most wanted criminal in the Universe!  The Legion’s review continues with Validus, a strange being whose strength is incalculable and the pure energy of his brain causes mental lightning which he uses for destruction.  And finally, the villain Mano’s file is reviewed.  Mano comes from Angtu and a touch of his glowing hand can completely annihilate any object it touches.

It is at this moment that the President of the United Planets contacts the Legion and tells them of the approaching Sun-Eater that is heading towards their galaxy.  The Legion sends out an S.O.S. for help from other heroes, but none can reach Earth in tie to assist in the battle with the Sun-Eater.

So, thinking outside the box, the Legion members decide to contact the five villains who’s files they have just reviewed.  So Superboy, Ferro Lad, Princess Projectra, Cosmic Boy and Sun Boy leave to try to enlist the villains assistance.  The rest of this issue has the Legion members tracking down the individual members of what will be known collectively as the Fatal Five!

Here is the cover to Adventure Comics # 353, which contains the second and final part of this storyline: 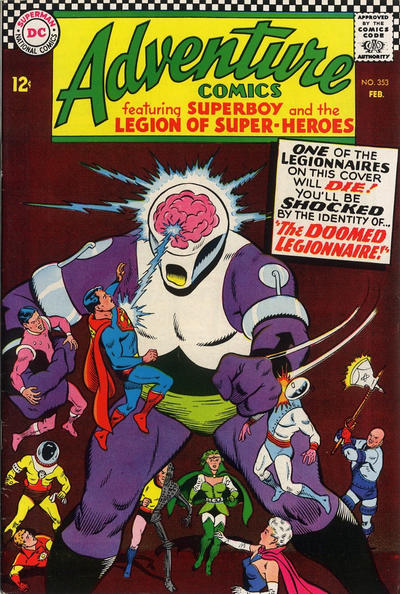 Another sweet cover drawn by Curt Swan and George Klein!  Again the story is written and layout by Jim Shooter, with the pencils by Swan and the inks by Klein.  This issuer’s story is entitled; “The Doomed Legionnaire!”

Because of his robotic brain, Tharok takes command.  The members of the Fatal Five show off their powers  That evening the heroes and villains spend the night in Legion Headquarters and all sort of behind the back plans are put into place.  Mano tried to convince the Emerald Empress to team up with him and flee.  But the Empress has eyes only for Superboy and isn’t afraid to use kryptonite to get him to side with her.  Somehow, everyone makes it through the night.

In the morning, Tharok’s plan involves luring the Sun-Eater away from Sol’s sun and towards Sun Boy.  With the Persuader dividing up the Sun-Eater with his atomic axe, so that each of the heroes and each of the villains will only have to battle a small portion of the Sun-Eater.

The second part of the plan involves increasing the individual powers of each hero and villain.  While doing this, Tharok has also managed to put Validus under his direct control.

The plan is implemented and the Persuader does his portion, but still the Sun-Eater is to powerful for each of the individual Legionnaires and Fatal Five members.  At one point Validus comes to the aid of Princess Projectra and she helps him return to their ship.

As Tharok watched each hero and villain fail, he builds an absorbatron bomb as a failsafe.  He says the bomb must be delivered to the Sun-Eater’s core.  Superboy seems to be the logical person to deliver the bomb, but he is sure to perish in the bomb’d detonation.  Before Superboy and fly off, he is struck down momentarily by Ferro Lad, who grabs the bomb and launches himself into the Sun-Eater.  He manages to reach the Sun-Eater’s core and detonates the bomb, destroying the Sun-Eater, but he also is destroyed!

The Fatal Five are told they will receive their pardons for their assistance, but they laugh and say they will never reform.  Tharok commands Validus to destroy the Legion members, but Princess Projectra manages to stop him, as he remembers her assistance.  The Fatal Five then disappear from the space ship and shortly afterwards the Legion send a memorial to Ferro Lad to the cemetery satellite, Shanghalia.  Ferro Lad’s sacrifice will long be remembered, but the Legion hasn’t seen the last of the villains now known as the Fatal Five!

Quite a dramatic story, written by a young writer, who was only fourteen or fifteen at the time.  It still holds up today with the death of a Legionnaire and the formation of perhaps the Legion’s greatest foes.

Thanks for stopping by for this week’s RETRO REVIEW and please come back next week for a new Fabulous Find. Until then … be seeing you.

The Story of the Golden Age Blue Beetle
October 1, 2021