For this week’s Fabulous Find, I thought I’d do something just a little different.  Rather than an old collectible from my collection, I thought I’d share a recent purchase that I have added.  It is; Lennon The New York Years, a graphic novel published by IDW Publishing, the first printing dated May 2017.

The book is adapted by Eric Corbeyran, from the novel written by David Foenkinos, and it is illustrated by French artist, Horne.  One other thing to take note of, it was not written originally in English, so it is translated by Ivanka Hahnenberger.  It sales for $19.99 wherever fine books are sold, including cool comic book stores, as well. 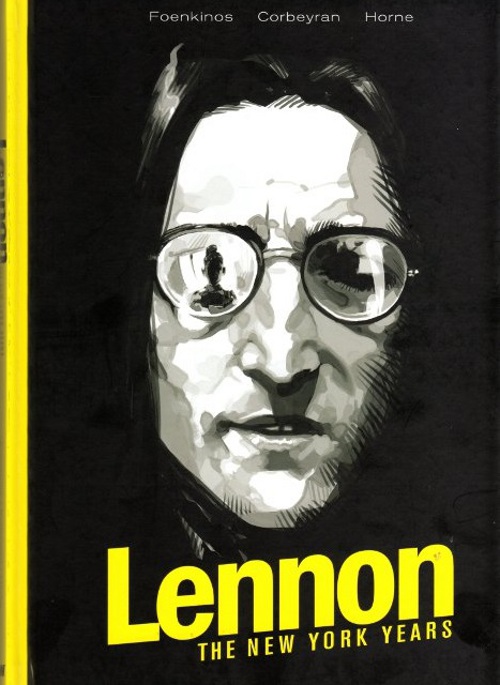 From the back cover … “In 1975, John Lennon moved to New York City, stopped being a Beatle, and started being a father.  Now experience life from Lennon’s perspective … from the imagined couch of a fictional therapist in NYC’s posh Dakota building.  Lennon recounts the many joys, shortcomings, failures, and triumphs that marked this pop culture juggernaut’s rise to superstardom.”

The story pulls you in right away, but we all must remember that this is a work of fiction.  This is Corbeyran’s adaptation of Foenkinos’ work of fiction.  But with that said, it sure does ring true and could have happened, just likely didn’t.

The story opens with John meeting the fictional therapist in the elevator of the Dakota building and deciding to see her.  The book is then divided into chapters, with each chapter representing an individual therapy session.  There are a total of eighteen chapters/sessions, plus a heart wrenching epilogue.

The chapters.sessions has Lennon taking us through his childhood, into the formation of the Beatles, through the breakup and finally dealing which his becoming a house-husband and caring for his son Sean.  Along the way the reader gets to share the Beatles early days and rise to fame and it’s effect on John.  Mixed in the story is John’s feelings and constant drug use, as well as, his failed relationship with his first wife Cynthia and his failure as a father to his first son Julian.

It tells Lennon’s story without trying to whitewash his faults and sins.  It truly seems to reflect a possible series of therapy sessions and keeps the readers interest from the opening page till the sad end of Lennon’s New York story.  It even covers the year long lost weekend that Lennon experienced away from Yoko and their reuniting once again.

Whether you are a fan of John Lennon or The Beatles, this graphic adaptation is well done, both in writing and in the art.  It is well worth your time and money to give it a try.  I definitely recommend it.  As I said, the writing is excellent and gives the reader a possible insight into John’s head and emotional state throughout his lifetime.

The art by Horne is also excellent.  He captures John’s likeness very well, and even does an excellent job with the other three Beatles, as well.  It doesn’t take away from the story at all and helps to keep things moving forward until the very end (in more ways than one).

The only real gripe I have with the whole thing is just a small issue on page 126.  In the second to the last panel on this page, Lennon is talking about Paul McCartney and The Beatles breakup the caption reads; “And of course it was just before the release of his first album … That gave him incredible exposure.”  But Horne has drawn the cover to Wings Wild Life, rather than McCartney.  Oops!  And for some reason this really, really bothers me.  I know this shouldn’t bother me but it does.

The book is so good and the research spot on, and then this.  I know, I need to just let it go and I will, but I’m being honest here, and this is the only thing I find wrong about the whole book!  So I rant …

Anyway, I’m finished.  Hope you enjoyed my Fabulous Find covering a new collectible and please be sure to return next week for a new RETRO REVIEW.  be seeing you …..