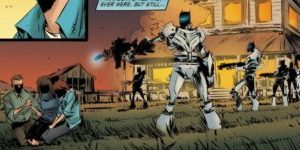 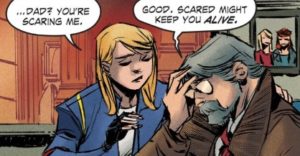 Welcome back to Strange Times & Places, where we promise you’re not reading a repeat! Two things happened this week that lead to doing another ST&P: First, Kamen Rider Build ended on a game changing cliffhanger last week and I felt it better to see how it resolves before writing about the show. Second, it turns out that Gotham City Garage #1 hits stands Wednesday, so I thought we ought to take a look at it. 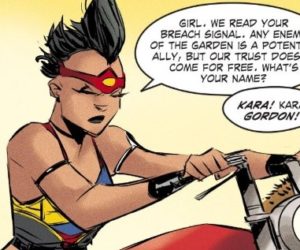 It’s a Royale with Cheese, taking place in a world that exists to justify the designs of the statue line it is based on. Said world ends up being a mix of Mad Max, Logan’s Run, and Judge Dredd and is much better fleshed out than you’d expect a comic based on sexy statues to be.

The world as we know it has ended but humanity hangs on in single, utopian city called The Garden. Utopia, however, comes at a price: every citizen is equipped with a “ridealong” implant that keeps them permanently pleasant, pliant, and placid. Ridealong technician Kara Gordon, daughter of a high ranking police official, is about to find out that this dystopia isn’t all it’s cracked up to be – and she’ll have to throw in with the rebellious bikers of Gotham City Garage if she wants to survive. 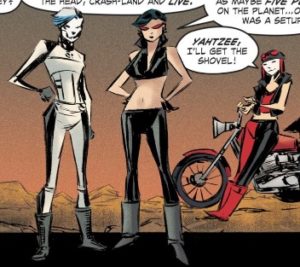 Come Back Next Week for a New Tokusatsu Gesundheit (I Promise)!