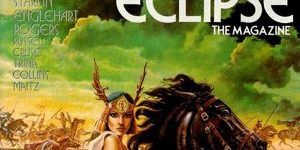 Hey, Hey, Hey …it’s a new RETRO REVIEW!  I’m glad you could all find your way to this week’s column.  And what do I have in store for you this week?  Well, how about Eclipse, The Magazine # 1, cover dated May 1981 and published by Eclipse Enterprises.

This is the first of a short-lived black and white magazine from Eclipse that was edited by Dean Mullaney.  For a first issue, it wasn’t half bad.  Right of the bat, it’s got a colorful cover, painted by Paul Gulacy.  Take a look: 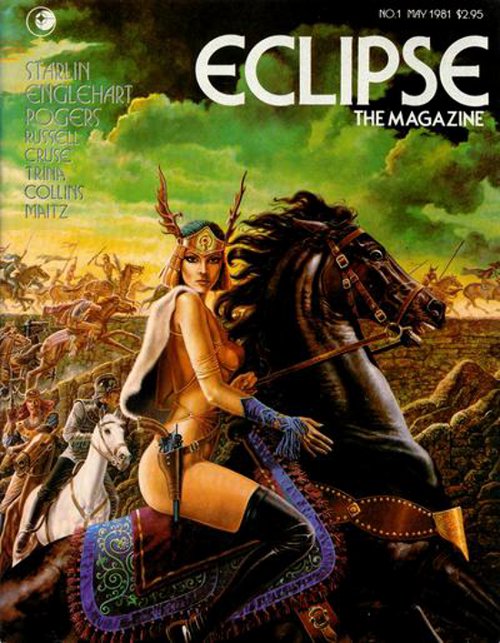 A striking image, needless to say.  It grabs the potential buyer’s attention and makes them want to pick up the magazine and take a look.

Once you open it up the reader gets a short Editorial by editor Mullaney that is illustrated by artist, Don Maitz.  Next up, is a two page illustrated Table of Contents.  One page lists the stories and their creators and the second page shows art for five of the seven strips.  Then we get a one page subscription blank for this new magazine, as well as, other Eclipse publications.

Now on to the reason why anyone would purchase this magazine.  First up is a nineteen page story entitled; “Slab”, it is written by Steve Englehart and both pencilled and inked by Marshall Rogers which introduces the reader to the protagonists of the story, S-329, Agent of Storbor and Klonsbon the Foozle!  It is a pretty strange tale and the story is a little confusing, but the art is nice to look at.  Not sure I can explain it any better without taking up way to much space.

The second story is just six pages and is written, pencilled and inked by Jim Starlin.  It is entitled; “Amber III”.  For those keeping track; Amber I was published in Epic Illustrated # 34, published by Marvel Comics and Amber II was published in Heavy Metal Magazine, vol 3, # 4, August 1979.  This story adapts and illustrates a children’s poem.  You might remember it going something like this; This old man, he played one.  He played knick-knack on my thumb.  With a knick-knack patty-whack, give a dog a bone, this old man came rolling home.  Starlin’s adaptation features a man facing death.

The third story is also deals with death, and is entitled simply; “Death”.  It is only three pages long and it is written, pencilled and inked by Howard Cruse.  This story is told and illustrated in a more cartoony and fun style, even though it too covers a pretty heavy topic!

The fourth story is ten pages long and is entitled; “The Chimera”.  It is written and pencilled by P. Craig Russell.  It is published in pencil form, with no inks.  Truthfully, it’s reproduction could definitely used inking.  Russell’s art is gorgeous, but it is difficult to tell exactly what is going on.  And to make matters worse, there are no word balloons or captions.  It features a nameless barbarian on a quest, I’d have to guess.

The fifth story is “Cartoon Man” written, pencilled and inked by Marc Hempel.  It runs five pages and features a self aware cartoon character that appears in the strip.

The sixth story is just one page.  It is entitled; “Loose Hips Sink Ships” and it is written by Chris Browne with the pencils and inks provided by Trina Robbins.  The story revolves around a radio drama show.

And the seventh and final strip is “I, For An Eye” with the first chapter entitled; “The Girl In The Red Wedding Dress”.  It is written by author, Max Allan Collins and the pencils and inks are done by Terry Beaty.  The story introduces the reader to the character, Ms. Tree, prior to her getting her own comic book.

That’s it for this week’s RETRO REVIEW, but please return next Friday for a brand new, Fabulous Find.  Until then … be seeing you.