I WILL TELL YOU #31: Superman Doesn’t Have to Suck 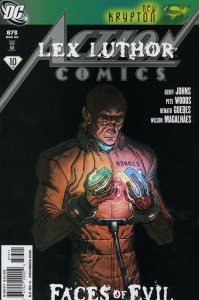 Probably the last GOOD Superman story, until last week. And gee, look who's on the cover . . .

Superman sucks. Yeah, that’s right; he sucks. Not the character itself, who is a favorite among many a comic fan, myself included; no, I’m referring to the most all of the storylines that the DC offices have spewed out over the past few years, most of which have induced a reaction among readers not unlike the kind Kal-El himself would have if he tried to down a Kryponite-flavored Slurpee. The last decent storytelling to come out of either of the main titles was the New Krypton arc split between Geoff Johns and James Robinson, and that was over two years ago. With a notable exception; more on that later.

I tried to tell you all just how bad Action Comics was in this review, even though DC-loyalist Dave Marchand tried to muster up a defense. I think I made my feelings pretty clear here, though. And in an apparent violation of Back to the Past’s little-known Three-Strikes policy for its contributors, I was stopped from saying anything more here. Although, I did manage to get in a couple of punches in on the Superman title, as well, here and here. And, take note: those of us who thought that Action Comics would right itself after Lex Luthor was finally chased from the title have been absolutely flabbergasted that it has actually gotten worse.

So, do you believe me now, DC? I like to think that you finally caught on to my rants, were deeply moved and motivated by my irrefutable points, and that you finally decided that not only does Superman need another reboot, but so does the entire DCU. Yeah, I really do like to think that, even though that notion is about as likely as Superman telling the U.S. Government to kiss his big red “S”.

Everyone’s tired of hearing me and seeing me and reading me dissing on the big S. Actually, they’re just tired of me, but that’s not your concern, DC. The truth is, for all of the commentators who believe that if you don’t have anything bad to say, you should say nothing at all, Superman has been a good topic for many a column and commentary, because you have made it so. I would like to thank you for attempting to leap this tall reboot in a single bound, because if you succeed, you’ll have fixed things and made the industry a better place. But if you fail, well; then there will be lots to write about for a very, very long time.

And by the way, DC, you know why the whole citizenship thing stuck in the proverbial craw of so many, particularly comic folk? It’s because Superman is an American creation, by American creators, for an American publisher that’s made its name by popularizing the comic book medium; a medium that was an American invention. Superman turning his back on America felt like Elvis moving to Japan, or the New York Yankees moving to Canada.

Now. Knowing that all that comes to pass which doth suck has been and shall continue to be ripped upon mightily, know also that there is a related effort which soars far above the cesspool of Superman stuff and deserves nothing but the utmost of praise. 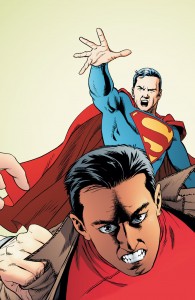 The original cover for Superman #712, before the story was pulled. Any chance it will see print before the relaunch? Hopefully, no.

What is that effort, you want to know? I will tell you, and I will do so gladly: it’s Superman #712, by Kurt Busiek and Rick Leonardi. But wait, you say; didn’t I make a pretty clear case against the current arc in Superman, as evidenced by those videos above that I just know you all clicked the links to?

I like to think I did, but for those who don’t know, DC pulled a last-minute switch and substituted another fill-in story in lieu of the next scheduled chapter of the Grounded arc. And believe me, this is a very rare instance where a fill-in story is welcomed instead of the expected one. In truth, I would have welcomed a 32-page instruction manual on do-it-yourself dentistry over the next chapter of Grounded, but what we got instead was absolutely wonderful.

Sitting on the shelf for the past few years has been this moving dog-and-his-boy story, or dog-and-his-Superboy story, as it’s a story featuring Krypto in the days immediately following the death of Conner Kent. Yes, it’s a story about Superman’s dog, a concept that, yeah, modern audiences might have a tough time swallowing. Perhaps that’s why DC finally dusted this story off and ran it now, while it had the chance; you know, while Superman still sucks.

But this particular story does not suck. In fact, it’s the best story to appear in a Superman title in years. Yeah. It’s that good. A lonely Krypto devotedly waits on the front porch of the Kent farm in Smallville for his master to return, not understanding why Conner isn’t coming home. Krypto’s eventual search for his companion is emotional and heartwarming, and Busiek, who’s one of the few writers who seems to get that Krypto is a dog and not a Kryptonian in a dog’s body, He eschews the ludicrous idea of thought balloons and tells a largely wordless story that anyone who’s ever owned a pet will absolutely understand. It’s a terrible shame that this story sat unused for so long while so many inferior ones have been churned out over that time. 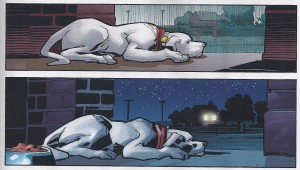 Superman's dog made for a better story than Superman. Time for a reboot.

While no one is sure just what elements from the classic Superman mythos will survive the revamp, it’s entirely possible that Krypto will not be among them, and if that’s so, this could very well be the Last Krypto Story. And if that’s so, there’s no better fitting farewell. If you missed this issue, or if you love animals, or if you have any kind of heart at all, you need to find this comic.

So, clearly, Superman doesn’t have to suck, even when he’s not in the book, which seems to be a good chunk of the time nowadays. Perhaps that’s something the reboot can fix.

The not-sucking part, that is.