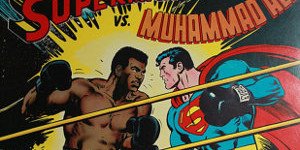 Time for a new RETRO REVIEW, and this week I’ve gone to the Treasury sized comics section of the vault and pulled out DC Comics’ All New Collectors Edition, Volume 7, Number C-56, or as it’s better known as, Superman Vs. Muhammad Ali.  This was published in 1978 and that’s when I bought my copy, right off the newsstand, minty fresh.

The extra large and extra long comic is credited as follows:  Script based on an original story by Denny O’Neil, adapted by Neal Adams, pencilled by Neal Adams and inked by Dick Giordano and Terry Austin.  Including the covers, the book is 76 pages, with the story running a full 73 pages.  Only the front & back covers, and the inside of the front cover are not story pages.

Take a look at the beautiful wrap-around cover done by Neal: 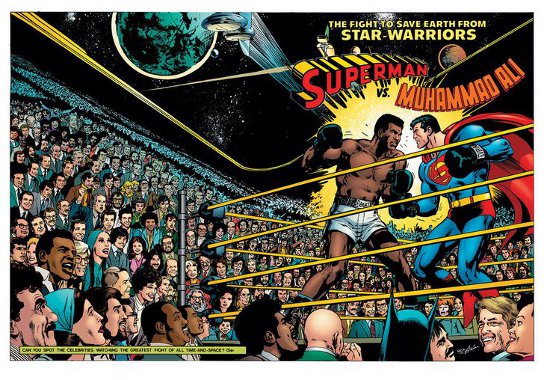 I’m sure the small reproduction really doesn’t allow you to marvel at the true brilliance of the cover that Neal has produced.  Besides Superman and Muhammad Ali, Neal has drawn 172 people into the crowd watching the fight. They include, show-biz personalities, Celebrities from Politics, Sports and Literature and the Arts, Warner Communications executives, Neal Adams’ Continuity associates, Muhammad Ali cornermen, various Editors, writers and artists, plus some DC characters.

The book measures 10 x 13 1/4 so the picture above really measures 20 x 13 1/4, so it’s much easier to identify the people Neal drew.  In fact, the inside front cover lists the people and provides a key so you can find them.

But what about the story?  Glad you asked.  In a nutshell, the plot is as follows; Muhammad Ali has come to Metropolis and Clark, Lois and Jimmy are looking for him for an exclusive interview.  They find him on a playground playing basketball with a bunch of young people.  But before they can get started, an alien appears and basically challenges Earth’s greatest fighter to a boxing match to decide the fate of the Earth.

But first it must be decided who is the greatest fighter, Superman or Muhammad Ali.  Superman isn’t really a boxer, so Muhammad Ali agrees to train Superman.  The aliens give them 24 hours to decide who will face their champion. Superman takes Ali to a dimension where 24 hours hours equals 2 months, so he has a chance to learn to box.  But using an artificial red sun they determine that Ali is the better boxer, by far.  The aliens uncover their attempt to gain more time and stop their training.  They also take them back to their home planet, which happens to be under a red sun.

It’s determined that Superman and Muhammad Ali will have a preliminary bout to see who wins the right to face the alien champion.  Here’s a page of Superman vs. Muhammad Ali, page 35: 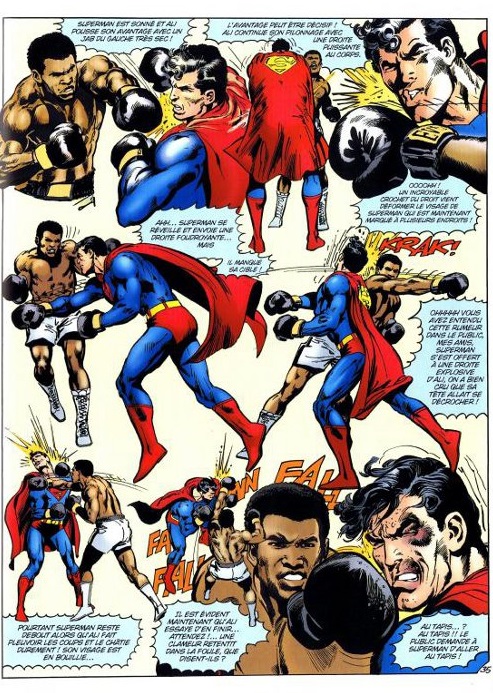 As you can see, Superman is definitely getting the worst of it!  But if you think about it, as I said before, Superman isn’t really a boxer, so without his super powers (under a red sun) he doesn’t stand a chance against Ali.  Even though he fights on, ultimately Ali wins the fight and we see the following: 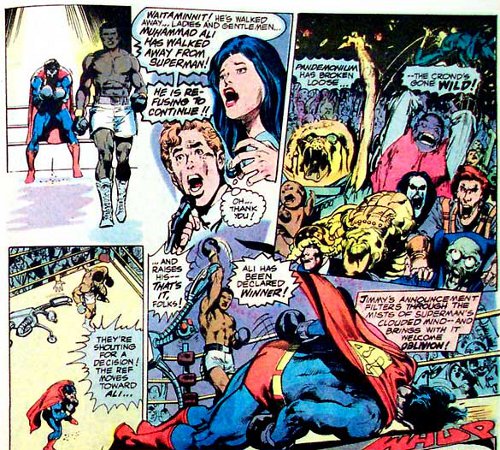 At first the alien seems to hold the upper hand against Ali, even knocking Ali to the canvas.  Meanwhile one of Ali’s cornermen, Bundini Brown, is seen running through the alien’s complex.  Hopefully, I can reveal things since the story is thirty-seven (37) years old.  But things are not as they seems.  Actually, Bundini is Superman in disguise.  It was Bundini who was sent home disguised as Superman earlier, thus freeing up Superman to defeat the the alien armada that was threatening Earth.

And Ali makes a come back to knock out Hun’ya!  The alien in charge decides to destroy Earth anyway, but finds that Superman has already stopped his warships.  And then Hun’ya discovers his “boss’s” real nature and turns on him, so the Earth is saved by both Superman and Mohammad Ali!

The book ends with this scene: 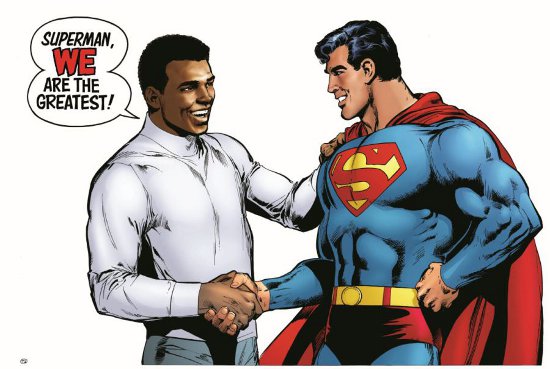 Maybe not the most realistic story, but it makes sense in a comic book way and I know it made the news and got a lot of positive press back in 1978.  And I’m sure it sold lots and lots of copies too!  It is a fun read with really great, no excellent artwork, so if you don’t have this in your collection, you should rectify that at once and pick one up.  I understand that DC reprinted it in hardback form a few years ago, both is a regular size edition and even a treasury size hardcover edition, as well.  Sweet, but I do not own either of those.

Before I leave you I’ll share a picture of the statue that DC Direct and Ali Enterprises issued about ten or twelve years ago.  I don’t own this either, but it’s pretty sweet, too: 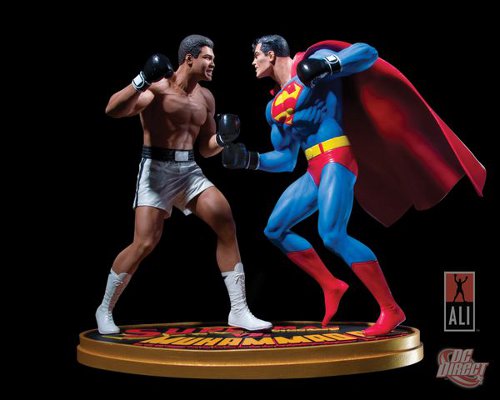 So that’s it for this week’s RETRO REVIEW, but be sure to return next week for a new Fabulous Find.  Til then, keep your dukes up …