1 out of 5 – Would Recommend: Rocketship X-M 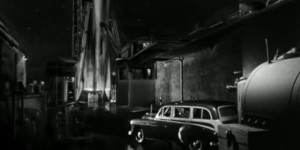 Welcome back to 1 out of 5 – Would Recommend, where we’re prepping for the Oscars by watching stuff worthy of a Razzie. This week, we’re watching 1950’s Rocketship X-M.

A brave five man crew heads out into space on the first manned rocket mission. Their destination is the moon, but getting there won’t be easy! There’s…honestly not that much more to say.

That’s a very roomy space capsule, that is.

Dalton Trumbo, two time Academy Award Winner for Best Story (precursor to Best Original Screenplay) and writer of Spartacus (which didn’t net him an Oscar but is probably his best known gig). Rocketship X-M appears to be one of the many B-movies that Trumbo ghost wrote to make ends meet (when he wasn’t winning Oscars) during his time on the Hollywood Blacklist. One assumes he was simply a hired gun, cranking out the script for what research indicates was the rushed equivalent of a mockbuster without much in the way of research or dedication, but that is simply assumption.

Worthy of note: Bryan Cranston is nominated for Best Actor in a Leading Role at this year’s Oscars for playing Dalton Trumbo.

Honestly, this movie is a bit of a snoozer. It was shot in less than three weeks with a fairly small (even for the time) budget, meaning corners were cut. There are so few settings that the movie could almost work as a stage play, the special effects shots are few and far between, and the scenes on mars are obviously just tinted pink. The movie is available in full on YouTube, but do yourself a favor and check out some of Trumbo’s better received works instead. 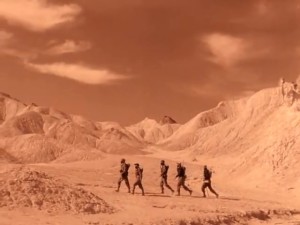 Mars or a planet with an Instagram Filter-based culture? You decide.

NEXT WEEK: We look at the early work of Spielberg’s go-to cinematographer with 1991’s Cool As Ice.