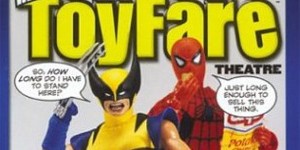 Greetings all, it’s time for a new Fabulous Find.  And this week I thought I’d bring to light something a little newer than I usually feature.  So from 2003, I bring you … Twisted ToyFare Theatre Volume 1, published by Gareb Shamus Enterprises, Inc., doing business as, Wizard Entertainment.  Yep, that’s right, Twisted ToyFare Theatre was brought to you by the same people that published Wizard Magazine.

Wizard Magazine started up in July 1991 and by 1996, five years later, they were expanding their empire.  During the winter of 1996, Wizard published a magazine entitled; ToyFare’s 1996 Winter Special and it was in this magazine that Twisted Mego Theatre began.  It later morphed into Twisted ToyFare Theatre, or TTT, probably to help identify it with ToyFare Magazine. Branding is everything, now-a-days!

It became a very popular strip in the ToyFare monthly magazine.  TTT predominantly featured the 8-inch action figures made by Mego Corporation.  The strips were done in “fumetti” style, by photographing the toys in home made built “sets” and then likely, using Photoshop, to add effects and word balloons to create strange and bizarre stories.

The strips ran continuously from it’s beginning, until the last ToyFare Magazine was published, dated January 2011.  Quite a run, and I suspect most of my readers have encountered at least one of this strips in their comic collecting days.

This issue has an introduction by Kevin Smith.  It also includes an illustrated background story entitled; Puppet Masters, featuring the guys behind the scenes, who share “everything you ever wanted to know about Twisted ToyFare Theatre but didn’t care to ask”.

I guess I should show you the cover, shouldn’t I?  Well, here you go: 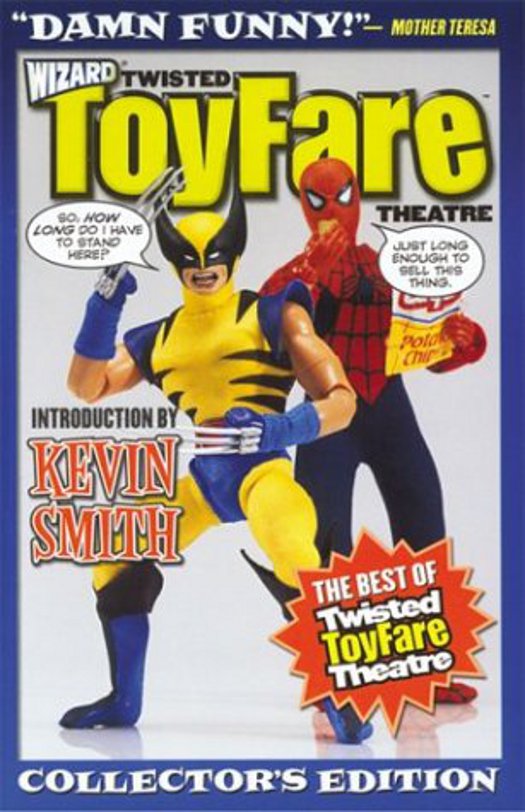 This magazine also reprints the very first Twisted Mego Theatre strip, entitled; Spider-Macarena.  I’ll try to show that strip for you, as well.  Oh, it truly was a strip, more like a newspaper strip and it ran over four pages.  Take a look:

Though future episodes would look different, but would certainly feature the same type of humor.  Take a look at page 10, which is the first of a four full page strip reprinted from the second issue of ToyFare Magazine. 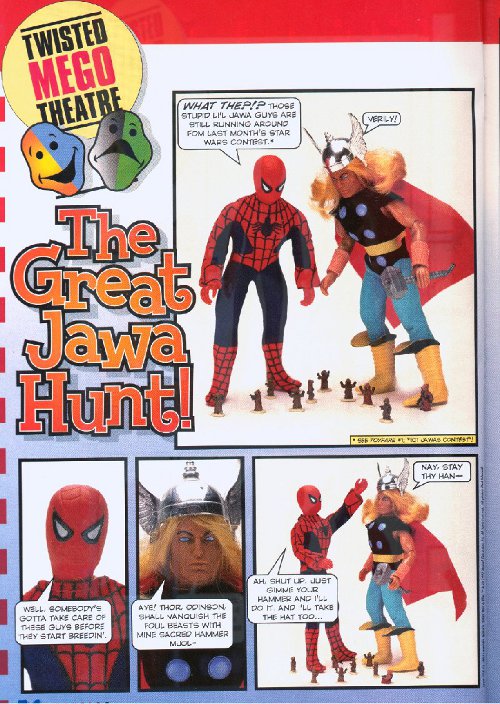 I’m not sure how well, these will reproduce, or if you’ll be able to read the word balloons, so here’s a blow up of just two panels from page 72:

The collections feature Marvel Comics characters, plus others like; CHiPs, Star Trek and The Dukes of Hazzard.  Early on Twisted Mego Theatre featured DC Comics characters too, but an early strip entitled; “Super Friends” featured Spider-Man insulting the DC heroes for their ridiculousness, and DC filed a cease and desist order, preventing TTT from ever using DC characters!

Well, we all know that DC never had a sense of humor, and this just proves it!

There is also a Robot Chicken television show connection.  That show also features animated action figures and it sprung from Twisted ToyFare Theatre.  Why do wee know this?  Well, a former TTT writer, Tom Root, became the head writer for Robot Chicken.  Another TTT alumnus, Matthew Senreich, also writes for Robot Chicken.  Plus producer, Seth Green, is an avid toy collector and a long time friend of the magazine.  He even wrote one of the introductions to the collections.  Plus actor, Mark Hamill, a frequent voice actor on Robot Chicken has also written an introduction to one of the TTT collections. 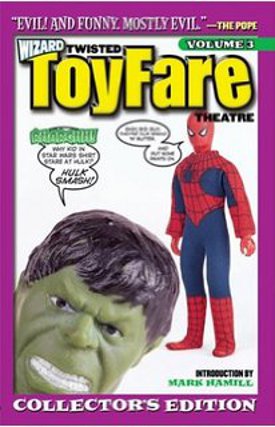 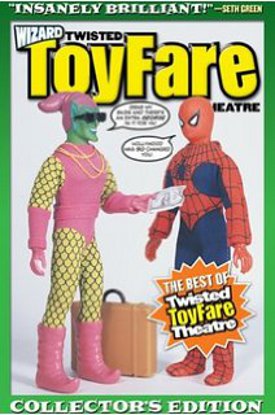