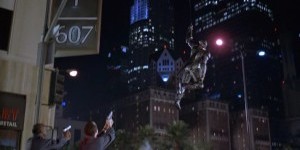 Welcome back to 1 out of 5 – Would Recommend, where I just turned 26! To celebrate, I’m treating you guys to a rundown of childhood favorite (which happens to be pretty poorly made), 1997’s Steel!

Brilliant military weapons designer/literal giant John Henry Irons (basketball legend Shaquille O’Neal) quits the army after the irresponsible demonstration of weapons he designed cripples his best friend. He tries to have a simpler life in his old neighborhood, but Lt. Burke (Ex-Autobot Judd Nelson) – the glory hungry dingus who misused Irons’ weapons – has other plans, arming the street gangs of L.A. with bleeding edge military hardware. Ol’ John Henry’s can’t let that stand, and takes to the streets as the armored Steel to put a stop to it! 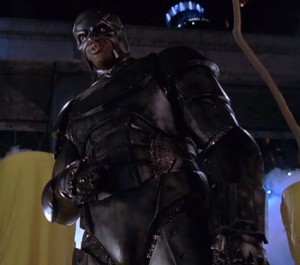 …I’m suddenly glad Iron Man didn’t get made until CGI was cheap and effective.

Warner Brothers, the same people who usually make DC Comics movies. This flick is loosely based on the Superman Family hero of the same name, who was riding pretty high at the time – headlining a successful ongoing series since 1994, making an appearance on Superman: The Animated Series only a few months after the movie, soon to join the JLA, etc. Unfortunately, the movie kinda sucked.

In fact, after the one-two punch of Batman & Robin and Steel, Warner Brothers wouldn’t make another DC superhero movie until 2004…when they released Catwoman. That’s the longest gap between DC movies since 1978, for those keeping score at home.

This movie is goofy as all get out – the costume is cheesy, Shaq’s a terrible actor, the villain’s motives are petty at best, and the bad guys get steam rolled pretty easily during the climax. That said…it’s fun, it’s funny (frequently on purpose), it doesn’t take itself too seriously, a lot of the music is good, and it moves fast enough that you don’t have a chance to get bored – despite the eponymous hero not showing up until 45 minutes in. Is it a great movie? No, it helped do enough damage to the profile of DC superhero movies that they’re only just now recovering fully (though Catwoman, Superman Returns, Green Lantern, and Jonah Hex didn’t help). But it is a fun 90’s era superhero movie (the age of lower budgets and practical effects) and surely worth a look. 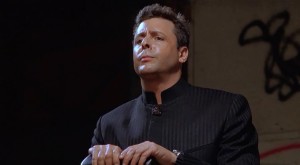 At least he’ll always have The Breakfast Club.

NEXT WEEK: We kick off a month of examining the less golden output of Oscar winners with 1950’s Rocketship X-M, written by two time Academy Award winner Dalton Trumbo.