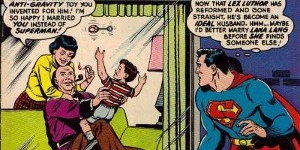 Welcome once again to a new RETRO REVIEW.  This week it’s time to dig in the DC Comics section of my comic book vault.  And I’ve brought up from the depths, Superman’s Girl Friend Lois Lane # 34.  The comic is cover dated July 1962 and features a two-part imaginary story within the comic, plus a second nine (9) page story.  You definitely got your monies worth back in the Silver Age!  The imaginary story has an overall title of; “Tee Wife of Superman’s Foe!” and the comic features a nice Kurt Schaffenberger cover, who provided both pencils and inks. 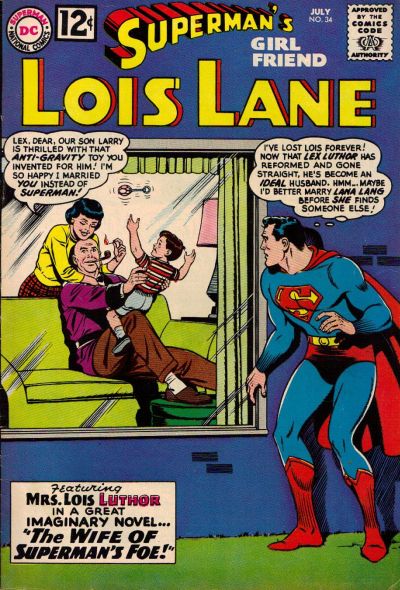 As you can see, it shows Superman playing peeping tom, as he looks in on Lex & Lois Luthor playing with their son in their living room.  The story is written by Jerry Siegel, one of Superman’s creators.  The interior artwork is also provided by Kurt Schaffenberger (both pencils and inks).  The seventeen (17) page story is broken into two chapters.  The first chapter tosses the reader immediately into the story, as Luthor kidnaps Lois  and brings her to another planet (Omark) where he plans to hide her from Superman in a lead-lined castle on a planet that is covered by castles.

Once there, as Lex and Lois exit their spaceship, they are met by four of the planet’s inhabitants.  Even though Luthor is evil, the four sense a small spark of decency within Lex and using this spark, they expunge all of the evil and replace it with good using their mental powers.  Don’t ask, it was the Silver Age!  Now that Luthor is good, he brings Lois back to earth and confesses all his crimes and leads the police to all of his hidden stolen loot.

Everyone, including Superman, wonder if this is some plot on Luthor’s part, but Lois stands by and supports Luthor.  He willingly goes to prison and while there saves the warden’s life and because of this, Lex is given a parole.  Once out he confesses his love to Lois, but she turns him down, as she still loves Superman.

Some time later, Lois’ car breaks down on a road that follows a cliff.  She jumps off the cliff expecting Superman to save her, but he doesn’t appear and she plunges into the sea and is seriously injured, but is saved from drowning by a nearby fisherman.  Lois lies dying in the hospital, but Luthor uses a newly invented ray to save her her life and restore her.  When she awakens she assumes Superman saved her, but a nurse tells her, no, it was Lex Luthor.  Because of this, Lois decides she will marry Lex and the first chapter ends with their wedding.  Superman bursts in, but to late!

Chapter two opens with Lex inventing lots of things to make life better for the world, including robots that do housework and a pill that replaces gasolene. Lex Luthor becomes a man who other women wish they were married to.  Superman, meanwhile, decides to ask Lana Lang to marry him and gives her a serum which grants her superpowers.  Soon after, Lois and Lex have a son, whom they name, Larry.

We see Lois age and gain weight, as Larry grows into his teenage years.  But Lex invents a machine that de-ages Lois and gives her eternal youth, but there is only enough of the “youth-alloy” for one person, Lois!  The reader gets to see an aged Jimmy Olson, who now runs the Daily Planet, but Larry has discovered his father had once been a famous villain and decides to follow in his footsteps.

Using some of Lex’s designs Larry enters into a life of crime.  His is caught by Superman, but he returns Larry to his parents, as a favor to Lois.  Needless to say, Larry does not give up the life of crime and eventually causes his father’s death when he attempts to stop him.  The story ends with “Black Luthor” fleeing into space to escape and Superman sets off to capture Larry, leaving Lois to think; “the sins of the father are visited upon the son”.

The second story is entitled; “Lois Lane, Millionairess”.  I do not know the writer of the story, it could be Siegel, but it could be someone else.  The pencil and inks are supplied by Kurt Schaffenberger.  The gist of this story is that Lois Lane gets to interview a recluse millionairess, who mistakens her for her long lost daughter.  But it turns out to be not quite that simple, as the millionairess is actually a disguised man, who heads a criminal gang.  The gang is out to kill Superman using a limo made out of green kryptonite covered in lead, that Lois is being driven to a charity event in.  Again don’t ask.

Oh, just for those keeping track, Superman discovers the gang’s plan and with the help of Supergirl isn’t killed by the kryptonite limousine!  You just got to love these 60’s stories!

Well that’s it for this RETRO REVIEW, but please come back next week for a new Fabulous Find.  Be seeing you …