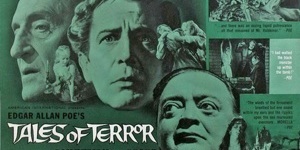 Tales of Terror is an anthology film featuring three short story segments connected by a short framing sequence, all starring Vincent Price.  In a twist on most Price films, he doesn’t play the bad guy in any of them, Roger Corman opting for Price to be more of a victim of evil in all three.  The Edgar Allan Poe stories adapted are Morella, a combination of The Black Cat and The Cask of Amontillado, and The Facts in the Case of M. Valdemar.

Let’s take a look at the film the New York Times referred to as “a dull, absurd, and trashy adaption!”

Synopsis of Tales of Terror

Tales of Terror is a journey trough 3 terrifying tales (see what I did there?), so it’s really 3 synopses.

In Morella, we see a depressed withering Vincent Price living in the shadow of his wife, Morella’s, death, going so far as to keep her decomposing body shrouded in her bedroom.  The child he blames for her death returns after many years and reveals to her father that she doesn’t have long to live. Due to some supernatural twist, Morella switches places with the daughter and inflicts her vengeance from beyond the grave.

The Black Cat is a blending of that story with the Cask of Amontillado, giving us a sociopathic drunken Peter Lorre.  As he bobs and weaves from oblivious drunk to leering devil, his peculiar brand of evil pulls both his wife and a social acquaintance (Vincent Price) into a very bad situation – being bricked inside the wall of his wine cellar.  He nearly gets away with his crime, but is foiled by the yowling of the cat he’s accidentally walled up inside the tomb.

Lastly, the Case of M. Valdemar asks what would happen if someone was being held in a mesmeric trance at the point of death.  Vincent Price plays Valdemar, in the clutches of an opportunistic hypnotist played by Basil Rathbone.  The hypnotist does his best to extort an opulent lifestyle with Mrs. Valdemar at his side as he holds Valdemar’s consciousness in limbo; however, the victim’s decaying corpse takes issue and our evil hypnotist meets his just end.

Things We Loved in Tales of Terror

Vincent Price not playing the villain and getting to flex his comedic muscles. Peter Lorre showing us what a sociopath really is.

We got three stories in one movie! Yay for anthology films!

We were so struck by the economy of Corman’s cinematography, especially in Morella.  Milking slow pans and the movement of the actors, building suspense and tension – all the while with just two people and a dark room is amazing.  Another great example is the tension between the actors in M. Valdemar.  Three people standing around a dead guy on a bed, voicing the audience’s moral outrage at the crime being committed, the innocents screaming at Basil Rathbone to STOP IT – just fantastic film making with zero special effects.

Also, the framing sequence should not be overlooked.  It almost stands alone as a fourth feature of the film, due to the excellent visual feel and Vincent Price’s velvety smooth delivery of the prose.  Great stuff.

Things We Didn’t Love in Tales of Terror

The lack of clear motivation for the conclusion of the first story.  The build up through the segment was so well done, that the sudden and abrupt “then everyone dies” was unfortunate and out of sync.

Mike was ok with the tone of the Black Cat, but Scott thought the jovial techniques, both in the cinematography and soundtrack were too out of place with the rest of the film.

Our Rating of The Premature Burial

Scott gives it a thumbs up.  Refreshingly fun and scary in a Halloween trick or treat sort of way.  I was a little put off by the stretch of the comedic elements in the Black Cat segment, but as usual Vincent Price made it well worth the jarring mismatch in tone.

Mike gives it two thumbs way up. This could end up being an annual Halloween season tradition for me.

What did you think? Let us know your thoughts and observations about the Tales of Terror in the comments.

For our next Watch It! we’re moving to the fifth of Corman’s Edgar Allan Poe movies: The Raven (1962), starring the awesome trifecta of Vincent Price, Boris Karloff and Peter Lorre.  Watch it by Monday, 9/29 and look for our next column!