The 1st Appearance of Wolverine! 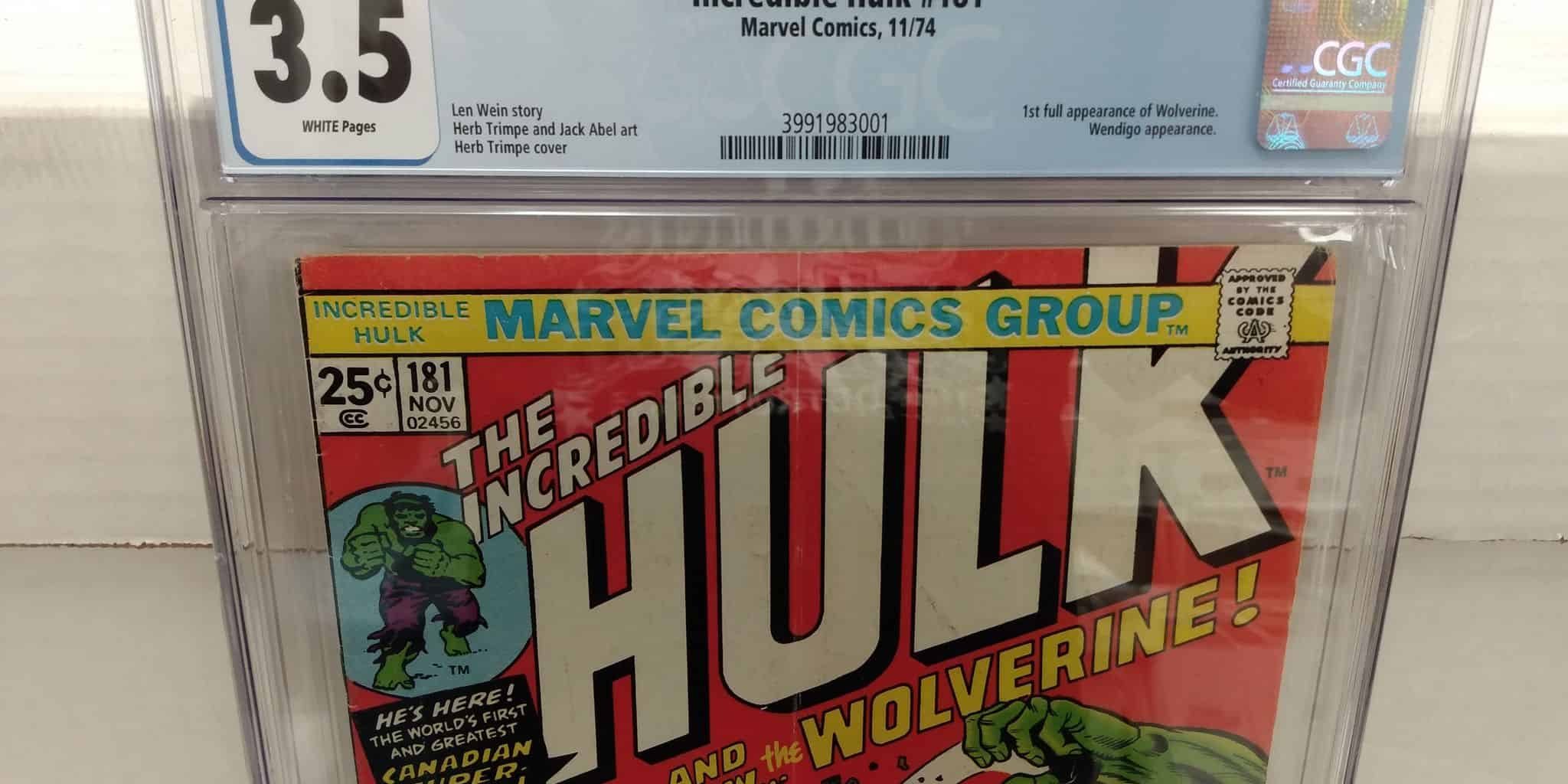 Welcome back to Consigned, Cool, & Collected! Each week, Back to the Past chronicles the stories behind the nifty stuff that passes through our doors. Today’s installment concludes a series we’ve been running on the gorgeous CGC graded comics coming to auction May 19-21! This particular specimen will be part of our in-person grand finale session at 6 PM on Saturday, May 21st. It is 1974’s Incredible Hulk #181, the 1st full appearance of future X-Man Wolverine, graded by CGC at 3.5. It presents overall nicer than the grade might suggest, but gets dinged by the subscription crease running right down the middle. 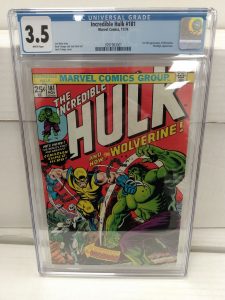 The copy of Incredible Hulk #181 coming to auction this weekend!

The Incredible Hulk in Canada

Incredible Hulk #180-181 featured the Jade Giant being lured to Canada by wannabe sorceress Marie Cartier. Her brother Paul has, in the depths of desperation, resorted to eating a dead friend when trapped in the wilderness by the icy northern winter. He assumed the curse of the Wendigo, being transformed into a man-eating monster of a size and strength on-par with that of the Hulk himself. Nineteen issues earlier, The Hulk had first encountered the Cartier siblings in an abortive to rescue Paul. Now, Marie plans to mystically transfer the curse to what she believes to be a simple-minded monster.

Unfortunately, The Hulk’s movements have been tracked by the Canadian government. They’ve activated “Weapon X”, a superhuman agent also known as Wolverine, to capture him. That’s where #181 begins, with Wolverine leaping into the middle of a battle between two monsters easily twice his size. He and Jade Jaws form a brief truce to take down the Wendigo before Wolvie is duty-bound to get back on mission.

Marie Cartier’s machinations briefly interrupt the fight when she knocks out the combatants and kidnaps them, but they go right back to fighting the second they wake up. The Hulk finishes the fight with a mighty blow that renders Wolverine unconscious, a testament both to his sturdy constitution and his lightning reflexes. He would cameo in the next issue, being pulled off the case for his “failure”, before joining the X-Men in 1975’s Giant-Size X-Men #1. 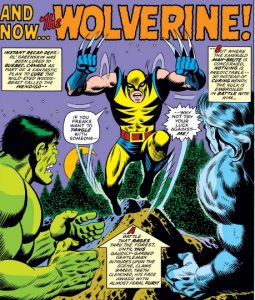 Time to Face The Strange Ch-Ch-Ch-Changes

Wolverine was created by writer Len Wein and artist John Romita, Sr. at the behest of Marvel’s then Editor-In-Chief Roy Thomas. He’d come up with the idea for a Canadian hero named Wolverine, who was short and bad-tempered just the animal. Wein was the one who worked up the angle of “Canadian super soldier” and “sharp Adamantium claws”, Adamantium having been introduced in Avengers #66 as the basis for Ultron’s body. Romita designed the character’s costume, and maintains that he intended the claws to be retractable. It is worth noting that Herb Trimpe, who actually drew the Hulk issues that introduced the character, never showed the claws at anything less than fully extended. Trimpe himself credits the creation to Wein and Romita, saying that he “shocked it life”.

When Wein received the task of revamping the X-Men with a new team, be brought his new creation with him. The All-New, All-Different team’s shtick was to be that they were international and Wolverine fit that perfectly- their Giant-Sized first adventure featured mutants from Russia, Germany, Kenya, Japan, Ireland, and Canada in addition to U.S. citizens. Wolverine’s recruitment in Giant-Size X-Men #1 (by Wein and artist Dave Cockrum) quickly established his claws as retractable, but they were still ostensibly part of his costume. 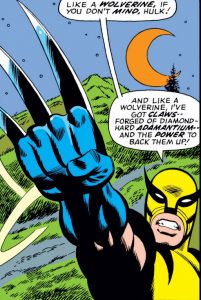 Wolverine brags on his Adamanitum Claws.

Wein’s intention for the character was that he would be a young man, in his 20s like most of the X-Men. Cockrum, working with witter Chris Claremont on Uncanny X-Men #98, changed that. Cockrum’s design for an unmasked Wolverine showed him to be in his 40s at least while Claremont wrote into the story the revelation that his claws were housed inside his arms – they were part of him.

“Mutation: it is the key to our evolution.” ~ Professor X

What is astonishing about Incredible Hulk #181 is that Wolverine is both immediately recognizable and nearly unrecognizable. The claws, the attitude, and the nationality are all there. Heck, even the costume is close – Dave Cockrum and Gil Kane would alter his mask for the X-Men, but that’s it.

On the other hand, nothing else is there. The claws aren’t shown to be retractable and are meant to be part of the costume, not the man. There’s no reference to unbreakable bones or healing powers, though he’s shown to be a tough enough SOB to go toe-to-toe with the Hulk. Heck, it’s not even clear he’s a mutant – it’s entirely possible that he only “became” one when Len Wein decided to add him to the X-Men!

The sheer improvisational and collaborative nature of Silver Age and newer comic books means that there are lot of characters in similar circumstances. It’s always fun to see how characters “iconic” versions contrast with their humbler origins. Key issues, like the ones coming to auction, are valuable collectibles but also fun pieces of comic history. If you’ve got some pieces of comic history you’re looking to sell, Back to the Past is here to help you! If you’re looking to buy them, check out our auctions May 19-21st. And if you’re just looking to read about them, Consigned, Cool, & Collected is here every Wednesday.