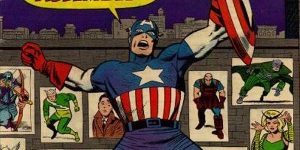 Once again it’s time for a new RETRO REVIEW, and again I’m feeling the love of Marvel Comics, so I went back down, deep underground, into the comic vault and brought back up Avengers # 16, cover dated May 1965.  It’s got a snappy Jack Kirby (pencils) cover that is inked by either Dick Ayers or Sol Brodsky.  Experts are still arguing over which gentleman inked over Kirby’s pencils.  I’m not expert enough to make the definitive call, are you? 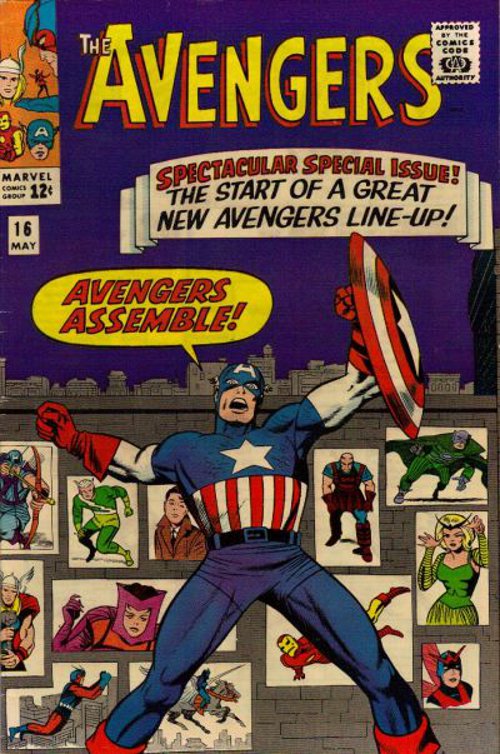 This is a milestone comic, as within it’s pages the original Avengers line-up changes.  Over at D C Comics, their Justice League of America comic just kept adding members, never really dropping members until many years later, and I mean many. many years, later!

The title of the story is; “The Old Order Changeth!” and it is written by Stan “the Man” Lee, with layouts provided by Jack “King” Kirby, with the finishes (final pencils and inks) completed by Dick Ayers, though some experts believe that Carl Hubbell may have also provided some art corrections over Ayers.  Again, that goes well beyond my capabilities!

The story begins with the Avengers already in the midst of battle with the Masters of Evil, which were made up of; the Executioner, the Enchantress, the Melter and the Black Knight.  Thor whips up a dimensional space warp, by spinning his Uru hammer,  and moves the battle from the streets of New York.  Unfortunately, only the Melter and the Black Knight are caught up in the warp.  Quickly the Avengers overpower those two members of the Masters of Evil.  More will be heard from the other two, but not in this issue.

The scene switches to Captain America, who is with Rick Jones, as they are finishing up there adventure against Baron Zemo, from Avengers # 15.  After catching up with Cap, the scene again switches back to Avengers Headquarters, where Iron Man, Giant Man and the Wasp, who are discussing leaving the Avengers but need to find replacements.  They are then confronted by Hawkeye, who has invaded Avengers Mansion and who was last seen battling Iron Man in Tales of Suspense # 57.

Hawkeye explains that he has come as a friend, not an enemy, and explains how he was led astray by the Black Widow into appearing to be a bad guy, but he really isn’t.  The three Avengers think Hawkeye would make a great replacement member.  Iron Man then contacts another enemy, the Submariner, and offers him a spot on the Avengers, he turns them down and says that he could never ally himself with any humans!  Hmmn, I guess he forgot his time with the All-Winners Squad during World War II.

Meanwhile Quicksilver and his sister, the Scarlet Witch see that the Avengers are searching for members in a Swiss paper and decide to apply, so they leave for America.  Once again the comic switches back to Captain America and Rick, making their way through the South American jungles and heading for home.

Iron Man holds a press conference in front of Avengers Mansion and tells all the world that Captain America will be leading a new team of Avengers and on the final page, Cap and his “Kooky Quartet” are they become known as, are introduced to the reporters, the public, as well as us readers back in 1965!

Say what you will about the power level of this team of Avengers, but they really were a fun group of heroes to read about.  Even back then, Quicksilver was brass and quick to take umbrage, the Scarlet Witch was still really learning to use her powers had a crush on Captain America, and Hawkeye, well he felt that he should challenge Cap for leadership of the team at every step along the way.

If you don’t want to own every issue, or can’t afford to own ,every issue of the Avengers, this is the issue you ought to add to your collection.  You won’t be sorry!  In fact, I recommend this entire “Kooky Quartet” run of The Avengers quite highly.

That’s all for this week, but please come back next week for another new Fabulous Find, and of course, I’ll be back with another RETRO REVIEW in two short weeks!  Until then, Make Mine Marvel.