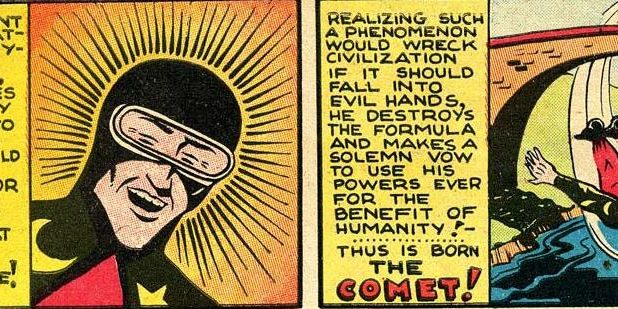 Welcome back to My Hero, wherein we here at Back to the Past tell you why the obscure characters from our custom action figure collection are great! Years ago, we purchased the life’s work of an artist and comic fan whose chosen medium was granting forgotten comic characters the action figure immortality denied to them by major toymakers. We’re still sorting through it all, and we’re making new finds every week! This week’s find, who will soon be available on ebay, is The Comet. He kicks off a four week series on Archie Comics’ superheroes.

The Origin of The Comet 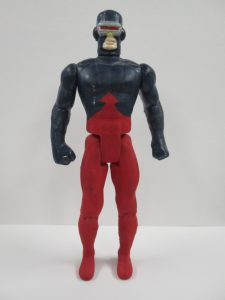 The Comet as he appears in the Custom Action Figure Collection

Young scientist John Dickering discovered a gas fifty times lighter than air. Naturally, he started injecting it into his bloodstream – nothing could go wrong there. He soon discovered that these injections had granted him the ability of flight, so he continued doing them. Eventually, beams of pure destructive force came shooting from his eyes thanks to these injections. Stopping them using a simple glass visor, John decided the world probably wasn’t ready to share in his discovery and destroyed his formula. Stuck with this news powers, he put together a superhero costume and began battling crime as The Comet! His adventures appeared in the first seventeen issues of Pep Comics, a title headlined by Archie’s top hero The Shield.

In his final Golden Age outing, The Comet took a bullet meant for his brother Bob Dickering. He became the first superhero to be explicitly killed off, with his brother taking up the vigilante identity of the Hangman to avenge him. The Comet would return in the Silver Age, though it was through a circuitous route. First, a brand new alien hero with the hots for Fly-Girl appeared in the pages of Fly-Man. Then, that character was retconned into being John Dickering in the pages of Mighty Crusaders #2. A back-up story in that issue explained, in confusing brevity, how The Comet came to be the king of an alien planet (complete with a new costume and powers). 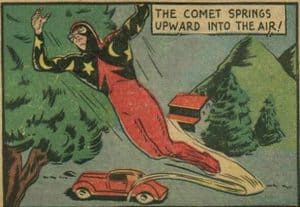 The Comet from Pep Comics #3. Note that our customizer chose to omit his moons and stars, otherwise nailing the look.

Unlike most characters chronicled in this column, there has been an auction figure of The Comet! In 1984, Archie Comics brought back its superheroes with the Red Circle Comics imprint. The flagship title of the line was the second volume of The Mighty Crusaders team book, the longest running one in the franchise’s history. Toymaker Remco released eight action figures, four heroes and four villains, as a tie-in to the series. The Comet was one of the heroes included. That said, the figures were of low quality compared to the contemporary DC Super Powers Collection and Marvel Super Heroes Secret Wars figures being released the same year by Kenner and Mattel. To get a figure that looks good alongside those Kenner, Mattel, and Toy Biz superhero figures (because its made from them, with The Comet notably borrowing Cyclops’ head), you need a custom figure like the ones in our custom action figure collection. Speaking of which, if you’ve got collection like it – be it original art, custom action figures, convention sketches, whatever – and are looking to sell it, get in touch!