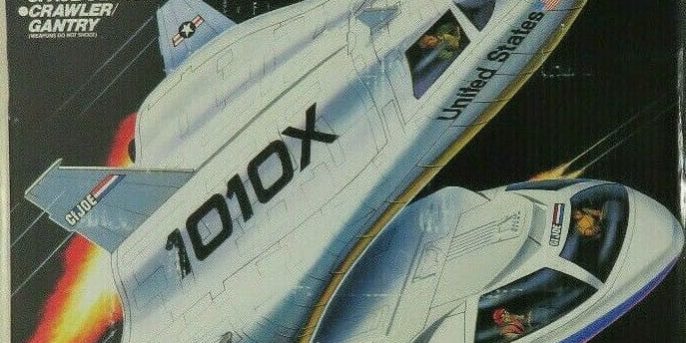 Welcome back to Consigned, Cool, & Collected! Every week, Back to the Past stops for a moment to gush about one of the cool items we offer, and this week is no exception. In the not-so-distant past, we sold a mint-in-box U.S.S. Flagg, the legendarily gigantic G.I. Joe: A Real American Hero aircraft carrier. Today, we’ve got the similarly mega-sized Defiant space shuttle and launch complex toy/playset listed for $12,000!

Editor’s Note: In between the writing and publishing of this piece, it sold! Just goes to show how highly prized the Defiant is! 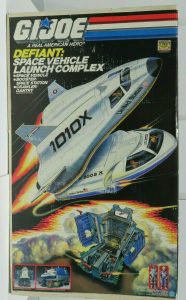 The Defiant: Space Vehicle Launch Complex as it appears in our eBay store.

The Joes Get Their Own Space Shuttle

1985 saw Hasbro introduce the U.S.S. Flagg to their smash hit 3.75″ scale G.I. Joe toyline. The small scale of the action figures allowed Hasbro to create one of the wildest vehicles/playsets ever devised: a seven foot long aircraft carrier with multiple decks, elevators, and support vehicles. It could serve as the HQ for all your Joes and more. It retailed for $89.99, which is about $230 today. Despite the high price tag, it was a success for the line. Hasbro wanted a follow up.

The follow up came in 1987, in the form of the Defiant: Space Vehicle and Launch Complex. It boasts a space shuttle-esque fighter vehicle, a manned booster vehicle, and rolling launch complex that can be tilted up to “launch” the spacecraft. The set comes with not one but two vehicle driver action figures, one for the space vehicle and one for the launch complex. While nowhere near as long as the Flagg, Defiant’s bulkier pieces lead to its box being noticeably larger than that of its predecessor. Recommended retail price was $100, or $245 in 2020 dollars. The space shuttle would be re-released in 1989 individually as the Crusader.

Curiously, 1987 is not the year we would pick to put out a toy space shuttle. Particularly a weaponized one. January 28, 1986 saw the Challenger, one of NASA’s five space shuttle orbiters, explode shortly after launch. Compounding the tragedy, the mission was part of NASA’s “Teacher In Space” outreach program. Schoolteacher Christa McAuliffe was part of the crew, and schools all over the nation were watching the launch live on TV. Thousands of children got to watch the Challenger explode, the worst space disaster in decades, live. At the time the Defiant hit shelves, the shuttle fleet was still grounded as investigations into the Challenger disaster progressed. 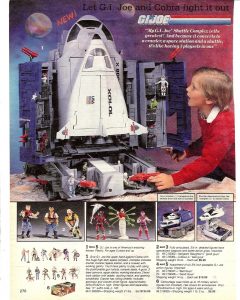 Catalog ad for the Defiant, featuring child for scale.

Of course, the Teacher In Space program had brought a lot of positive attention to the space shuttle program prior to the disaster. It revitalized American interest in space travel in a big way, which is part of why the tragedy became such a major touchstone. We don’t mean to speculate, but it seems plausible that Hasbro was a little stuck with money sunk into development of the over-sized toy when the disaster occurred. Note that the Defiant itself isn’t described as a space shuttle, but the retooled Crusader would be two years later is.

Either way, proximity to the tragedy didn’t seem to hurt the Defiant any. It boasted the same two year lifespan on toy store shelves that its predecessor, The Flagg, did. And, like the Flagg, it’s become a bit of a white whale for Joe collectors over the years. See, if you buy your kid a $245 (in modern dollars) toy, you generally want them to open it and get some use out of it. Likewise, the collector market for action figures was still in its relative infancy in the 80s. These two factors combine to mean that very few mint-in-box specimens like ours still exist!

Additionally, the G.I. Joe: A Real American Hero line was big on “free” mail away action figures. To get them, you had to send in the bar codes off of the toys purchased off the shelf. Even when an unopened toy went into storage, that Proof of Purchase nearly always got clipped out. That was the case for the U.S.S. Flagg we sold, but not this Defiant. Its box looked like it could have been discovered in a forgotten corner of a Toys R Us warehouse, untouched.

Furthermore, it can be next to impossible to find a loose specimen that’s complete. As YoJoe.com succinctly puts it, “There are many easily lost pieces.” A set this big and elaborate has lots of small parts, the exact kind that love to find their way under the couch and up into the vacuum cleaner. Simply put, specimens like ours aren’t something you see everyday! We are pleased as punch to have this specimen available in our store. Likewise, we’d love to help you sell your action figure collection when the time comes. Until then, join us every Monday to find out about more stuff fit to be Consigned, Cool, & Collected.