Owning A Piece Of History 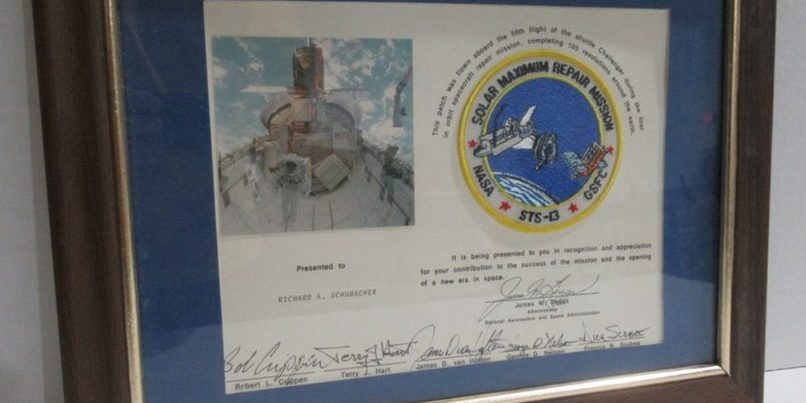 Welcome back to Hammer Drops! Each week, the collectibles specialists at Back to the Past share our collective decades of experience with you, our adoring public. This week, we’re looking at some pieces from the NASA collection we’ve been handling. Specifically, we are looking at what they can tell us about how what a piece “experiences” can add to its value. 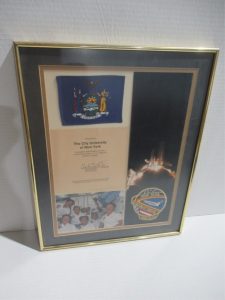 To Outer Space And Back Again

We are looking at a series of patches and flags, with NASA certificates, that came up in various recent auctions. All of them have one thing in common: they’ve been to space, and you (probably) haven’t. One of the most interesting, if not valuable, pieces is a used heat shield tile. It’s a one-inch square off one of Discovery’s wings. This small piece of shielding helped to bring a crew of astronauts home alive. That makes for a very neat piece, and it sold for a respectable $120.

The other pieces we’re talking about are mission patches or flags that went into space with one shuttle or another. Each is mounted in a nice frame, and includes some sort of certificate attesting to its authenticity. They all sold for between $150 and $200. For reference, box lots of unused NASA patches sold for an average of $40 in our Golden Days: Estate Finds & NASA Memorabilia session. 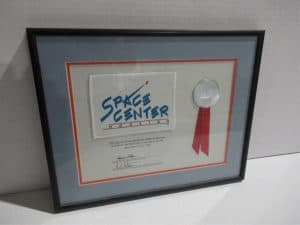 There were 133 successful mission performed by the U.S. space shuttle program. While each of those mission undoubtedly created quite a few pieces of memorabilia like these, that’s still not a lot of missions in the grand scheme of things. There is a limited number of items in this world that have flown into space and returned. The vast majority of them are in various government archives. That makes the few that are given as gifts, like these patches and flags were, more desirable to collectors.

And there are quite a few collectors for this kind of item. The space program represents an achievement that all Americans can be proud of. The exploration of outer space has captured imaginations around the world for over a century. There are millions of people out there who would put an item that flown into space on their wall. We can only imagine what the toupee that William Shatner wore into space will sell for one day.

Which brings us to the more broadly applicable part of the lesson: it doesn’t just apply to items that went into space. Movie and television props, NASCAR car parts, presidential memorabilia, there are plenty of otherwise common items whose uncommon use makes them valuable. 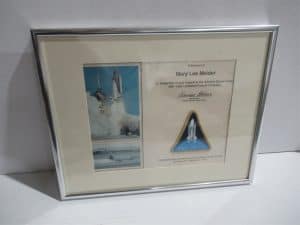 Of course, there are limits to that. In short, you need to be able to prove that the item was used in that uncommon circumstance. No one’s going to trust your word on that. You may even believe it is true, but maybe your source lied to you. That’s why a combination of certification and sourcing are important. Using these pieces as examples, they all have NASA certificates and came to us from the estate of a NASA Ambassador. Not only does the part who made them vouch for them, they were initially collected by a person who demonstrably knew his stuff very well.

Our own mission commander, Scott Lovejoy, points out the fact that we’re handling the sale of the collection is another point in its favor. Not to toot our own horn, but we’ve been in the collectibles auction game for more than a decade now. We’ve built a reputation of honesty, transparency, and quality.

Which why we recommend letting that reputation help you. Even if you’ve got the certification and the provenance to confirm the item, you may not be able to reach the audience we can. It’s our job to bring genuine vintage collectibles to market, and people know that. People trust that we do our homework, and we take that trust seriously. If you keep tuning in, we’ll keep sharing our wisdom every Wednesday here in Hammer Drops.