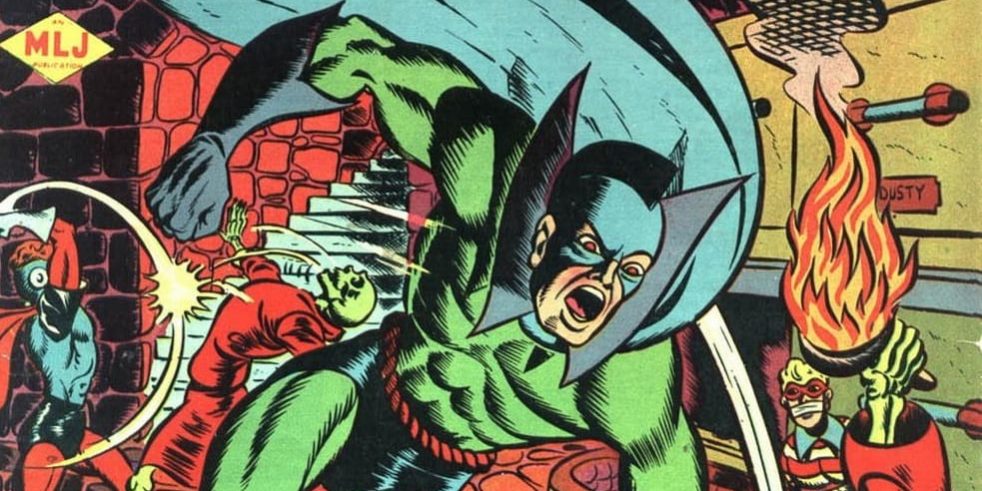 Welcome back to My Hero, wherein we here at Back to the Past tell you why the obscure characters from our custom action figure collection are great! Years ago, we purchased the life’s work of an artist and comic fan whose chosen medium was granting forgotten comic characters the action figure immortality denied to them by major toymakers. We’re still sorting through it all, and we’re making new finds every week! This week’s find, who will soon be available on ebay, is The Comet’s brother The Hangman! 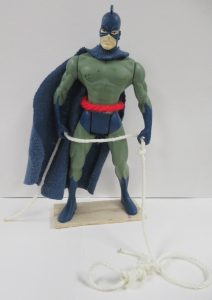 The Hangman as he appears in our custom figure collection.

The Death of The Comet

As we mentioned last week, The Comet was one of the very first superheroes to be killed off on-panel. His death inspired his brother, Bob Dickering, to take up a costumed identity of his own. Armed with naught but a shadow puppet of a hangman’s gallows and his own two fists, Bob became The Hangman! He battled crooks and spies through thirty issues of Pep Comics and seven issues of his own series before superheroes went out of style at the soon-to-be Archie Comics.

Like most all of Archie’s superheroes, The Hangman made a return in the Silver Age of Comics. Unlike most of them, it was as a villain! We blame his somewhat gruesome gimmick for that. He was explicitly stated to be the same Hangman, with The Shield lamenting that an old crimefighter had gone bad in his first 60s era appearance. He’d picked up the ability to mentally command rope at some point in the interim. making him a bit more of a threat to the super-powered Mighty Crusaders. 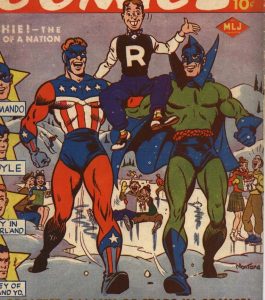 The Hangman alongside his Pep Comics co-headliners The Shield and Archie Andrews.

The 80s revival of the Mighty Crusaders under the Red Circle label saw The Hangman return to heroics. Both the original and his son appeared, with the former having made peace with his brother and the rest of the Mighty Crusaders. Both of the DC Comics reboots of the Mighty Crusaders (under the Impact Comics and Red Circle imprints) revamped The Hangman as a supernatural avenger in the vein of DC’s own Spectre or Archie’s own Mr. Justice. The most recent reboot, 2013’s New Crusaders, split the difference between the character’s Golden and Silver Age appearances: he still considered himself a hero, but his murderous antics with ropes had gotten him tossed in jail.

As you might imagine, The Hangman was not included when Remco made their limited run of Mighty Crusaders figures. If you want him on your shelf, you need a custom figure like the ones in our custom action figure collection. Speaking of which, if you’ve got collection like it – be it original art, custom action figures, convention sketches, whatever – and are looking to sell it, get in touch!