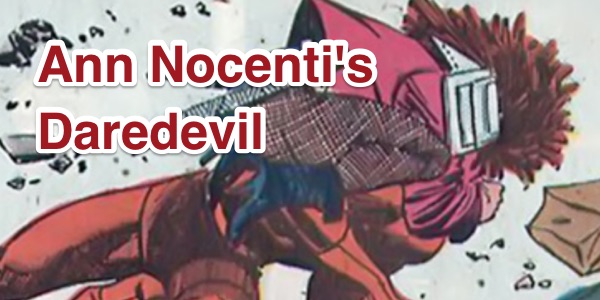 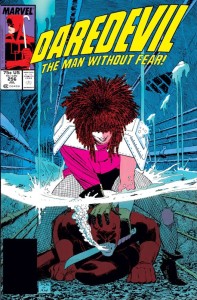 (This guest editorial was flung from a bus window by M. Lapham as he passed the store. Please enjoy. -ed.)

I am all for more female comic creators, since a good writer is a good writer and a good artist a good artist.  Talent is always in demand.  I don’t like it however when creators from the past are forgotten solely because their existence is inconvenient for those who want to cry foul.  So, with Daredevil season 2 still fresh in people’s minds why not talk about Ms. Nocenti’s run?

You should recall that Daredevil was not an easy book to write, when she started.  It was only a few issues after Miller’s “Born Again” story, which is often called the BEST DAREDEVIL STORY EVER.  How do you step out of that shadow?  Well, if you’re Ann Nocenti, you throw everything you have into the book without pulling any punches, no matter the political or sociological topics.  There are even letters published where fans decry her for being too liberal, after only her first story.

For all the unique natures of Nocenti’s Daredevil tales, her social commentary have links to previous writers like Denny O’Neil and Steve Gerber.  Her stories about her perceived ills of society fit into one of three categories: Using struggles as a source of drama, exploding them out to an insane degree, or using allegory.  This is a welcome change from some modern tales that walk a similar line.

While stories clearly had points to make, they never seemed like lectures.  Even if you didn’t agree with the sentiment, you could still enjoy the story.  It was story and character, first and foremost.  More Boston Legal than a college professor on a socio-political diatribe.

Topics included the perils of trickle-down economics, mental illness, the fear of nuclear holocaust as experienced by the neglected child of a government sponsored super agent. So it only seems likely that such a socially tuned-in person would write about what it is like to be a woman, right?

What it was like to be a woman was written about primarily in two stories, both of them were based on the idea of dichotomy.

The first was Ann’s most famous creation, Typhoid Mary.  Typhoid Mary was actually two people in one body, due to multiple personality disorder.  Typhoid was a sexually aggressive assassin, while Mary Walker was a sweet, shy, innocent. Later stories by Nocenti would introduce Bloody Mary, a murderous psychopath.  In the Daredevil run though, there were only the two.

Later retconned as a prostitute who was accidentally shoved out a brothel by none other than Matt Murdock, her original origin was far more tragic.  Mary was one of the finest actresses of her generation, until she fell into the depths of mental illness, never to be whole again.

The dual nature of the character, with only Typhoid knowing that there were two, actually led to one of the great dichotic moments for Daredevil.  Daredevil unable to see can’t tell the two identities apart, due to some strange change in heartbeats.  While he finds Typhoid repulsive, he falls for Mary and cheats on his gal Karen Page.  Clearly bad, but when Karen Page breaks up with him, he agrees what he did was wrong, without any argument.

Yet, it wasn’t all that long ago that Karen Page was literally responsible for ruining Matt Murdock’s life simply for a hit of heroin, and he forgave her, free of any resentment.  This is never brought up from Matt as the relationship ends.  Even in his immoral moments, Daredevil refuses to take the cheap shot. He admits his wrong doings.

Another example is with two minor characters. One the poor little rich girl who has every liberal cause under the sun and often times resorting to extreme measures, the other a Stepford Wife genetically engineered to be the “perfect” companion.  To say the two do not see eye-to-eye is an understatement.

Some have said this was Nocenti’s reflection on being a woman in a sea of male comics creators. I have no proof one way or the other, but that is not my theory.  I think she was simply writing about it was to be a woman in the 1980s.

With no clear answers many women felt torn between the traditional femininity and the new form they had fought for, it was certainly no help that professionally and personally they felt pulled in different directions… not even always the same pull from the same side.  To me, this is what Nocenti was distilling into the page.

Under her watch, Daredevil even encountered the actual Devil… well, Mephisto.  What’s more he made no deals (I’m looking at you, Quesada).  She then did something regarded as controversial, but something I always liked. Daredevil left New York.  Seriously, every now and again it’s good to see life outside of Manhattan.

Without the constraint of the city, Daredevil now dealt with more personal problems as he dealt with people one-on-one.  It was a period of good character moments, and stories unique to the Marvel universe.

Eventually Daredevil returned to New York, lost his memory and lived as a boxer, and had to reclaim his identity in the face of the likes of Kingpin and Bullseye, who now masqueraded as DD.

Love or hate the run of Ms. Nocenti, no one can deny that it was something never seen before or since, and one of the things I love the most is that it could only be done in comics.

The point of all this is simple. Although the road through gender imbalance in the traditionally boy’s club of comic books has definitely been rocky and uphill, Ann Nocenti is a great example of someone who has successfully navigated that road. Overlook this fantastic female writer at your own peril!

Now since Back to the Past is hosting my article, I’ll do my part to point you at some comics you need to buy.  So, here are some comics to look for in the back issue bins or trade paperbacks: