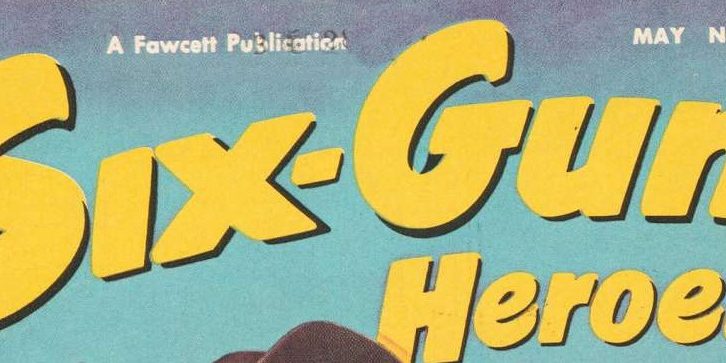 Howdy, pardners! We’ve got a real daisy of an auction coming up this weekend, featuring hundreds of vintage BB and cap guns in the western style. It inspired us to look at the most cowboy characters in American popular culture, specifically the four cowboys we think were the most influential. Let’s kick things off with an unexpected pick: 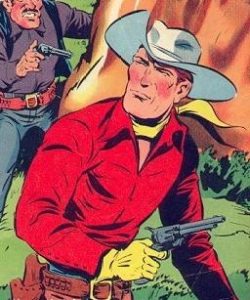 Red Ryder, as he appeared in comics for decades.

If you’ve watched the classic flick A Christmas Story, you’ve heard of the Red Ryder BB gun. What you may not have realized is that he was an actual character, star of a daily comic strip from 1938 to 1965. His heyday was in the 40s, right around the time Ralphie wanted his BB gun. The character appeared in a whopping 27 movies between 1944 and 1947, starred in a thrice weekly radio series from 1942 to 1951, and headlined a comic book series from 1939 to 1955. Red Ryder was a massive pop cultural force in his day, a half century ago.

But Red Ryder lives on through licensing! The Red Ryder BB Gun that Ralphie so desperately wanted for Christmas? It was based on a real BB gun made by the Daisy Air Rifle Company of Plymouth, MI. It’s still made to this day, as a matter of fact! While his staying power as BB gun mascot is undeniable, Red Ryder’s lasting contribution to pop culture is branding. JC Penny stores around the country featuring “Red Ryder Corrals” where the youth of America could find his branded products. If you or your kids walked around with shirts, toys, shoes, water bottles, toothbrushes, et al branded with their favorite characters during elementary school, y’all followed a trail blazed by Red Ryder fans. 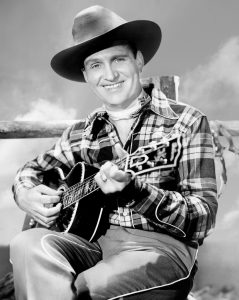 Gene Autry with his guitar.

If you’re a big movie dork (or a particularly voracious Netflix user), you probably watched The Ballad of Buster Scruggs a few years back. The title segment of the anthology stars Buster Scruggs, an upbeat singing cowboy and deadly gunslinger. He’s a parody of the whole “singing cowboy” genre, a type of western aimed at kids and starring singers the heroes. All the roping, wrangling, and gun slinging of your usual western with poppy musical numbers mixed in. The thing, that entire genre started with just one guy – Gene Autry!

Gene Autry moved from Oklahoma to New York City in 1928 in the hopes of starting a career as a professional western singer. He signed a record deal with Columbia Records in 1929,  and quickly became a bit of star. Gene was a regular on radio show National Barn Dance (precursor to the Grand Ole Opry) for four years. But Hollywood, specifically Republic Studios, came calling in 1934. He would do 44 movies for them as a fictionalized Gene Autry, heroic singing cowboy by 1940. Other studios brought out their own imitators, most famously Roy Rogers. While Roy gets the name drop in Die Hard, he doesn’t have a career without Gene. 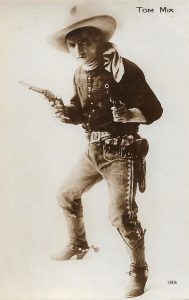 Some actors just have the right look for westerns. Sam Elliot and John Wayne come immediately to mind, both having been lifelong actors who just look right as cowboys. Tom Mix was one such actor, but he looked the part for a reason: he’d lived it! Mix first came to national attention while working for the Miller Brothers 101 Ranch in Oklahoma. Mix secured a spot in the ranch’s touring Wild West Show, where his skills as a horeseman, with a lasso, and as a crack shot thrilled crowds and won awards.

He made his film debut as himself in the “documentary” Ranch Life in the Great Southwest in 1910. The film was a hit, and propelled Tom Mix to stardom. Tom Mix would go on to appear in about 290 films, all but nine of them silent and many of them shorts. In the early days of popular cinema, his films invented most of the cowboy tropes we know today. Mix would die in 1940 at the age of 60, having seen his influence shape American cinema from its earliest days.

1) The Lone Ranger – The Cowboy Superhero 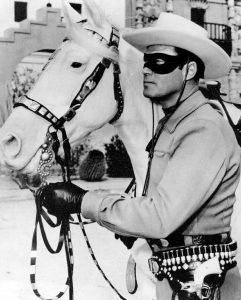 Promo picture of Clayton Moore as The Lone Ranger.

We may be biased, but the Lone Ranger has earned the top spot through sheer longevity. Created by Fran Striker and George W. Trendle for Detroit’s WXYZ radio station, The Lone Ranger debuted on January 31, 1933. John Reid is the lone survivor of a Texas Ranger Posse. The posse was lead by his brother Dan on the hunt for outlaw Butch Cavendish. Cavendish found them first. Left for dead, John gets rescued by solitary Native American Tonto. Nursed back to health, John donned a mask and took up the identity of The Lone Ranger! To the rest of the world, John Reid died alongside his brother while The Lone Ranger roamed the west fighting evil in all its forms.

The radio show would run for 21 years for a total of 2,956 episodes.It was adapted as a pair of film serials in 1938 and 1939. From 1949 to 1957, the radio show was adapted as a TV series – one of the first. Starring Clayton Moore as The Lone Ranger, it would run for 221 episodes across eight seasons. It was directly followed by two theatrical motion pictures, with feature-length reboots coming in 1981, 2003 (as TV movie on The WB), and most recently in 2013. The character has been adapted into dozens of comic books and newspaper strips over the decades. In fact, the most recent comic came out in 2018!

The Lone Ranger is an early prototype of what we’d now call a “superhero”. Since superheroes currently rule the American pop cultural roost, it’s worth toasting their predecessors like The Lone Ranger.

Who did we miss?

All four of these classic cowboys, and many more, are well represented in our Wild West: Vintage Cap & BB Gun auctions! Bidding is open right now and closes this weekend. If you’ve got vintage toys like these but don’t know where to sell them, well now you know who to call. For the right collection, we’ll travel across the country – do not let geography dissuade you!

Those are the four pop cultural cowboy we think have had the biggest, most enduring influence on pop culture. Did we miss anybody important? Let us know in the comments! And if you want a comment or quote on something we’ve written about, we’re always available! We can be found dang near everywhere as @b2pcollect.