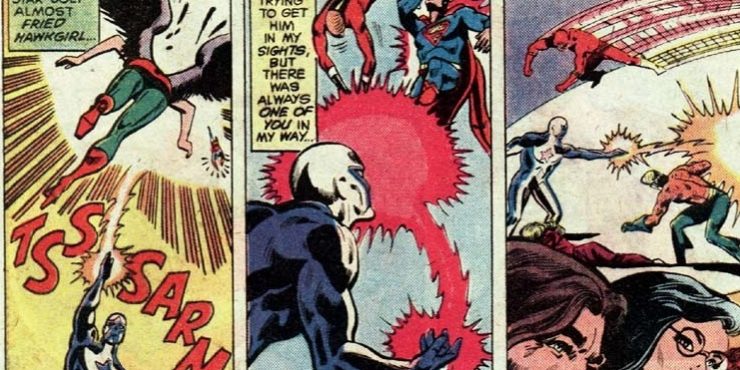 Welcome back to My Hero! Each week, Back to the Past uses this column to tell you why the obscure characters from our custom action figure collection are great! Years ago, we purchased the life’s work of an artist and comic fan whose chosen medium was granting forgotten comic characters the action figure immortality denied to them by major toymakers. We’re still sorting through it all, and we’re making new finds every week! This week’s find, who will soon be available on eBay, is The Star-Tsar.

We’re covering him this week to celebrate DC League of Super-Pets, now playing in a theater near you! See, he’s a Justice League villain. Well, three of them actually. 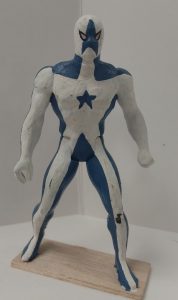 The Star-Tsar as he appears in our Custom Action Figure Collection!

1977’s Justice League of America #149 features the League being drawn into a super-villain gang war. Their old foe Dr. Light and new supercrook The Star-Tsar are battling each other thanks to their mutually exclusive plots for world domination. Both have similar powers, manipulating light in various forms. The massive melee doesn’t go in the villains’ favor, and both are captured by the JLA. The Star-Tsar is unmasked and revealed to be…their former teenager hanger-on, Snapper Carr?

Snapper is down on his luck these days. His very public status as the League’s mascot brands him a bit of a joke to the wider world. Since leaving their ranks, he’s struggled with unemployment as a result. Except Snapper’s not the man behind the curtain. No, Carr got the Star-Tsar equipment from the JLA’s old foe The Key! Who in turn got it from the JLA’s probationary member The Privateer. It seems that the pirate-themed superhero has been plating both sides of the fence the whole time he’s been with the team. The Justice League defeats the two hardened Star-Tsars with the help of Snapper Carr, who they decide to let slide.

The Star-Tsar makes his return in Justice League of America #181! He battles with Green Arrow and Black Canary, putting the latter in the hospital. The Justice League assembles at their fallen comrade’s bedside, where they prevent Green Arrow from feeding Snapper Carr his teeth. Snapper’s been on the straight and narrow ever since his last run-in with the JLA, working a straight job at an observatory. 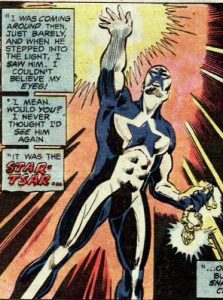 Star-Tsar from Justice League of America #181.

Snapper had opened up about his past to his co-worker, astronomer Richard Rigel. This proved a mistake, as Rigel stole the Star-Tsar equipment from Carr and embarked on his own criminal career. First off, Rigel was entirely too ready for a life of crime. Second, the Justice League goofed up letting Snapper keep his supervillain duds. Oh well, water under the bridge.

Here’s the problem: unlike the earlier Star-Tsars, Rigel knows a thing or two about stars. Things like how to create red sunlight to rob Superman of his powers. Green Arrow manages to put the newest Star-Tsar out of commission with a “smog arrow”. Working on the theory that smog blocks starlight from reaching major cities, he crams some pollutants into an arrow and uses it to coat the Star-Tsar costume. Which sounds like GA indulging in some fuzzy tree-hugger logic but it does work.

We really like the Star-Tsar’s costume. It is dynamic and timeless without looking too generic, he’s got a great Bronze Age villain design. But sadly, we seem to be in the minority on that. Star-Tsar doesn’t appear again after 1980. He shows up as a footnote in The Privateer AKA Manhunter AKA Leviathan’s history, if at all. Which is a shame: the fourth Star-Tsar feeds the JLA their lunch for most of his one appearance!

Most mind-boggling the lack of animated appearances. With a great look like Star-Tsar’s, it’s a no brainer to put him into Justice League Unlimited or Batman: The Brave & The Bold. Both cartoons plumbed the depths of Who’s Who in the DC Universe to fill out crowd scenes with obscure baddies…but not with Star-Tsar. As such, the only way you’ll ever get to pit you Super Powers Collection or Total Justice figures against him is through our custom action figure collection.