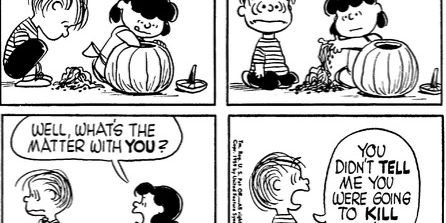 Yep, that’s correct the Great Pumpkin made his first appearance, well to be exact, got his first mention in Charles Schultz’s Peanuts strip on October 26, 1959.  Exactly fifty-one (51) years ago today!

The Great Pumpkin was mentioned by Schultz’s character Linus and was “featured” in a eight strip/day sequence beginning on October 26th.  Linus didin’t even make it to the ol’ pumpkin patch in 1959, that was to take place the following year, in 1960.  In 1959, he happily explains to his sister, Lucy, and his friend, Charlie Brown, about the Great Pumpkin’s epic overnight journey round the world to bring gifts to all the ‘sincere’ little boys and girls!  He even sends his first letter to the Great Pumpkin and attempts to organize a sing-a-long of pumpkin carols!  His belief is definitely sincere and heartfelt, heck, even steadfast!

This sequence was simply the beginning of many years of disappointment for Linus, though he has spent many a year dragging one of his friends, or relatives, even Snoopy, out to the ol’ pumpkin patch to await the Great Pumpkin’s arrival.  But to Linus’ chagrin, the Great Pumpkin has failed to appear in his pumpkin patch!

These yearly sequences would be utilized in the 1966 telecast of the animated; It’s the Great Pumpkin, Charlie Brown, an all-time favorite in many a heart across America!  And it all got it’s beginning fifty-one years ago today!