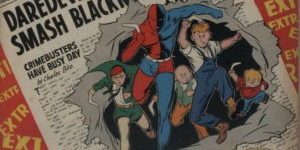 Welcome back to My Hero, where I dig through the boxes in our Custom Action Figure Collection and pull out treasures…before explaining to you why they’re treasures. This week’s hero is Daredevil – no, not the one played by Ben Affleck, the original!

1940’s Silver Streak Comics #6 introduced a new feature to the anthology, a two-toned adventurer named Daredevil who battled Nazis & racketeers with metal boomerangs! Young Bart Hill was orphaned by crime during a family trip to Australia, where he was taken in by a tribe of aborigines and taught to hunt with a boomerang. Donning a red and blue costume, he would return to the United States to battle crime as a vigilante superhero.

Daredevil’s strip proved popular enough to land him his own title in 1941, with the first issue featuring him leading his fellow Lev Gleason Publications heroes against Adolph Hitler himself. Bart would pick up a group of kid sidekicks in the Newsboy Legion mold in 1942’s Daredevil Comics #13. Called The Little Wise Guys, the brave but bumbling band of young boys from diverse backgrounds would appear in every single issue of the series until they ultimately pushed the hero out of his own title with 1952’s Daredevil Comics #70! The series would continue to star them until it ended with issue #134 in 1956.

Despite losing his self-titled series to his sidekicks 68 years ago, Bart Hill has had a minor resurgence in the last thirty or so years. The character has long since fallen into the public domain and his striking design has made him a favorite choice for prominent use in Golden Age throwbacks. I first encountered him in the pages of Dynamite Entertainment’s Project: Superpowers, where he was called “The Death-Defying ‘Devil” to avoid conflict with Marvel’s trademark. They added some supernatural elements onto his story, in keeping with modernization most of the headlining characters were given.

My favorite modern use of the character, however, has to be in Savage Dragon. There, he’s literally the unchanged Golden Age version brought forward in time to adventure with the Dragon family. He’s even called Daredevil, because Erik Larsen doesn’t plan to spin the character off as a solo act.

When a character’s steadiest appearances come as a supporting character in late period issues of Savage Dragon, you’re highly unlikely to warrant a mass-produced action figure any time soon. You are, however, ripe for some hand crafted custom figure love and can be My Hero.