The Curious Classiness of Playboy 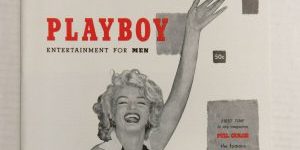 Welcome back to Consigned, Cool, & Collected, wherein we’re taking a look at some Playboy Magazine items that have passed through our doors of late. Specifically, we’re looking at the articles and comic strips – not the naked ladies – and explaining why they set a higher bar of quality than other famous men’s mags like Hustler and Penthouse. A word of warning: the article itself is safe for work, but some of what I link to is…well, it originally appeared in Playboy. Click wisely.

It is worth noting that what we had was a fairly faithful 2014 reprint of the legendary original issue, but it’s still super cool. The magazine was born in a makeshift office in Hugh Heffer’s kitchen, featuring mostly reprinted material – including the famous Marilyn Monroe pictorial.

That existing content included a short story from Ambrose Bierce, the Civil War veteran-turned-author who ranks up there with H.P. Lovecraft and Edgar Allen Poe in terms of early horror fiction, whose satire has been compared with Voltaire and Jonathan Swift, and whose war tales influenced Hemingway. Suffice it to say, he’s a tad more highbrow than your average nudie mag contributor and the inclusion of one of his stories (he’d been dead some forty years by the time the mag came out) was a deliberate tone-setter by Hef.

Beginning in 1962, after a few failed attempts to launch a humor mag with Heffner, EC Comics legend and Mad Magazine founder Harvey Kurtzman debuted an ongoing comic feature in Playboy. Titled “Little Annie Fanny” and featuring fully painted art from Will Elder, the strip started off as a ribald parody of Little Orphan Annie (hence the name) and quickly evolved into an ongoing satire on changing cultural norms.

Running on and off until 1988, with eleven installments per year at its height, Will Elder wasn’t the only artist who worked on the strip. Legends like Frank Frazetta, Russ Heath, and Al Jaffee joined Kurtzman on the strip at various points. The reason for all this? Heff was a onetime cartoonist himself and fan of the art form. Numerous Golden and Silver Age comic greats did work for Playboy from almost the very begining, including Plastic Man creator Jack Cole, but Little Annie Fannie was Playboy’s longest running “traditional” comic feature.

“I’ve committed adultery in my heart many times.” – Jimmy Carter

Perhaps the peak of Playboy’s mainstream legitimacy came in 1976 when they interviewed Presidential hopeful Jimmy Carter. Carter, a pious man and former peanut farmer, was a refreshing change from the Nixon-era corruption that tainted Carter’s opponent Gerald Ford, but the worry was that he was entirely too pious and saintly to be relatable. The solution? Talk to Playboy.

This lead, somewhat infamously, to his “confessing” that he occasionally had impure thoughts about women other than Mrs. Carter:

I’ve looked on many women with lust. I’ve committed adultery in my heart many times. God knows I will do this and forgives me.

The ploy seems to have at least not hurt his election chances, seeing as he was indeed America’s 39th President. He’s also maintained that “saintly” image to this very day in spite of those lustful thoughts, something precious few of his fellow White House alumni can say.

There’s always some kind of story behind collectible treasures, which is why it never hurts to let folks at Back to the Past look at them before you sell off a big pile for a song. And to hear those stories, keep coming back here for more Consigned, Cool, and Collected.