The Strange Tale of Captain Midnight 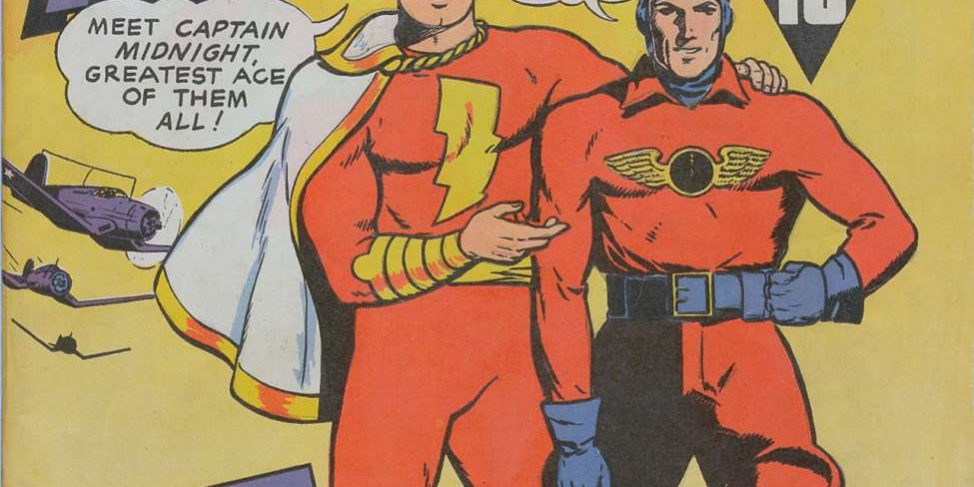 Welcome back to My Hero! Each week, Back to the Past uses this column to tell you why the obscure characters from our custom action figure collection are great! Years ago, we purchased the life’s work of an artist and comic fan whose chosen medium was granting forgotten comic characters the action figure immortality denied to them by major toymakers. We’re still sorting through it all, and we’re making new finds every week! This week’s find, who will soon be available on ebay, is Captain Midnight! 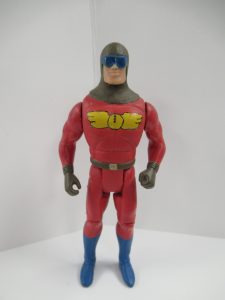 Captain Midnight as he appears in our custom action figure collection!

Born on the Radio

Captain Midnight debuted on October 17, 1938 as a nationally syndicated radio show. The good captain was ace pilot Jim Albright, leader of a paramilitary team of airmen tasked with battling spies and saboteurs known as The Secret Squadron.The radio series ran until 1949 and was a runaway success. It spawned comic strip that ran alongside it from 1942 until the end and was adapted as a film serial in 1942 as well. It was revived for television in 1954, preserving the basic premise with a few changes made for the shift in era.

Fawcett Comics Does Its Own Thing

Naturally, there was a comic book adaptation. Captain Midnight debuted in a self-titled series from Fawcett Comics in 1942 (big year for the Captain, it seems). Somewhat unusually, Fawcett Comics disregarded almost everything from the popular radio series. Their Captain Midnight was still Jim Alrbight, but that’s pretty much where the similarities end. Captain Midnight was no longer a call-sign but instead Albright’s superhero identity. Thus, it was a secret that he worked to preserve rather than simply a name he answers to. He’s even introduced to the reader by Captain Marvel, Fawcett’s top character, in the first issue! 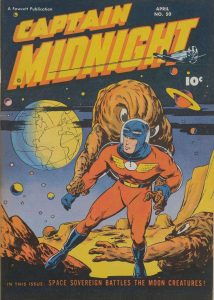 Captain Midnight #50, showing the hero about as far removed from his radio version as possible.

Instead of a pilot’s uniform, Fawcett’s Captain Midnight wore a superhero costume in bright primary colors. This served him well, because the costume included wings. No planes for this Captain Midnight, he flies under his own power! After the end of World War II, the series drifts even further from its radio origins. Captain Midnight develops his own rocket ships and begins battling alien creatures on distant planets. Superhero fighting aliens, two-fisted airman fighting spies, it’s all the same, right?

The comic ran until 1948, for a total of sixty-seven issues. At no point it did it resemble the radio version that it ostensibly tied in to.

That was it for Captain Midnight in comics until the 21st century! The TV show didn’t merit a comic tie-in, faithful or otherwise. And, as a licensed character, he was never really used by DC in their Earth-S stories starring Fawcett heroes. But the thing about creative works is that they eventually fall into the public domain, especially if their original owners are defunct. That’s the case with Captain Midnight, both radio and comic book versions.

The good Captain was revived by Dark Horse comics in 2013. That series received some critical acclaim and ran for a total of 25 issues – not bad for a hero who hadn’t appeared in 65 years! That said, Captain Midnight completely missed the era of every moderately popular comic getting a collector’s toy. So far as we know, there are no mass produced Captain Midnight action figures anywhere. But there is a custom made one waiting for you in our Custom Action Figure collection! And if you’ve got collection like ours, be it custom figures, original art, garage kits, convention sketches, whatever – and are looking to sell it, get in touch!