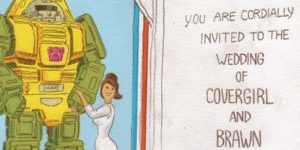 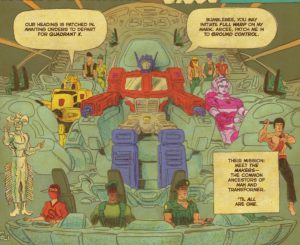 Welcome back to Strange Times & Places, where today we’re keeping up the Hasbro Universe theme from last week by reading Transformers Vs. G. I. Joe #1-13 by John Barber and Tom Scioli. Buckle up, it’s a thrill ride and spoilers will abound.

It’s a Royale With Cheese, blending various familiar elements of both franchises with new twists and turns.

The series shows a war between Cybertron, ruled by the despotic Megatron after the defeat of the Autobots, and Earth, defended by the G. I. Joe team, that will see the Invasion of Cybertron, the apparent destruction of Earth, the resurrection of an Elder God, and a great deal of ancient secrets revealed before it is through.

Despite being thirty issues, the series’ breakneck pace and Scioli’s splash-heavy art (which looks like Jack Kirby and Indie Comix got thrown into a blender in the best way) leave little room for expansion on certain ideas – even important ones, like the Headmasters. Even so, it’s one helluva page turner.

Come back Next Week for Tokusatsu Gesundheit!