It’s Friday and time once again for a new Fabulous Find, and this week, I’ve delved into the fanzine annex of the great comics vault, buried deep beneath my new house.  And let me tell you, it’s really tough to find a great house on a lake, with a secret vault already in place!

But have no fear, I finally found the perfect place and here is one of those fanzines I’m bringing to the light of day.  It’s Capt. Biljo Presents # 1, from the fall of 1968.  It is brought to you by the one and only super fan, Billy Jo White.  White was a firefighter by day and an amateur comic book writer and artist by night, or something like that.

White was very active in early comic book fandom and wrote and drew varies strips that were published in various fanzines during the sixties and into the seventies.  He is most famous for producing and editing the fanzine called; Batmania during the sixties.  And yes, I’ll get around to doing a Fabulous Find on that great fanzine in the future, so just hold your horses!

Anyway, back to Capt. Biljo Presents # 1.  Here is the cover to that twenty-eight pages fanzine, produced in glorious black and white: 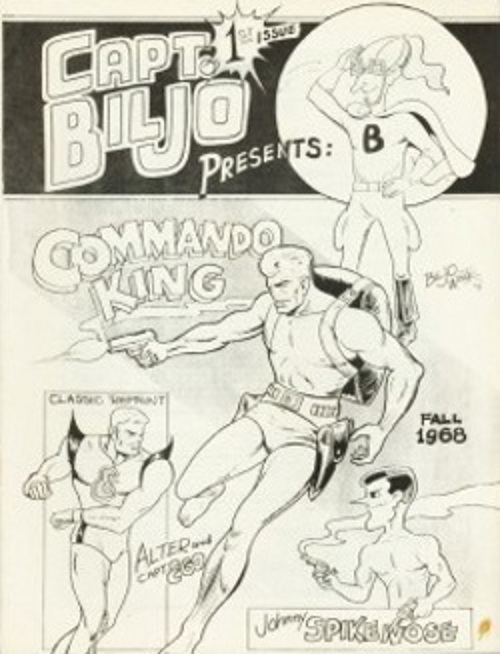 The fanzine’s front cover is done by White and is dated 1968.  The interior of the front cover has an editorial by White, explaining who Capt. Biljo is and about his recent appearance in a newspaper strip over in England.  His character appeared in a guest appearance in the strip entitled; The Cloak.  White goes onn to explain the title of the new fanzine and introduces, briefly the contents.

First up is an eight (8) page strip featuring a character called Johnny Spikenose.  The strip is both written and drawn by White.  This adventure has Johnny assisting a revolution in Cuba during the Castro regime.

Next up is actually a reprint of a comic strip White wrote and drew for the seventh (7th) issue of another famous fanzine, Alter Ego.  It features the characters Alter and Capt. Ego. that White created for the fanzine Alter Ego.  It features a young Earth boy by the name of Alter Albright and an humanoid alien named Capt. Ego from the planet Zircon.  This episode features the first appearance and origins of the two characters, as well as, the villain of the strip Tigris.  It ran for seven (7) pages.

Following this strip is Commando King in Russia, a six (6) page adventure of a new hero both written and drawn by White.  As you can tell by the title, the hero goes to Russia on a mission of some sort.  The mission is n0t revealed in this first installment.  Oh, Commando King is a “regular” American with no super powers, if you’re keeping track.

And last up are five (5) funny full page strips, written and drawn by White, entitled; Big House Buck # 13, about a crook that is captured and sent to prison.  It is definitely written with Whit’s tongue firming in his cheek, but it is pretty funny.

All in all, a pretty nice package put together, solely by one single fan, Bill J. White.  Unfortunatley White passed away a number of years ago and I wonder what happened to his “White House of Comics”, which he built to house his comics and fan artwork, out behind his house.  Any one know?

Hey, that’s it for this week, but please return next week for a new RETRO REVIEW, and God willing, and the crick don’t rise, I’ll be back in two weeks with yet another Fabulous Find.  Be seeing you …