Top 5 Comic Characters Who Should Be Thankful 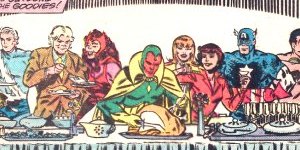 I Will Tell You #99:
Top 5 Comic Characters Who Should Be Thankful

Anyone who knows me personally, or has at least read some of my past columns over the years, has often heard me say, “You don’t have to be good if you’re lucky,” frequently amended with another statement, “You don’t have to be lucky if you’re blessed.” The first one is simply an acknowledgment that, while life often throws us an unexpected curve ball, something unexpected doesn’t necessarily mean something bad, and in fact such surprises can actually work in our favor. The latter statement is an addendum to the first, recognizing that such unanticipated good fortune just might be the result of some kind of deliberate intervention from a higher power. We have a name that we often attach to the positive things in life that are bestowed upon us, whether they are gains from our own efforts, or something which is granted us externally. We call them “blessings.”

This week, tradition calls for us to give thanks for our blessings, although many of us don’t wait for Thanksgiving to do so. At least the holiday serves as reminder for us to take a moment, step back, examine our lives, and recognize all that we truly have to be thankful for, which is usually far more than we might realize during a hectic or especially trying time. But there are those who never seem to take that moment; those whose lives are so crazy and demanding that there just isn’t time to step back and reflect. You might be thinking I speak of a certain class or demographic of people, but in fact I’m talking about a group of characters that most all of us can identify with, at least in part. Just who is this band of individuals I’m talking about, you ask?

Why, I will tell you. They’re comic characters.

Even the X-Men celebrate Thanksgiving. Sometimes.

That’s right, comic characters. Sounds outrageous, you might be thinking, but ask yourself: when’s the last time you saw Green Lantern seem all that grateful for being given a weapon that he can carry with him, practically unnoticed, at all times that allows him to create almost anything he can think of? Or for that matter, coming back from the dead? Or Nightcrawler, who also not only came back from the dead, but can disappear instantly whenever he finds himself in a bad or awkward situation? Or all of the other comic characters who maybe haven’t journeyed to or returned from the afterlife but still have plenty to be thankful for? What an ungrateful lot they all are.

I’m going to take a step towards addressing that. I’m going to list a number of characters who have heaping gobs of things to be thankful for, but have never really acknowledged them, at least openly. With that in mind, comic fans, I give you:

Top 5 Comic Characters Who Should Be Thankful 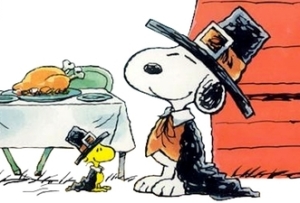 Snoopy and a REAL Thanksgiving feast. No, not Woodstock.

Yeah; Snoopy. I didn’t say comic book characters, did I? Although, BOOM! Studios has changed that with their wonderful Peanuts ongoing series. Snoopy is a dog, sure, but he lives a pretty autonomous life for a family pet. Short of his reliance on “that round-headed kid” to bring him his supper, his life is pretty much his own, and he’s able to largely come and go as he pleases, without getting rounded up by the dog-catcher and has apparently and successfully dodged vehicle traffic for decades.

He lives in a dwelling with a rooftop deck with what must be a spectacular view, based on the amount of time he spends there, which doubles as an open sleeping area and also serves as the location from which he writes his many mystery novels. His holiday decorating skills rival Martha Stewart’s as witnessed by winning first prize in a Christmastime lights and display contest, where he won money money money, and he’s been known to whip up quite the Thanksgiving feast at a moment’s notice.

So: he lives a life of complete freedom, in a nice house that’s lavishly decorated, and he can prepare his own meals if that blockhead Charlie Brown forgets that it’s suppertime. Snoopy has to be the most fortunate pet in comics.

Let’s face it: Aquaman has been one of comics’ most maligned characters since his creation in 1941, with more titles to his name than a restored 1957 Cadillac. His main power is that he talks to fish. He talks. To fish. And his costume has the same color scheme as something one might pick out at the Renaissance Festival.

And yet, he’s still around, nearly 75 years later, and guess what; he’s actually cool now. Short of a strong and lengthy run under Peter David during the 90s, the character never really had much of a cool factor until Geoff Johns, who long ago figured out that if you want something done right you have to do it yourself, took over the title when it was relaunched three years ago. There aren’t many franchises that get multiple tries over several decades to get it right.

Plus, he lost his hand at one point, but now it’s back. And that power to talk to fish? That’s actually a pretty, um, handy talent to have, if you’re trying to, say, persuade a school of hungry incoming piranhas to turn around go the other way.

So: his hand grew back, he can talk his way out of being eaten by a shark, and he’s survived decades of obscurity and insults to emerge as one of the better comics to come out of a company-wide reboot. If you don’t think that’s all worthy of being thankful for, then go ahead and stick your hand in that aquarium full of those mean looking fish with pointy teeth. 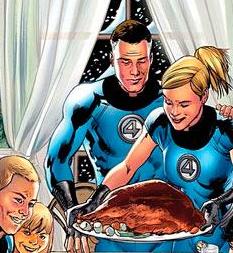 Reed Richards counts his blessings. Or should be.

Here’s a guy whose career started out by stealing government property and then jeopardizing the lives of his fiancée, her little brother, and his college roommate. This hubris causes one of them to transform into a misshapen monster who, without warning, had to give up the pretense of ever living a normal life again. And after all of the turmoil he caused and lives he turned upside down, this guy has the nerve to call himself Mister Fantastic.

Later on, he helped found a clandestine group with a number of other super-powered folks that later caused the very kind of extraterrestrial invasion that they were trying to prevent. And in the current storyline running through the Avengers books, he seems to be on the wrong side of a conflict that’s destined to split the superhero community in two, again.

And yet, despite all of his carelessness, deceit, and treachery, Reed Richards is well-regarded as a superhero and scientist, and is loved by the family that he himself risked the lives of on that very first mission. One of them even married him. Oh, and if Sue Richards really does look like Jessica Alba, then Reed is a very fortunate guy indeed.

So: after betraying his family and colleagues multiple times, Reed Richards ends up becoming a role model as a scientist, hero, and husband to one of the hottest superheroines in comics. If anyone should be thankful for their blessings, it’s the so-called Mister Fantastic himself, because if there is such a thing as karma, he’s got a buttload of it dangling over his head and he should count these blessings while he still can. 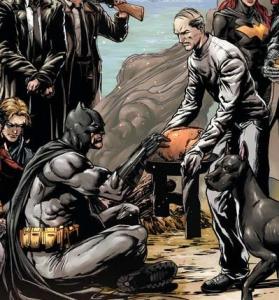 Alfred’s a great cook. Another blessing for Batman.

He witnessed his parents’ violent murder when he was just a kid. He’s probably got more enemies than any other superhero, and some of the deadliest ones at that. He lives and operates in a city that’s so rough that its residents look forward to a vacation on Apokolips.

If one doesn’t think Batman has a lot to be thankful for, then one just need look under the mask. Bruce Wayne is obscenely rich. His best friend is a father-figure, accomplice, medic, and his personal servant. He inherited his parents’ company, he lives in the family mansion, and he has the coolest toys ever stored in that cave underneath the house.

If there were ever a poster child for making the best of a bad situation, Batman’s picture would be on it. After enduring the worst possible tragedy that any child could imagine, everything pretty much turned up roses for him after that, and he’s made his city a safer place because of it.

If nothing else, his costume is one of the coolest ever, and he gets to beat up bad guys. There are a lot of people who think that Batman is one lucky guy. 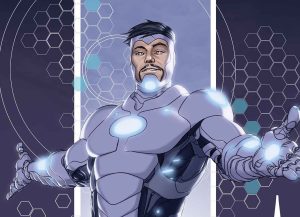 He’s had two serious bouts with alcoholism. Three, if you insist on including the non-events of Fear Itself. Four, if you want to count the recent events of AXIS, which hopefully will lose its façade of relevance just as quickly. Few are quick to label anyone who struggles with alcohol addiction in real life as fortunate, so Tony might not seem like the kind of guy who would have a lot to be thankful for.

Plus, like Reed Richards, Tony was also a founding member of the secret superhero club known as The Illuminati. He’s pretty much a jerk to just about everybody he knows. And he’s been an outright bad guy, don’t forget. Or, maybe you did forget The Crossing, where Tony was revealed to have been working for Kang for years, which led to the whole ill-conceived New Teen Tony thing. Oh, and he was pretty much a government pawn and the face of the side everyone was pulling against in Civil War.

And now, Tony is being vilified again, in the new Superior Iron Man comic, where the jerk-ometer now has the character clocking in at a solid eleven, where his already enormous ego is now larger than Wilson Fisk’s backside.

With all of that, just what in the world should Tony Stark be thankful for, you ask? That alcohol didn’t kill him? Of course. That he’s incredibly smart? Sure. That he’s been able to help save the world multiple times over? Why not.

But the one single thing that he should get down on his iron-plated knees and thank The Almighty for? That for all of his betrayals, letdowns, and holier-than-all attitude, his friends and enemies alike haven’t banded together to permanently kick his Extremis-laden patootie from here to the Negative Zone once and for all.

And while he’s down on his knees, he should pray that they never do.

We Should All Give Thanks

There are plenty of others characters who should be thankful, of course. The Joker, if nothing else, should give thanks on a nightly basis that he has an arch-foe who refuses to kill him. Daredevil survived being revealed as Matt Murdock, having his whole life nearly destroyed, and a really horrible costume in the early days. Batgirl literally walked away from a paralyzing injury that few in real life ever get to do.

Let’s not be like these characters. Let’s all recognize our blessings, and acknowledge them; not just on Thanksgiving, but every day, because the things we have in our lives to be thankful for are with us all the time, not just on one day a year.

For related reading, please check out:

I Will Tell You #89: Top 5 Reasons to be Thankful for Comics

I Will Tell You #93: Top 5 Luckiest Comic Book Characters