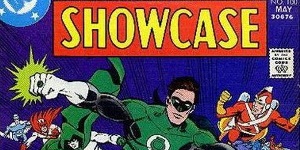 This week it’s time for another DC Comics RETRO REVIEW.  The comic in question is; Showcase # 100, cover dated May 1978.  It features a cover drawn by Joe Staton (pencils) and Dick Giordano (inks) and it proclaims the this “awesome Anniversary edition” showcases (yes, pun intended) “sixty (60) super-stars in a story it took one-hundred (100) issues to tell!”  Staton takes a page out of the George Perez playbook and includes quite a number of those characters on the cover. Here it is for your viewing pleasure: 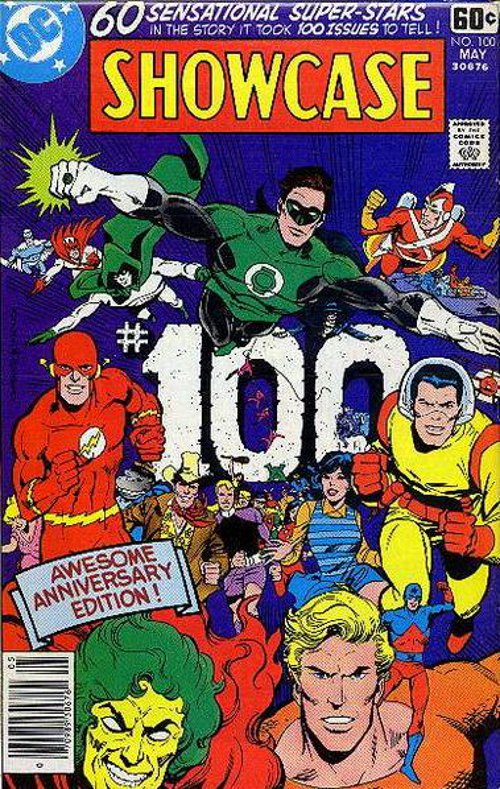 The story within is entitled; “There Shall Come A Gathering” and it is written by Paul Kupperberg and Paul Levitz and the artwork, both pencils and inks are provided by the above mentioned, Joe Staton.  Kupperberg and Levitz manage to craft a story that involves every character that had appeared in the first ninety-nine (99) issues of Showcase.  Not every character gets more than a cameo, but if you look closely, you’ll find them all worked into the story.

The book starts with members of the Justice League of America, surrounded by the Teen Titans, Adam Strange, Hawk & Dove, the Metal Men, as well as Lois Lane and Jimmy Olsen, plus a few others, including Rip Hunter, on the Justice League’s Orbiting satellite.  The Flash tells them all that “something is disrupting the fabric of time itself!” and we’re off on a grand adventure.

Adam Strange jumps in to explain that the Earth is being dragged out of it’s orbit.  Rip Hunter says he’ll take his team and check out the time stream.  The Metal Men and the Tenn Titans agree that they’ll handle any problems that will occur on Earth.Adam Strange, Green Lantern (Hal Jordan), The Flash and the Atom fly off into space to see if they can disrupt the energy that is being expended to pulled the Earth out of orbit.  The next three pages following the three teams efforts.

Then the scene switches to Lois Lane reporting on WGBS television, where she encounters Jack Ryder, aka the Creeper, and he soon finds a reason to switch into his alter-ego, and he and Lois and joined by the Challengers of the Unknown.  Meanwhile out in space, the heroes are met by Space Ranger and his little friend, the alien, Cryll.  But the Earth is still “hurtling through space at faster then light speeds.”

Meanwhile (yet again) the story switches back to the Earth, in the offices of O’Day & Simeon, aka Angel and the Ape!  Their office is crowded by other Showcase heroes, such as, the Inferior Five, Firehair, Bat Lash and even Binky and Willy & Windy!  Lash is hitting on Angel while Simeon drags in a couple of cavemen.  Here’s a look at the page, seventeen, I think:

From there we jump to under the sea, where Aquaman and the Sea Devils and joined forces, with a surprise appearance by Dolphin.  Then once again writers check in with two of their three original teams, the Metal Men & Teen Titans, who are battling a time tossed dinosaur, and out in space, where Adam Strange, Green Lantern, the Flash & Atom are joined by the Phantom Stranger and the Spectre.

Again the scene switches, back to the Challengers of the Unknown, the Creeper and Lois Lane, who have discovered a strange obelisk.  The Challengers manage to open it up only to have Lois Lane leap through just before the opening slams shut.  Meanwhile, yep, once again, we find Bat Lash, Tommy Tomorrow and Angel O’day discovering the same obelisk/monolith and they land on top of it.  The also manage to create an opening and it’s Angel O’Day who leaps through, as the opening seals again.

It seems it’s now up to Lois and Angel to save the day, battling various robots, but not just yet.  There is one more scene shift, back to space where the team of Spectre, Phantom Stranger, Green Lantern, Adam Strange, the Flash, the Atom and Space Ranger using raw strength and will power finally stop the Earth’s momentum and are able to return the planet to it’s original location and orbit.  And of course, Lois and Angel working together overcome the robots and disable the controls of the alien obelisk!

The comic ends with the Phantom Stranger saying; “fate may take but one of many roads, and this day, it has chosen the road of continued life for this small planet.”  And Angel O’Day has the final, less mysterious words; “this is the first time I’ve ever been so happy about breaking something!”  So the world shaking story leaves the reader with a smile.

A pretty nifty story by Kupperberg & Levitz with nice art by Joe Staton.  I definitely say; this issue is a keeper!  And hopefully you feel the same about my columns.  So please come back next week for a new Fabulous Find and again in two weeks for the next RETRO REVIEW.