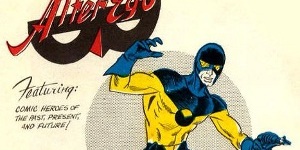 Yes, indeed, it’s time for a new Fabulous Find and this week I’ve uncovered a copy of the early sixties fanzine, Alter Ego # 5.  It was published sometime during the winter of 1962 – 1963, per the indicia on page two, but it likely went out to comic fans sometime in early 1963. This historic fanzine was created by local Detroit fan, Dr. Jerry Bails, Ph. D. and fan, Roy Thomas, who went on to write comics for Marvel Comics and then many other comic book companies throughout his career.  In fact Roy “the Boy” as Stan Lee nicknamed him still involved with comics and even published a modern version of Alter Ego.

Issue number five (#5) is the earliest issue I own, though I do have the last three issues in the original run, as well.  By the time this issue was published, Dr. Bails and Thomas had handed over the editorial duties to another fan, Ronn Foss.  So issue number five was Foss’s responsibility and he did a nice job with it!

The cover features Ronn’s character, the Eclipse, drawn by himself.  Take a look: 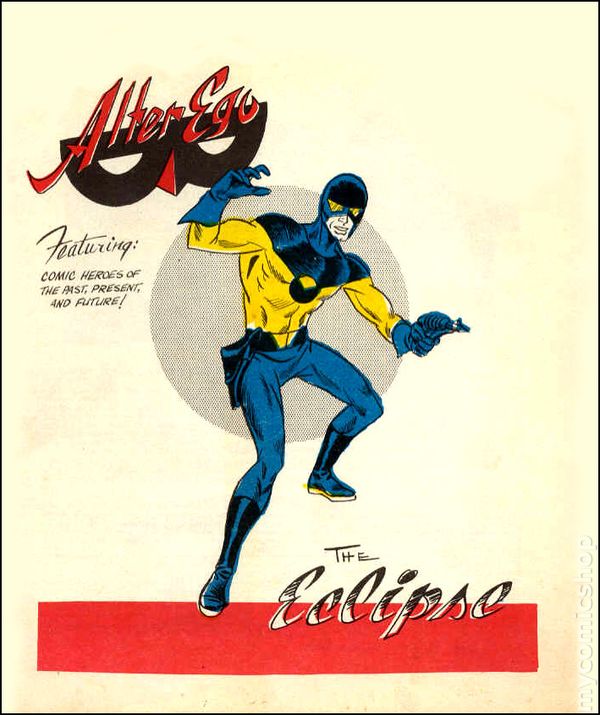 Page two contains the Table of Contents and indicia.  Page three features an editorial by Foss, as well as, a picture of Foss at his drawing table.  Next up is a two page article entitled; “The Mystery Of Fandom” written by Stan Woolston, that had originally run in a small west coast fanzine, Escape # 1.  This is followed by a three page article written by Ed Lahmann, entitled; “So – You Want To Collect Comics?”  Ed offers his opinion of specific comic books you should try to add to your collection.  Comics like, Superman # 2, Batman # 4, Whiz # 5 and Captain America # 1 through 10, etc.  Needless to say, these Golden Age books would have been much cheaper in 1963, but also rather hard to find for the average comic book collector starting out.

Next up is a three page article by Ron Haydock, entitled; “A Distant Thunder Of Rocket Men!”, which appears to be a part of an overall continuous column going under the name; “Serialously Speaking” covering the old movie serials.  Following this article is another, entitled; “The JLA – Over Crowded?” that is written by F. T Frost and illustrated by well known fan artist, Biljo White.  I’ve included the lead art for the article for you: 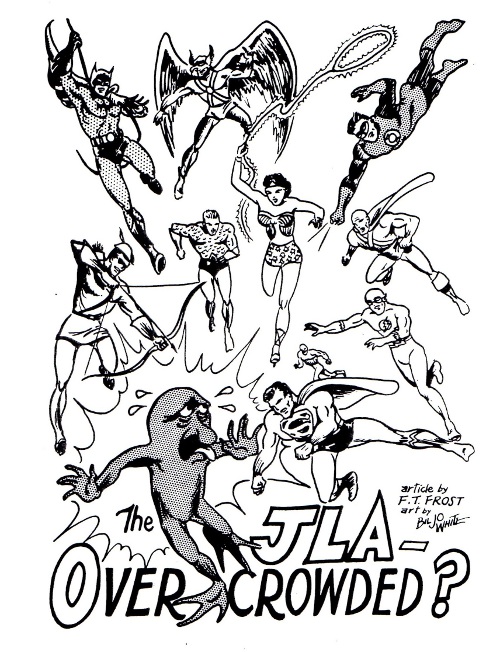 Biljo is most likely remembered for his own long running fanzine, Batmania.  Following this piece is a one page “pin-up” drawn by Roy Thomas, featuring his Superman parody; Superham and the Bestest League of America.  Take a peek: 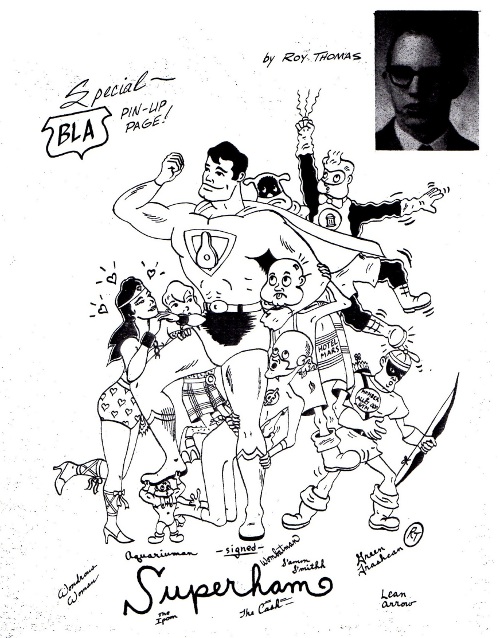 The lion share of the rest of the fanzine is made up of a ten page Eclipse comic strip drawn by editor, Ronn Foss and written by Drury Moroz. The Eclipse’s creation was inspired by DC Comics‘ Dr. Midnight character and Foss clearly states this here in Alter Ego # 5.  The character also appeared in various other sixties comic fanzines.  These episodes are worth searching out if you’re so inclined.  I have a few others, but by no means do I own them all, so I can’t list them all here, as I don’t know them all myself.

Next is a one page column entitled; “Portrait Of A Collector” and features Biljo White, as written by his wife, Ruthie White.  Biljo had started something like this in his own fanzine, Komix Illustrated, It was picked up here in Alter Ego and later appeared in the Rocket Blast and Comic Collector or better known as RBCC.

This is followed by a two page article entitled; “The Future Of Fandom – Unlimited!” written by Dr. Bails.  And finally the last six pages is made up of letters from readers, included this issues are letters of comment from professionals Carmine Infantino, Dorothy Woolfolk, John Broome and Gardner F. Fox.  As well as, well known fans, such as John McGeehan and Richard Kyle, as well as many more fans that I’m not familiar with.

One last thing of note is that the back cover has one last letter of comment, and also a Captain America illustration, by fan, Alan Weiss, dated December 1962.  Weiss went on to do professional comic book work, but did not stay in the field all that long. 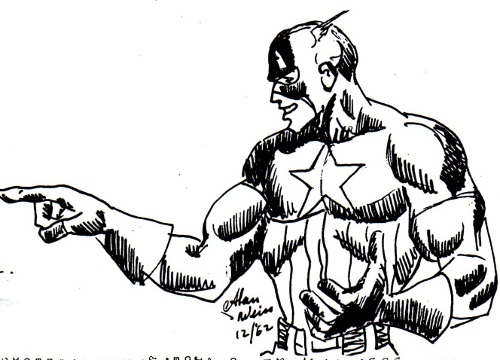 So that’s it for this week’s Fabulous Find, but be sure to come back next week for a new RETRO REVIEW, and again in two weeks, for another Fabulous Find.  Stay warm, my friends and … be seeing you.