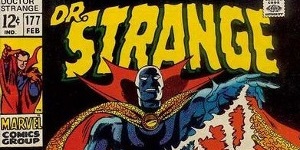 Greetings and salutations fellow comic book fans.  It’s time for another RETRO REVIEW and this week it’s time to once again shine the spotlight on Marvel Comics.  I’ve pulled out a book that features one of my all time favorite covers. And what is that comic?  Glad you asked, otherwise this might have been my all time shortest RETRO REVIEW.  The comic in question is … Dr. Strange # 177, cover dated February 1969.

Let’s take a look, shall we: 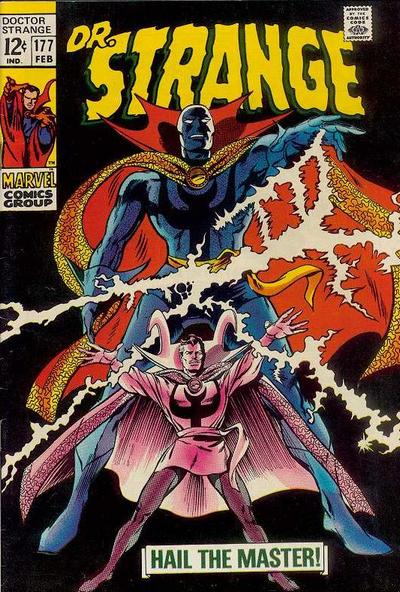 I know some people, and maybe most people, did not care for Doctor Strange’s superhero makeover that took place in this comic.  In fact, the makeover only lasted seven issues (# 177 through 183), but I really liked it for some reason.  I’ve read online that people were confused and wondered why the Silver Surfer was wearing Doctor Strange’s colors.  I think this stems from the tight masked over Strange’s face, which made him look similar to the Surfer in some ways.  In essence, he had no face in this costume!

But all that aside, the Doctor Strange title had just been taken over by writer, Roy Thomas.  And the title of the book had just been changed from Doctor Strange to Dr. Strange just the issue before (#176).  Also, since artist, Steve Ditko, left Doctor Strange and Marvel Comics, Stan Lee had tried various artists on the book, but finally settled on Gene Colan,who settled in and made the book his own with the addition of inker, Tom Palmer.  Oh, by the way the cover above is drawn by Gene Colan and inked by Tom Palmer.

Issue # 177 picks up right where the previous issue had left off, with Admodeus and the Sons of Satannish, banishing Dr. Strange and his love, Clea, into a hostile dimension.  The cover says; “Hail The Master!”, but the actual title of the story within is; “The Cult And The Curse”.  Doc is without his mystic Eye of Agamotto, as well as, his cloak of levitation and the Book of the Vishanti is in the hands of the Sone of Satannish.  All looks lost, as Doc and Clea fight against the alien dimension’s efforts to kill them.

But then Dr. Strange reveals that he actually is in possession of the Eye of Agamotto and that Admodeus only has the amulet, but the Eye is not within it!  Using the Eye, Dr. Strange is able to regain his cloak of levitation, as well.  No armed with his sorceress tools, he can win against the dangers of the alien dimension and return home.

It’s at this moment that Dr. Strange tries to return Clea and himself to their correct dimension, but for some reason, with Admodeus assuming his true form, Stephen is unable to return to Earth, so he assumes another form, as apparently, “many can be the forms and faces of Dr. Strange!”  Take a look at Colan and Palmer’s three panel change sequence:

Which leads to a full page dynamic drawing by the same artists, revealing the new look for Dr. Strange: 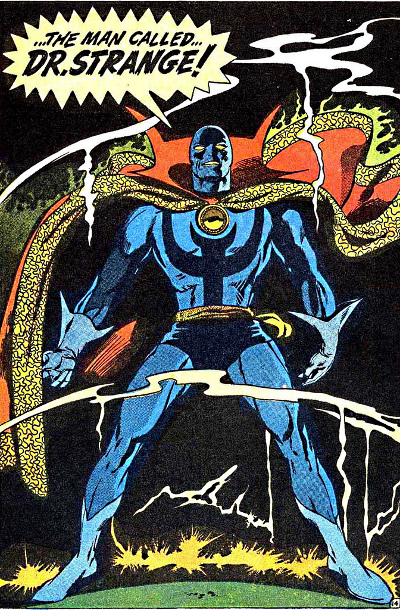 At least Roy Thomas came up with a pretty cool and different reason for the change in costume.  Anyway, with the change, Clea and Dr. Strange can return home and then Strange tracks Admodeus to the Ancient One’s sanctuary, where they do battle.  Eventually Admodeus sucomes to a weak heart, but not before releasing the spell of Fire and Ice, which summons Ymir, the Frost Giant and the fiery demon, Surtur (from the Thor comic books).

The comic ends here, but sets up the conclusion in the next issue, Dr. Strange # 178, and then carrying on into Avengers # 61.  Obviously, Thomas was trying to get Dr. Strange some attention and hopefully more readers, giving him a more superhero look and then crossing over into the Avengers comic.

I for one was definitely on board, but as I said earlier, most were not, and soon Dr. Strange reverted back to his more mystic togs.  But this is one of my favorite comics and I also liked the fact that issue # 178, and Avengers # 61, co-starred another lessor known Marvel hero, the Black Knight.

That’s it for this RETRO REVIEW, but be sure to come back next week for a new Fabulous Find and I’ll have another new RETRO REVIEW in two weeks.  Be seeing you …