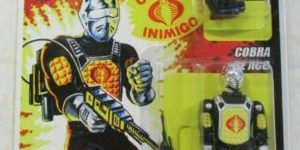 Welcome back to Consigned, Cool, & Collected, where we’re turning our eye to a collection of G. I. Joe figures that recently came into our showroom. Specifically, we’re looking at Estrala Toy Company’s best known addition to the line: Cobra De Aco!

Despite the aggressively American nature of the 1982 G. I. Joe: A Real American Hero line, Hasbro knew they had a potential international hit on their hands. To capitalize on that possibility, they licensed the molds and characters out to India’s Funskool (as “G. I. Joe: A Real International Hero”), Britain’s Palitoy (as “Action Force), and Brazil’s Estrela Toy Company (as “Commandos Em Açao”) among others to spread the toys globally.

Due to differences in cultural mores, not to mention language barriers, the international versions of Joes could differ greatly from their original counterparts. A shining example of this phenomenon is real-life-wrestler-turned-cartoon-Joe Sgt. Slaughter being renamed “Sgt. Smasher” in countries where the WWE wasn’t well known and “slaughter” is too negative a word to use in the name of a good guy.

Overseas licensees would even go so far as to create their own original characters using remixed and repainted bodies with new names and backstories. The ones that have caught on the most, or at least lent themselves well to the globetrotting adventures of the American Joes, are the bad guys. Action Force’s Red Shadows received a convention exclusive box set in 2010 and have seen some prominent use in American G. I. Joe comics in the last 20 years, but arguably the signature international creation is Estrela’s Cobra De Aco (“Steel Cobra” in English).

In 1985-6, Estrela Toy Company created their very own Cobra member from the body of first wave Joe Flash and the head of the original Snake-Eyes figure, with the former repainted to have a striking black/yellow/silver color scheme and the latter vac-metalized like Destro.

This gave him a very striking look that captured the imagination of American fans when they discovered him in the age of the internet. The original quickly became a sought-after figure in the fan community and the character a favorite subject of customizers, with at least 25 examples submitted to JoeCustoms.com’s community. This lead fairly directly to his induction into American G. I. Joe canon in 2011 with his inclusion in the Mission: Brazil II convention boxed set. Just like the original, this new version was a vac-metalized Snake-Eyes head on a repainted Sgt. Flash body.

What looks to untrained American eyes to be a foreign bootleg G. I. Joe is, in reality, a legendary and highly sought after official release. Stuff like this is why it never hurts to let experts, like us here at Back to the Past, have a look at those toys you just inherited before putting them up on Facebook Marketplace. And if you’re already in the know, stick around for more fun items that are Consigned, Cool, & Collected.

EDIT: Between completion of this piece and publication, closer inspection revealed that the specimen we had was most likely a top-shelf reproduction by Black Major Customs and was listed accordingly. That said, the information about Cobra De Aco above is still accurate, it just turns out we didn’t have an original. That’s what I get for writing a post based on a collection that hasn’t been fully processed yet.