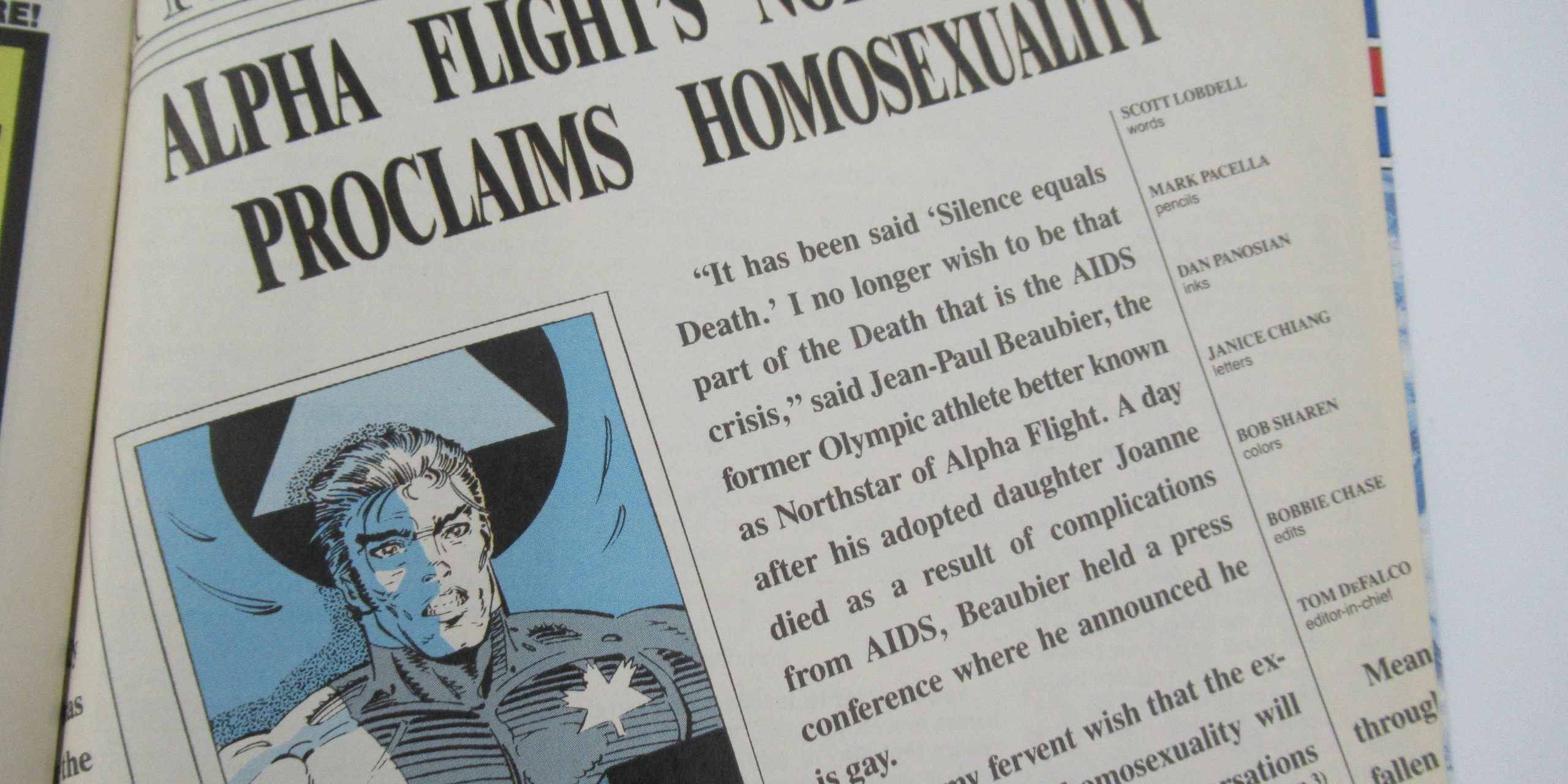 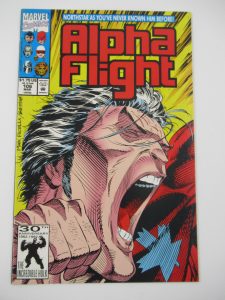 “Northstar As You’ve Never Known Him Before” unless you can pick up on subtext.

It’s the last week of Pride Month and we feel like celebrating some queer comics history. Today, we’re talking about a super-key issue from a historical (if not monetary) standpoint. That issue is Alpha Flight #106, the first time a mainstream comic hero “came out” as gay! Specifically, it was Alpha Flight founder and sometime X-Men member Northstar

Ever since Superman captured crooked congressmen in Action Comics #1 and Captain America punched out Hitler, superheroes have sent political messages. Due to the nature of creative work, many of these messages tended to be socially progressive. The 60s and 70s featured stories tackling drug use, racial inequality, women’s liberation, and the complexities of the Vietnam War. In the 80s, a number of creators wanted to tackle the emerging realities of “Homosexual Liberation”. Two authorities stood in their way.

The first was the Comics Code Authority, though they ultimately don’t play a very active role in this story. No, more active was Marvel Editor-in-Chief Jim Shooter. Shooter purportedly had a policy against the portrayal of openly gay characters. This prevented Alpha Flight co-creator John Byrne from revealing that team member Northstar was gay when the series launched in 1983. Since Marvel is historically the more boldly progressive of the Big Two, DC followed suit with subtext and hints but no openness. That status quo outlasted Shooter’s tenure, not ending until 1992.

Alpha Flight #106 arrived in comic shops on January 14, 1992. That is three months after Freddie Mercury’s death from AIDS. That is two years after Psycho star Anthony Perkins found out he was HIV+ from a supermarket tabloid, his results having been leaked by a nurse before being shared with him. Point being, the AIDS crisis was still a massive problem in the queer community circa January 1992. It was still seen by many as a divine judgement on gays and drug users.The disease added a massive extra stigma to being a man attracted to men – it wasn’t just “unnatural” anymore, it made you a modern leper.

Alpha Flight #106’s story kicks off with team members Northstar and Sasquatch battling Mr. Hyde on the streets of Toronto. Northstar is tossed down and alley and pinballs off of some trash cans…prompting a choked cough from one of them. In it, he discovers a baby girl who is running a terrible fever. He rescues the infant and uses his fantastic speed to rush her to the hospital, Mr. Hyde all but forgotten. He is told that the little girl, despite being only months old, is suffering from full blown AIDS – she must have been infected with HIV in utero.

Northstar vs. An Infanticidal Superhero 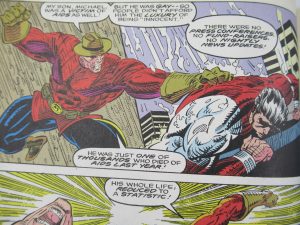 Northstar adopts the baby girl and vows to do everything he can for her. Being as he’s a member of Canada’s answer to The Avengers and an ex-Olympian, this attracts a ton of attention. News coverage highlights the girl’s plight and her new father’s selflessness. Sympathy pours in from all over Canada. And one fellow superhero gets mad.

Major Mapleleaf, Canada’s World War II answer to Captain America, attacks the girl’s hospital room. He fully intends to kill this baby with bare hands. Northstar tackles the Major and flies away from the hospital, confused and angry. Why does one of Canada’s greatest heroes want to kill a baby? To punish Northstar and the rest of Canada by proxy.

See, Major Mapleleaf left government service decades prior to raise his son, Michael. And Michael grew into a fine young man – a gay one. Michael died of AIDS related complications a year prior and there was not one thing that his father, the famous and beloved superhero, could do to ease his suffering. His son’s whole life was reduced to a statistic, and no one cared because he was gay. There was no public sympathy. No nightly updates. All because he “brought it on himself”.

Now here comes a member of Alpha Flight and his telegenic baby girl, holding press conferences and getting nightly news coverage. To the public, she’s an innocent and this is pure tragedy. Well, his son was no more guilty than that baby. And it’s just not fair anyone thinks otherwise.

While he’s sympathetic to Major Mapleleaf’s grief, Northstar does not take kindly to being lectured on the plight of gay men. Because, not that Major Mapleleaf is entitled to know, Northstar is gay. The Major is, at first, even more furious. If Northstar had been out this whole time, maybe things would have been different for his son! But Northstar quickly corrects him that neither he nor Michael are responsible for what happened to the Major’s son. But Major Mapleleaf is right about one thing – it’s time to start talking with honesty and compassion about the victims of AIDS. Both the ones who die, and those they leave behind. 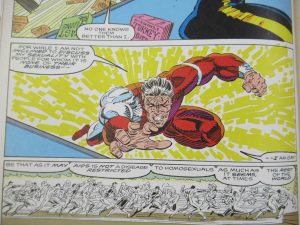 Northstar says that he’s gay, the first comic book superhero to do so.

The story ends with Major Mapleleaf and Northstar comforting each other as the baby girl succumbs to her illness. The final page is a newspaper clipping chronicling Northstar’s public coming out in the wake of his daughter’s death. Both in the Marvel Universe and the real world, he is the first mainstream superhero to do so. As recent Pride Month anthologies from both Marvel and DC demonstrate, he was far from the last.

A Story That Has Aged Shockingly Well

Really, the only things about this story that haven’t aged well are the parts that history was rendered obsolete. Firstly, and least importantly, is the art. It’s very 90s, with all the beefy design excesses and strange poses that entails. Secondly, and more importantly, the message of the story is being rendered more and more obsolete each year! Thanks to the wonders of Comic Book Time, Major Mapleleaf’s son would very likely survive his diagnosis today – HIV is no longer a death sentence, it’s a chronic condition that can be managed with medication. And that is amazing.

But the core of this story still stands. It was a story urging acceptance and compassion for gay people in general and AIDS victims in particular published not long after the White House’s official stance on AIDS was “it’s kinda funny, actually“. It’s easy to stand here in 2022 and pick apart how it’s not perfect, not the ideal version of representation. But when is the first ever example the ideal?

While it’s not the most valuable key issue out there, being a direct market issue of an X-Men spin-off in the early 90s, it’s a great read. Comic book history lurks in the most surprising places, and it’s our job to help our consignors find it! Alpha Flight #106 comes to auction this weekend with a bunch of other later AF issues and is definitely worthy of a spot in your collection. Keep your eyes right here on the blog for more history and hot takes from the world of collectibles.

And if you’re looking for a quote or comment on this or any other collectibles-related topic, feel free to comment below or hit us up on socials @b2pcollect!