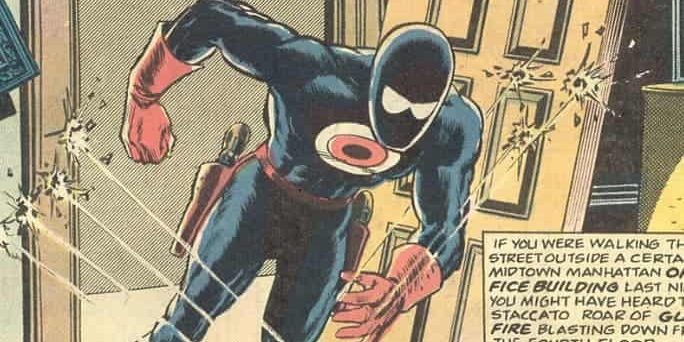 Welcome back to My Hero! Each week, Back to the Past uses this column to tell you why the obscure characters from our custom action figure collection are great! Years ago, we purchased the life’s work of an artist and comic fan whose chosen medium was granting forgotten comic characters the action figure immortality denied to them by major toymakers. We’re still sorting through it all, and we’re making new finds every week! This week’s find, who will soon be available on eBay, is John Targitt AKA Man-Stalker!

He’s the grand finale to our month-long series on the heroes of indie or small-press publishers. Targitt’s publisher, Atlas/Seaboard Comics, practically invented the modern indie publisher model, in fact. They just, y’know, didn’t do it very successfully. 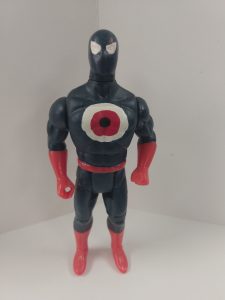 The Man-Stalker as he appears in our custom action figure collection.

What is Atlas/Seaboard Comics?

Plenty of comic fans are familiar with Atlas Comics! It’s the name that the future Marvel Comics used in the 50s. However, it is ALSO the name of a company created in 1974 as a “Take That!” to Marvel. Seaboard Publication was the parent company to the second version, leading to the “Atlas/Seaboard” appellation.

See, Marvel Comics was sold by its founder Martin Goodman in 1968. He left the company in 1972 and his son Chip was let go soon afterward. This made Martin Goodman very angry. See, he’d made a handshake deal with the company’s new owners that Chip would take over his position as publisher once he retired. Since handshake deals are as good as the paper they’re printed on, that didn’t happen and they went with Stan Lee instead.

Martin Goodman once again founded a comic company, this time with the goal of challenging Marvel and DC’s market dominance. Was it vengeance? A desire to be in control again? Recollections vary. To Goodman’s credit, he used the opportunity to pioneer creator rights. He offered some of the industry’s highest rates, allowed artists to retain original artwork, and granted ownership stakes in original characters. With Stan Lee’s brother Larry as Editor-in-Chief and Chip in place as publisher, Atlas Comics 2.0 made a strong initial showing.They put out a total of 23 regular comics and five black-and-white comic magazines in their day.

Unfortunately, the longest of those titles lasted four issues. Many lasted just one. Atlas/Seaboard Comics folded in 1975, after only a year or so in operation.

Arriving on newstands with a cover date of March 1975, Targitt #1 introduced readers to FBI Special Agent John Targitt. In the first couple pages, the mob inadvertantly kills Targitt’s wife and daughter. Their target is a mob boss the FBI are transporting on a commercial flight. The Targitt family are collateral damage.

Targitt embarked on a personal investigation to find the assassins who set up the bomb. He is successful, and what’s more discovers a drug shipment their boss is bringing into the country. Targitt torches the boat, destroying the shipment and sending a powerful message. It’s a strong issue that advances Atlas/Seaboard into the “crime comics” genre.It’s veryDirty Harry. 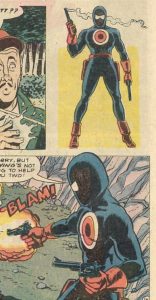 John Targitt…Man-Stalker #2 hit stands with a June 1975 cover date. It opens with Targitt resolving to quit the FBI over their attempts to sideline him in the previous issue. His boss beats him to the punch and fires him, but soon arranges a clandestine meeting. He believes that he needs a deniable operative, someone who can act outside the law, to take on this mob boss. Giving Targitt his guns back and an identity-concealing costume, Targitt spends the rest of the issue using hot lead to show the mob what’s what. It’s very Punisher, although that Marvel anti-hero hadn’t appeared in a solo story by the time this ish was released. Just another way Atlas/Seaboard was ahead of their time, if only by a little bit.

The third and final issue saw the mob get one over on Targitt, damaging his costume and causing him to lose his guns. Luckily, his contact Hunch has developed a new costume for him: it looks the same, but it’s much harder to damage AND has motors in it that enhance the wearer’s strength. With this new suit, Targitt is able to take down the leading gangsters without much bloodshed. At the issue’s end, he officially dubs himself “The Man-Stalker” just in time to never appear again.

The Atlas/Seaboard Style: Re-Piloting Every Issue

Many Atlas/Seaboard titles drastically change plots, circumstances, and characters from issue to issue. One of the most infamous examples of this is in their series Scorpion. The first two issues are inter-war pulp action, the third a modern day superhero story. Their hero The Phoenix renamed himself The Protector and got news powers in his fourth and final issue. Targitt was no exception, starting a hard-boiled crime series before moving into gun-toting anti-heroism and ending up a traditional superhero.

Except it weirdly works in Targitt’s case. His three issues work better than most Atlas/Seaboard titles as a mini-series, charting his evolution from grieving FBI agent to superhero. While somewhat abrupt, the successive changes work pretty well as character evolution. The company’s failure actually HELPED here, preventing publisher Chip Goodman and editor-in-chief Larry Leiber (Stan Lee’s brother) from monkeying with it again.

If you want any Atlas/Seaboard heroes on your shelf, you’ll need our Custom Action Figure collection. And if you’ve got collection like our custom figures, be it more customs, original art, garage kits, convention sketches, whatever – and are looking to sell it, get in touch! or if you want a comment or quote on something we’ve written about, we’re always available! We can be found dang near everywhere as @b2pcollect.