Who is Rainbow Boy? 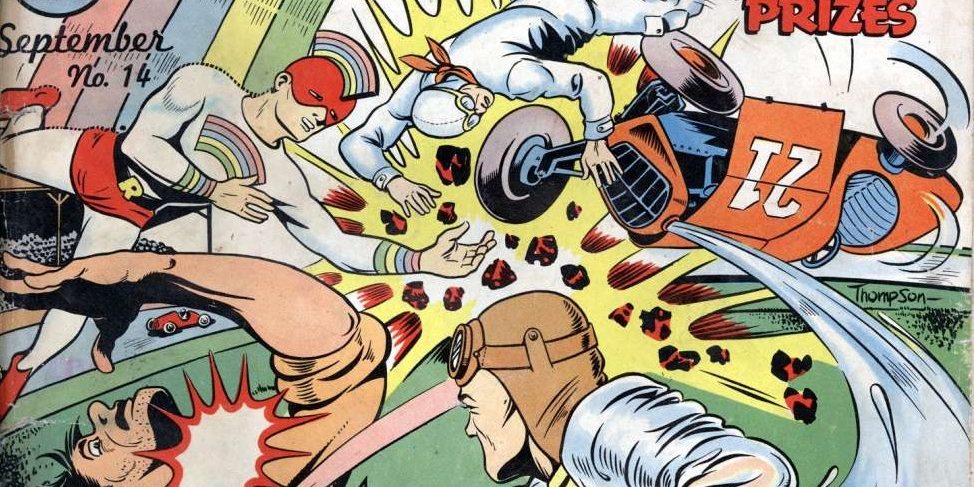 Welcome back to My Hero! Each week, Back to the Past uses this column to tell you why the obscure characters from our custom action figure collection are great! Years ago, we purchased the life’s work of an artist and comic fan whose chosen medium was granting forgotten comic characters the action figure immortality denied to them by major toymakers. We’re still sorting through it all, and we’re making new finds every week! This week’s find, who will soon be available on ebay, is Rainbow Boy!

Rainbow Boy as he appears in Custom Action Figure Collection!

Reg’lar Fellers Heroic Comics #14 arrived at newsstands across America in Summer 1942. It featured the debut of a new superhero feature, spinning out of the series’ established headliner Hydroman (more on him next week). Basically, from out of nowhere a rainbow appeared through Hydroman’s water trail and coalesced into the form of a teen boy in a “pute white costume” (and, y’know, rainbow mohawk). The young man introduced himself as Rainbow Boy, a fellow crimefighter who hoped to work with Hydroman. This turned into a double-sized team-up story, with Rainbow Boy’s true solo feature debuting the following month.

Jack Walton is the captain of his high school football team. He’s a radio pundit on the Wizard Kid Radio Program. And he’s the costumed crimebuster known as Rainbow Boy! Jack has the ability to fly at the speed of light and leave a rainbow trail in his wake. That rainbow trail is, apparently, a physical object that he can use to capture crooks. He can only do this when the sun is shining on him, or with the help of a solar battery (somehow). How did he gain these powers? Never explained!

With issue number sixteen, Heroic Comics dropped its association with Reg’lar Fellers (a popular comic strip) and began focusing on tales of military daring do. Rainbow Boy’s feature would hang on through issue twenty before being dropped like all of the title’s superhero features. 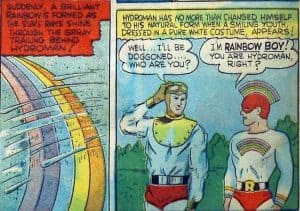 Rainbow Boy literally just shows up in his 1st appearance.

Rainbow Boy is, like many Golden Age characters, in the public domain. He’s made a few appearances in various Project: Superpowers titles, albeit as a crowd filler in scenes where teen heroes gather. Due to being male, he hasn’t up to this point joined the Femforce universe. The character’s biggest modern break has come from books about comics. Rainbow Boy is one of the many, many superhero characters featured in Quirk Books’ League of Regrettable Heroes hardcover (which is particularly hard on the Golden Age, albeit with good reason). His adventures are reprinted in Super Weird Heroes Volume One by IDW Publishing, alongside a whole bunch of other public domain oddities.

It seems strange to us that no envelope-pushing indie comics publisher has picked up the character, even ironically. While created long before the LGTBQIA community was associated with rainbows, most jokes at the character’s expense around the internet center around the association. Like many Golden Age characters, Rainbow Boy’s characterization is a bit of a tabula rasa, asking for a modern interpretation! Ah well, perhaps he’s too on the nose.

No matter why you like Rainbow Boy, no one’s ever made an action figure of him. Or, more accurately, no toy company’s made a mass produced figure of him. Our mad customizer faithfully adapted him into plastic, and now his work is available to you in our Custom Action Figure Collection. And if you’ve got collection like our custom figures, be it more customs, original art, garage kits, convention sketches, whatever – and are looking to sell it, get in touch!