What is Galactus’ First Appearance? 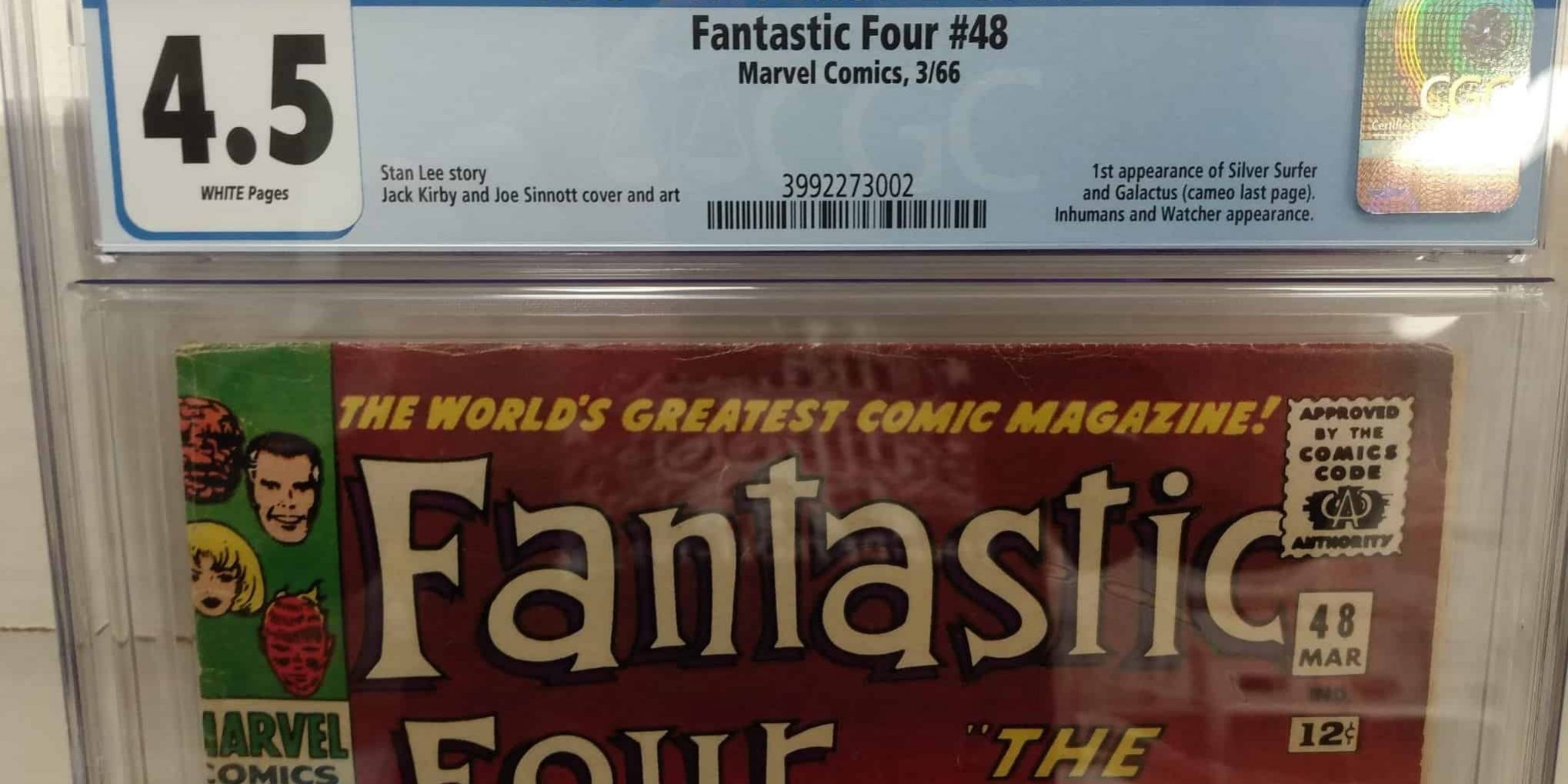 Welcome back to Consigned, Cool, & Collected! Each week, Back to the Past delves into the history and individual significance of the cool collectible stuff we handle every day. This week, we continue to highlight CGC graded comics coming to auction the weekend of May 21st by looking at Fantastic Four #48. What’s so special about that issue? Well, it is the 1st appearance of The Silver Surfer and his master Galactus! 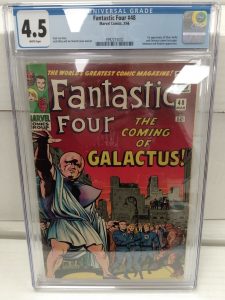 What Is The Cosmic Side of Marvel?

Since its earliest days, Marvel has been pitting its heroes against alien invasions. The Fantastic Four battled shapeshifting Skrulls in their second appearance, Thor debuted battling The Stone Men from Saturn, Professor X lost the use of his legs battling an alien, etc, etc. So alien invasions have been de rigueur in the Marvel Universe for a long time.

But that’s not really what fans think of when they think “cosmic Marvel”. They think godlike cosmic powers. They think Infinity Stones. They think existential battles that make a simple invasion look like nothing. They think Avengers: Infinity War, not The Avengers (2012). And that’s what Fantastic Four #48 through #50 introduced.

The Coming of Galactus 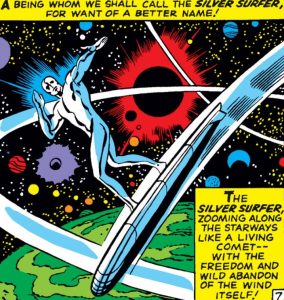 The main plot of the issue kicks off when the Skrulls, the Fantastic Four’s perennial alien imperialist foes, spy the Silver Surfer flying through their galaxy. Since the Surfer’s master, Galactus, is never far behind, they flee and attempt to camouflage their homeworld lest he find it. This sets the tone for what’s to come, introducing a new threat and showing the F4’s most dastardly extraterrestrial foes are terrified of it.

Back on Earth, strange atmospheric disturbances are panicking the people of New York. The Fantastic Four investigate and discover their cause to be The Watcher. Initially introduced in Fantastic Four #13, The Watcher is from a highly advanced race of aliens who…watch younger races and record their history. They’re sworn never to interfere. So the fact that Earth’s Watcher is here, directly interfering? That’s a big deal.

He is attempting to hide the Earth from the Silver Surfer. He fails, resulting in the Silver Surfer making landfall at the Baxter Building and sending a message into space. The F4 rush to their HQ’s roof and knock the Surfer off, but it is much too late. Galactus arrives, promising to drain Earth of its elemental life.

Both of the Fantastic Four’s co-plotters, Stan Lee and Jack Kirby, claimed credit for devising Galactus. One thing they both agreed on about that creation is that the idea was for the Fantastic Four to fight god. While previous alien races had been very human like in terms of motivations and mortality, Galactus and The Silver Surfer were different. Their goals were beyond the morality of mortal beings. They were said to be ancient, a part of “cosmic history”. And no physical threat mounted by the Fantastic Four could slow them down for more than a few minutes. 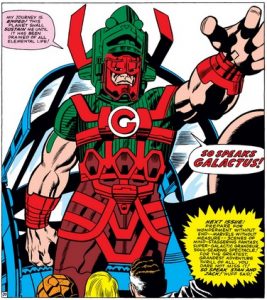 Kirby would tackle similar themes ten years later with his solo Marvel title The Eternals. That series would boast an entire race of cosmic demi-gods who could go toe-to-toe with the Silver Surfer, plus a race of Space Gods in scale with Galactus. Jim Starlin’s Thanos mythology would be combined with Kirby’s Eternals, extending the importance of The Eternals and their Celestial masters. Conceptual beings, like Master Order and Death herself, also were prominent creations of this period. While heroes like Captain America and Iron Man spent most of their time battling terrestrial threats, gods were out there roaming the spaceways.

A Key Issue By Any Measure

Fantastic Four #48 introduces two of the most prominent characters in the F4’s mythos. Heck, in the Marvel Universe in general! The Silver Surfer in particular provided the lead-in to the original Infinity Gauntlet crossover, with Thanos returning from the dead in the pages of his longest running solo title. Solely from a first appearance standpoint, this is a key issue.

From a conceptual standpoint, this is a super key issue. It introduced to the Marvel Universe the concept of “Space Gods”, a concept which has had a broad impact on every facet of Marvel’s creative output. A fairly straight line can be drawn from the characters and concepts that debut in this issue to various Marvel movies and TV shows.

And that’s the fun of key issues! It’s rarely just about the character that makes their first appearance. After all, there are a lot of one-appearance wonders out there. No, the truly key issues introduce new ideas. They expand the fictional universe beyond the simple addition of a few new characters, introducing concepts that will shape various stories to this day. And if ID’ing such issues isn’t your strong suit, letting experts like Back to the Past bring your collection to market is a wise idea. Those who just want to read about cool collectible stuff will want to be come back here every Monday morning for a new installment of Consigned, Cool, & Collected!