Who is the Black Hood in Archie Comics? 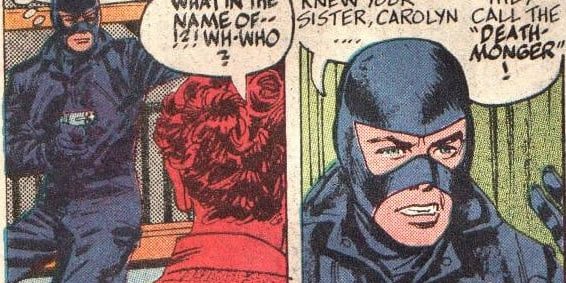 Welcome back to My Hero! Each week, Back to the Past uses this column to tell you why the obscure characters from our custom action figure collection are great! Years ago, we purchased the life’s work of an artist and comic fan whose chosen medium was granting forgotten comic characters the action figure immortality denied to them by major toymakers. We’re still sorting through it all, and we’re making new finds every week! This week’s find, who will soon be available on ebay, is The Black Hood! Particularly, the second character to use the name. 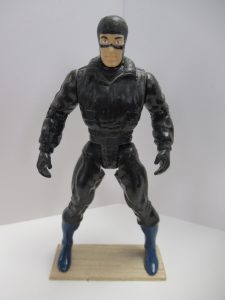 The second Black Hood as he appears in our custom figure collection.

Viewers of The CW’s Riverdale know The Black Hood as one of the nefarious killers to menace the small town. That’s not really the comic book version’s deal. The original Black Hood debuted in the pages of Top Notch Comics #9 in 1940. He would go on to be one Archie Comics’ more successful Golden Age heroes, netting both his own self-titled comic and a short-lived radio show. He was one of the heroes brought back in the 1960s to found the Mighty Crusaders in the high camp 60s adventures of Archie’s superheroes.

As the Silver Age gave way to the Bronze Age, writer/artist Gray Morrow pitched a drastic revamp of The Black Hood. Dovetailing off the family history the identity was given in the Silver Age, a new member of the Burland family would dawn the hood. Kip Burland, nephew of the Mighty Crusader, wore a considerably less flashy costume and fought mundane murderers and gangsters. He traded his uncle’s flying robot horse for a motorcycle, and brought his own custom pepperbox pistol to the identity. Morrow completed the character’s initial story, plotting second with then up-and-coming artist Neal Adams.

Odd Man Out in the Mighty Crusaders 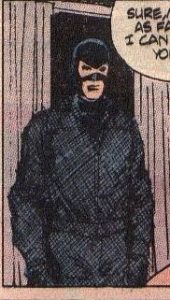 The Black Hood as drawn by Neal Adams.

The strip was a little ahead of its time, especially for the squeaky clean Archie Comics. These Black Hood stories were completed in the early 1970s but didn’t see print until Archie’s Super Hero Special Digest #2 hit stands in 1979. Which worked in their favor, as Neal Adams was a favorite among comic fans by that time.

This lead to Kip being a founding member of the revived Mighty Crusaders when the team was revived in 1983. Paired up with Archie Comics’ Golden and Silver Age champions, the gritty urban vigilante came off a bit out-of-place. Neverthless, he earned his own short-lived solo series that same year. In Mighty Crusaders #11, young Kip adopted his uncle’s black and yellow costume after the elder Black Hood’s murder. The series ended with #13, but it is safe to assume that Kip remained the Black Hood for all future cameos until he was explicitly killed off in 2015’s Black Hood #1.

No Love From Remco

Only four heroes got toys in Remco’s short-lived Mighty Crusaders toyline. Owing to his costume’s lack of colorful detail, Kip Burland’s Black Hood was not one of them. Back to the Past’s Custom Action Figure Collection is the best way for fans of Archie’s classic superheroes to put the whole lineup on their shelf! In the past, we sold Kip’s uncle on eBay. Maybe that collector will pick-up Kip, or maybe some enterprising Neal Adams fan wants to put him up alongside Green Arrow and Havok.

And if you’ve got collection like our custom figures, be it more customs, original art, garage kits, convention sketches, whatever – and are looking to sell it, get in touch!