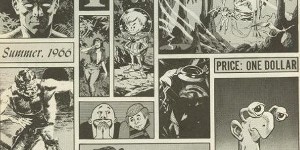 Welcome back for another  Fabulous Find!  This week I’ve pulled out the first five (5) issues of the fanzine, Witzend!  The fanzine was the brainchild of artist Wallace (Wally) Wood.  The first issue was dated the Summer of 1966 and issue five was dated October of 1968.  As Wood stated on his “Statement of NO Policy” page; i.e. his editorial page, “Our only aim is to make this magazine the best, most entertaining one we possibly can.”  Let’s take a look and see if he, and his contributors, succeeded.

Here is the cover to that very first issue, from the Summer of 1966.  As you can see, it sold for one dollar, a buck, but back in 1966, wasn’t cheap for young comic book buyers.  The cover consists of small preview pics of the contents of the magazine, rather than one large cover illustration. 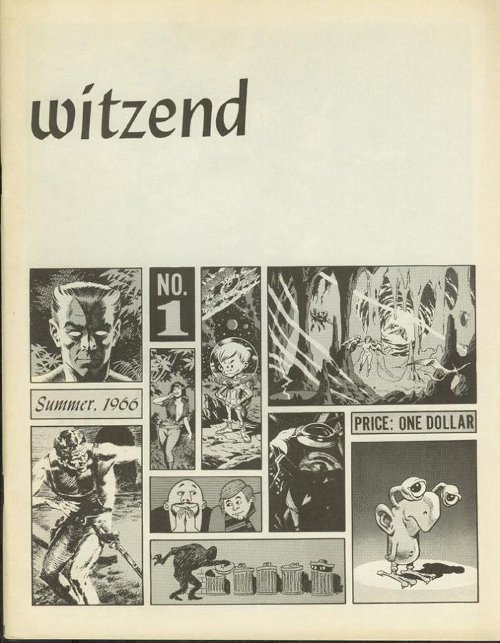 And what’s in this issue?  After Wood’s No Policy/editorial page the reader gets a seven (7) page Al Williamson story entitled; “Savage World!”.  It is a science fiction tale where an atomic bomb test opens up a passage to an underground world.  Next up is two (2) pages of Wood telling the reader what to expect in future issues, with spot illos by Steve Ditko and Jack Kirby!

Next up is a one page story written and illustrated by Ralph Reese.  Then follows a four (4) page story entitled; “Sinner” written and drawn by Archie Goodwin.  Then a page of poetry, believe it or not, with a nice illustration by Angelo Torres, who was a friend of Al Williamson. The center two (2) pages sees Wood giving credit and acknowledging the contributors.  It also sports a Wood illustration of his character, Bucky Ruckus!

After that, we get another seven (7) page strip.  This one introduces Animan and it is written and drawn by Wally Wood.  It’s the first part of a planned continuing adventure.  Next up is “Absurd Science Fiction Stories, written and drawn by Jack Gaugham.  It’s the longest comic story/strip in the issue and the most crudely drawn, and it goes ten (10) pages, but it is also the funniest contribution, as well.

The last page explains why the magazine/fanzine is entitled Witzend, rather than the advertised title of Et Cetera.  The short answer, is that there already was a publication using the name Et Cetera!  And last, the back cover showcases a nice illustration of Buster Crabbe (I think), by Frank Frazetta.

A pretty nice package for a first issue, but it certainly left room for improvement!

The second issue leads off with a Wally Wood cover of some sort of goblin like creature!  Striking to say the least.  Here tis: 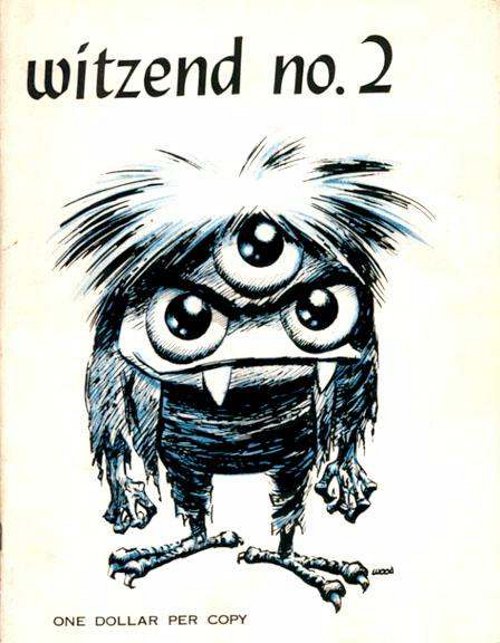 This issue is just dated 1967, but I would guess it was released early in the year, rather than later.  The first story in this issue is a six (6) page story done by Gray Morrow, which introduces the reader to his new character, Orion.  It’s a sword and sorcery tale and is very nicely drawn!  It appears that it is planned to have future stories following this hero.

Then a Will Elder funny monster one page joke, merging the Bride of Frankenstein and My Fair Lady, believe it or not!  Then a strange three (3) pager by Art Spiegelman.  Following that, Steve Ditko gives us a one (1) page story entitled; “Midnight Special” that has nothing to do with the famous song!  Then Mad Magazine alumnus, Don Martin,  provides a two (2) page “By the Fountain in the Park”.

The second issue also brings the reader another Wally Wood Animan story that runs nine (9) pages!  And finally things wrap up with a couple of pages of credits and a plea for subscribers.  There are spot illustrations by Al Williamson and Roy G. Krenkel on these pages, as well.  The back cover is done by Ralph Reese.

Is the second issue better than the first?  Maybe, but still has room for growth, at least in my opinion! 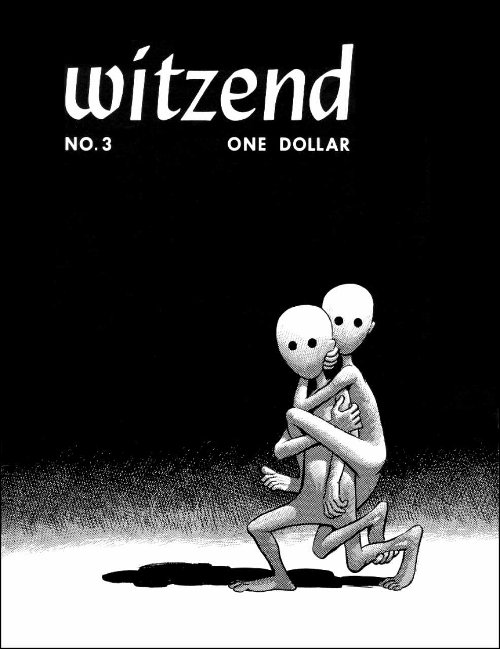 This issue is also dated 1967, and I would guess it appeared during the later half of that year.  Leading off this issue is Steve Ditko, who showcases another new character, making his very first appearance!  And who is that character?  Mr. A.  It’s an instant classic! And it’s told in just five (5) pages.  This character will appear again within the pages of Witzend, as well as, other fanzines.  Later, Ditko will also self-publish comics featuring Mr. A.!

More poetry follows Ditko’s Mr. A. story, this time all by Ralph Reese.  Next we have part two of the Reed Crandall Edgar Rice Burroughs portfolio (part one having run the previous issue).  Art Spiegelman returns for three pages of “a very strange comic strip”, yes, it’s entitled that!  Plus a one (1) page Harvey Kurtzman Hey Look, too.

Next up, is the first three pages of a new continued story, entitled; “The Invaders” by Richard Bassford.  Then Roger Brand presents “The Chase”, a complete five (5) page story!

Then Wally Wood returns with the first episode, three (3) pages, of ” The Pipsqueak Papers”, featuring Nudine and Pip.  This is followed by a one (1) page prose story entitled; “Vanessa” written by Sam Kobish.  The fanzine then gives the reader a nine (9) page story by Frank Frazetta, entilted; “Last Chance”!

Finally we get another one (1) page Hey Look by Kurtzman.  Plus a back cover by Al Williamson puts an end to this issue!

Issue four is dated 1968, so let’s call it a Spring release!  Hey why not!  It features yet another Wally Wood cover this time, of a knight riding a horse towards a castle, while carrying a broken lance.  Take a look: 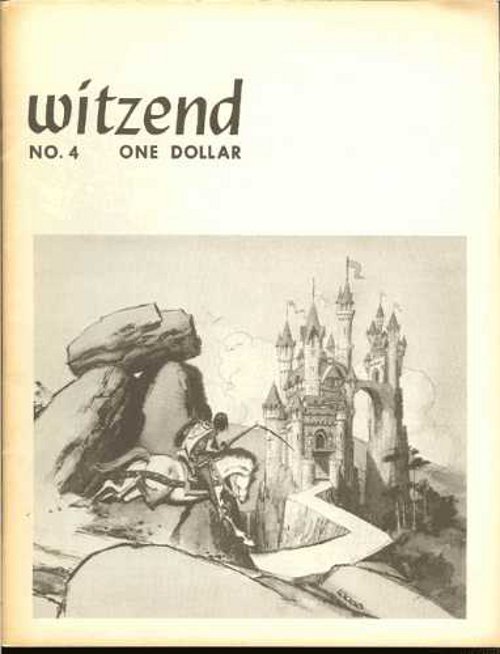 Leading off this issue is another Pipsqueak Papers adventure, by Wally Wood, this one runs four (4) pages in length.  That is quickly followed by a ten (10) page return of Mr. A. by Steve Ditko!  It’s beautifully drawn at a Ditko at the height of his comic book skills!

Next up is a three (3) page humorous story entitled; “The Sneeze” written by Bill Pearson and drawn by Grass Green.  Then a six (6) page sword & sorcery story by Roger Brand, entitled; “Virtue Ever Triumphant”.  It’s not the best drawn effort in the fanzine, but the story is excellent!  And finishing off this issue is a preview of Wally Wood’s “The World of the Wizard King”.  It’s a prose story, heavily illustrated by Wood!  This issue presents the prologue and the first chapter and introduces the hero, Odkin!

The back cover is simply beautiful as it features a Frank Frazetta battling a flying reptile!

Now with this issue, Witzend has really set the bar high for fanzines, though it could be argued that Witzend was really the very first prozine  published!  If you only wanted one issue of the run, this just might be the one for you!

Okay, what can I say about the cover to issue # 5?  Well, it does feature the back end of an elephant!  So what more can one say, so I’ll save the words and just show you the picture: 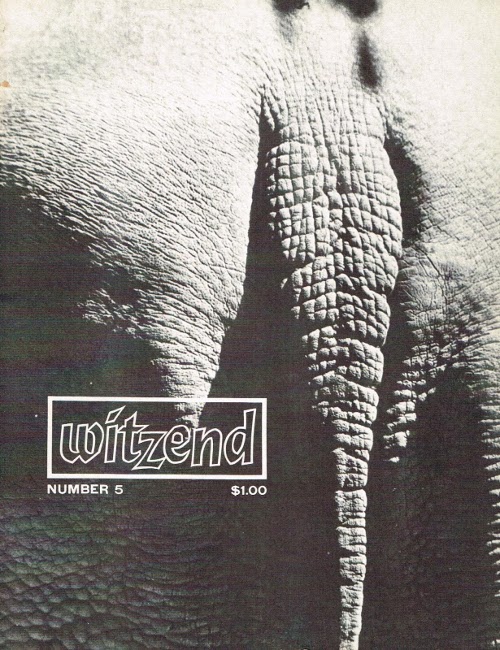 This issue is dated October 1968 and purports to be published quarterly, but has only managed to come out twice a year!  The interior leads off with chapter three of Wally Wood’s “The World of the Wizard King” and runs for five (5) pages.  Next artist, Vaughn Bode, makes his first appearance with a four (4) page Junkwaffel story!

This is followed by an eight (8) page story about a worm, or maybe a snake, a turtle and a dog by someone named Jaf, and it appears the title is also Jaf.  Strange and surreal!  Then the reader gets the fourth part of the Reed Crandall Edgar Rice Burroughs portfolio.

Wood is back with another five (5) page Pipsqueak Papers story, with Nudine and Pip!  Next up is a three page preview/portfolio from Jim Steranko, of his character Talon.  I remember seeing him sell posters of the drawings run herein, but as far as I know, Talon was never published in a comic book story.  But please correct me if I’m wrong.  I would love to see the character in something other than these three illustrations, though they are excellent illustrations, I just want more!

And filling out the rest of the book is an eight (8) page story by Roger Brand again, entitled; “Homesick”  Again I think this is the worst drawn story, but not necessarily the worst written story!  I just don’t think Brand’s art is a professional as the other artists featured in Witzend.

The back cover is also weak, in my opinion, and it features Warner Brother characters, Bugs Bunny, Porky and Petunia Pig.  It is drawn by Ed Paschke.

And that wraps up the first five issues of Witzend magazine.  I understand that you can purchase a new book/magazine of the best of Witzend, it was listed in last month’s Previews, so if you’d like to see what I’m talking about, without having to shell out a fortune, to buy these hard to find fanzines, you might give it a try.  But I recommend the originals, if you can track them down!

That’s all for this week!  Please come back next week for another RETRO REVIEW and let me know if you’d like me to cover the rest of the Witzend mags in a future column!  Be seeing you …