1 out of 5 – Would Recomend: Hercules In New York 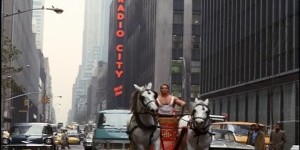 Welcome back to 1 out of 5 – Would Recommend, where all cinematic sins are remembered! In honor of Arnold Schwarzenegger’s newest flick, Terminator Genisys, we’re taking a look at his film debut – an obscure little trash heap from 1970 entitled Hercules in New York!

Hercules (Arnold “Strong”, according to the credits) displeases his father Zeus and is exiled to Earth, where he subsequently blunders his way to New York City. He sets up in the Big Apple and has a grand old time showing off his strength until the movie decides to have an actual plot near the end and he runs afoul of some gangsters.

Side Note: All of the gods & goddesses go by their Roman names, save for Zeus, but still refer to themselves as Greek and hail from Olympus (which didn’t have a Roman equivalent). Nothing any more egregious than what’s been done in comics for decades, but still somewhat lazy. 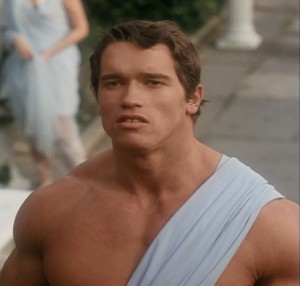 Uh, no one important, so far as research could tell. The movie was made at the height of Arnold Schwarzenegger’s body building career, right around the time he was becoming the youngest world champion in history. He wouldn’t really break in to film for another six years, so you have to assume the draw was “look how strong this dude is!” In the original cut, he was credited as Arnold Strong “Mr. Universe” and dubbed over, so you know neither his acting talents nor his name were the draw.

The downfall of this column is that many of these bad movies end up watched by an audience of one, when they are best enjoyed with like-minded folks tearing them a new cue mark. Watched alone, this flick ends up pretty boring as it has about an hour’s worth of plot heroically stretched to ninety minutes. The Gods repeat themselves, repeating the same points over and over, rendering the Greek Gods repetitive and they are joined by the movie’s jokes – Hercules is inhumanly strong, Hercules is unfamiliar with human customs, Pretzie is a nebbish, recombined ad infinitum. That having been said, the movie would probably tick over to “pretty funny” if it was watched with friends. 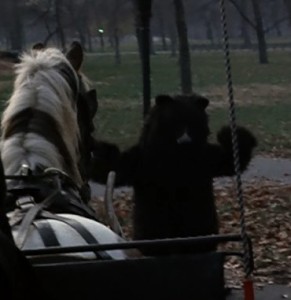 Not a *lot* more convincing, mind you.

NEXT WEEK: RiffTrax is heading back to theaters and so we’re giving you Five Reasons to Watch Mystery Science Theater 3000 – The Sci-Fi Channel Years!