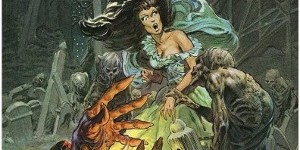 Welcome back for another Fabulous Find.  This week I’ve pulled from my collection two (2) paperback books that were published by Warner Paperback Library in conjunction with National Periodical Publications, i.e. DC Comics in 1973.  They are The House of Mystery # 1 and The House of Mystery # 2.  Both books contain short stories written by Jack Oleck and feature illustrations by Bernie Wrightson.

The first was published in April of 1973.  Here’s the cover of that beauty as done by Bernie Wrightson: 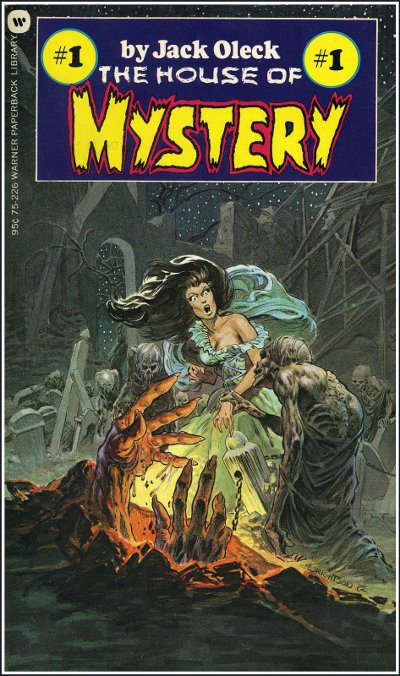 The book, like the similarly titled comic book, features short horror stories written by Oleck.  Each story also includes one Wrightson illustration based on the story.  This first book includes eight short stories.  The first; “Chamber of Horrors” is about three coffin like boxes of earth in the cellar of an old house.  Tale number two; “Nightmare” is about a stormy night at Stonehenge and a tourist who missed his bus.

Next up is; “Collector’s Item” and it features a cursed set of coins, 2000 years old.  Tale number four is entitled; “Born Loser” and is about an ineffectual bookkeeper who dreams of summoning demons.  The fifth story is; “Tomorrow, the World” and features a psychiatrist and a homicidal maniac, both who have an interest in witchcraft.  Tale number six is: “The Haunting” and it is about two young couples and one ghostridden house.

Tale number seven is entitled; “You Only Die Once” and is about a marriage filled with enough hatred that it survives the grave itself.  And finally the last story in this book is; “Act of Grace”, where a crippled child escapes from the grimness of an orphanage to find his ‘happy place’.

Here is the Wrightson frontispiece for your viewing pleasure: 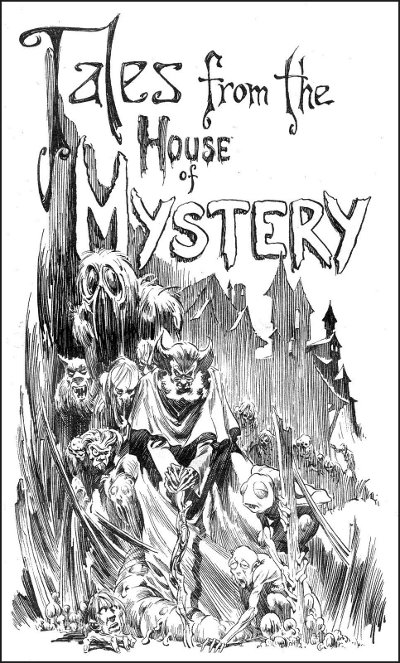 And here is the Wrightson illustration from the short story “Collector’s Item”: 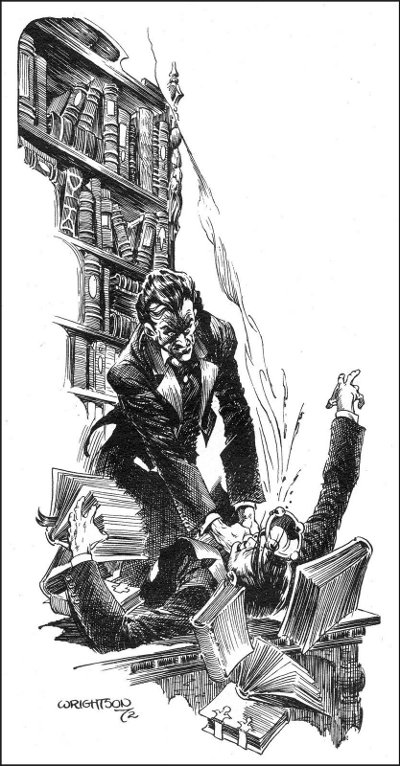 On the back cover of the book, in large letters is printed … “For the Connoisseur of Terror”.  If that doesn’t make you read the book, then I just don’t know what would.  This first book doesn’t go cheap on the secondary market.  The cheapest I’ve been able to find it recently was for about twenty-five dollars, though you can generally find it pretty easily.

The second book in the two book series was published in August of 1973 and looks like this:

It too, features eight short stories written by Jack Oleck, with illustrations within, done by artist Bernie Wrightson, as is the cover, as you can see above.  The quality of Wrightson’s art might be a little less than on the first book.  I think the art in the first book is slightly better than in this second book, but you’d have to judge that for yourself.  FOr the record, the second book generally sells for less than the first one.  I have found it for about fifteen dollars, rather than the twenty-five dollars that the first book seems to sell for.

The first story is entitled; “Wolf Spawn” and centers around Langley, who wonders if it’s possible that his sister is really a werewolf.  The second story; “Sweet Smell of Success” is about a man who’s wife is dead, but she continues to torment him.

The third tale is entitled; “Island of the Damned” and poses the question … why did others have to die,so that Tobin might live?  Next up is; “Where Dead Men Walk”.  In this tale Adkins must determine if a vampire actually exists, or was he right to scoff at the idea?

Tale number five is; “Message From Beyond”, where a dead man destroys the perfect swindle.  This brings us to the sixth story; “Sacrifice”.  This story features Irena who contemplates what price she is willing to pay for murder!

The next story is; “Never Say Die” and poses the question, what happens to a hoodlum who doesn’t deserve to live, but refuses to die?  And the eighth and final tale is entitled; “Donovan’s Demon” and is about a demon that Donovan has called up, but is he Donovan’s servant or his doom? 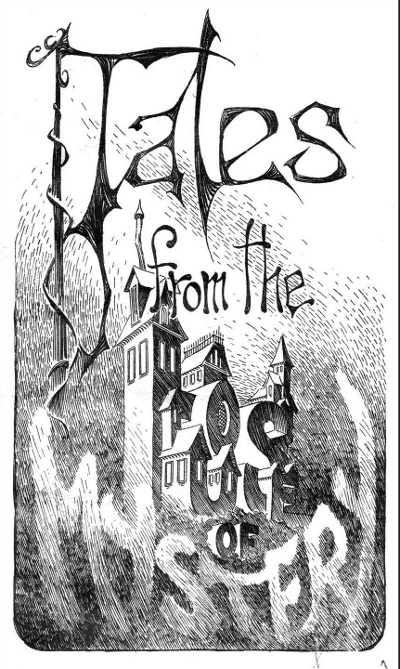 And from the tale; “Where Dead Men Walk”, Wrightson’s illustration: 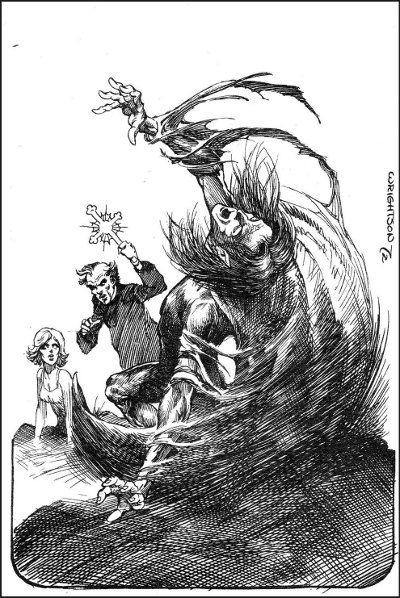 The back cover of this second collection of short stories asks …”Can you endure this Host of Horrors?”  Not quite the catch phrase of the first book.  Somehow this second book just doesn’t quite live up to the first book, again at least in my opinion.

Both books are worth collecting, but is you only want one, then I would recommend spending your money on the first and taking a pass on the second.  Otherwise, if you’re like me, you’ll need them both in your collection.,

That’s it for this Fabulous Find, but please return next week for a new RETRO REVIEW.  Same bat time, same bat channel.  This is Greg Turner signing off …