1 out of 5 – Would Recommend: Jingle All The Way 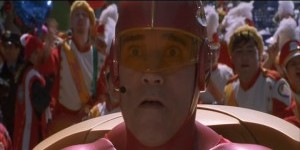 Welcome back to 1 out of 5 – Would Recommend, where no one’s childhood is spared – not even mine. As part of our month long Christmas celebration, we’re tackling the 1996 ode to crass commercialism known as Jingle All The Way.

Howard Langston (Arnold Schwarzenegger, who will just be called “Arnold” from here on in because he’s not exactly Daniel Day Lewis) is a neglectful workaholic dad who forgot to get his son the hot toy of the season. To avert ruining his marriage, the kid’s life, and Christmas in general, he…once again neglects his family to hunt down the toy on Christmas Eve. But it’s all OK at the end, because he gained super powers and beat up Sinbad to prove that he loved his wife and son.

20th Century Fox. Other than the Governator, the movie’s cast includes the aforementioned Sinbad, the late and lamented Phil Hartman, Jim Belushi (who fails to live up to the comedy legacies of TWO dead guys in this movie), and Jake Lloyd, prior to The Phantom Menace ruining his life. It’s an all-star cast, using the standards of Dancing With The Stars.

Look, Jingle All The Way is really just an average not-very-good family movie. The plot’s an excuse for slapstick, it’s an ode to the crass commercialism that better movies (Miracle on 34th Street comes to mind) decries, and the real life Turbo Man dolls…actually go for quite a bit on eBay, unlike most real “hot Christmas toys”. But I saw in theaters when I was six and therefore it holds a special place in my heart. Just avoid last year’s “sequel”, starring Larry The Cable Guy.

Also, I’m so jealous of that kid’s bedroom wall and I bet you are too.

Category: TV & MoviesBy Chris WalkerDecember 8, 2015Leave a comment
Tags: 1 Out of 5 Would RecommendArnold SchwarzeneggerChristmasJingle All The Way