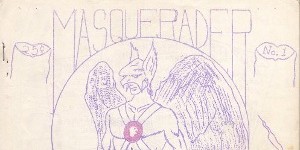 Time again for a new, or is that old, Fabulous Find?  This week I’ve excavated another old fanzine from my collection.  This one is an early one, maybe the oldest in my collection. And what is that fanzine?  An excellent question, and the answer is that the fanzine is; Masquerader # 1, dating back to 1962.  It was published by a young fan, who went on to become a professional comic book artist, Mike Vosburg.  Mike published this beauty while living in Pontiac, Michigan.

This fanzine was the first one published by Mike.  Though I do understand that he prepared a “test” issue 0f issue # 1, which was only about eighteen (18) pages, that he sent to other publishing fans for their input.  The result then was the full length issue # 1, which ran fifty-two (52) pages, which came out in 1962.  I’m not sure exactly when the test issue was sent, but my guess would have been late 1961.

The cover to this first issue is a drawing of DC Comics‘ Hawkman which was drawn by Paul Seydor.  I suspect that Hawkman was Vosburg’s  favorite character, as he appeared on the cover of each of the six issues of Masquerader that Vosburg published.  Here’s Seydor’s cover for that first issue: 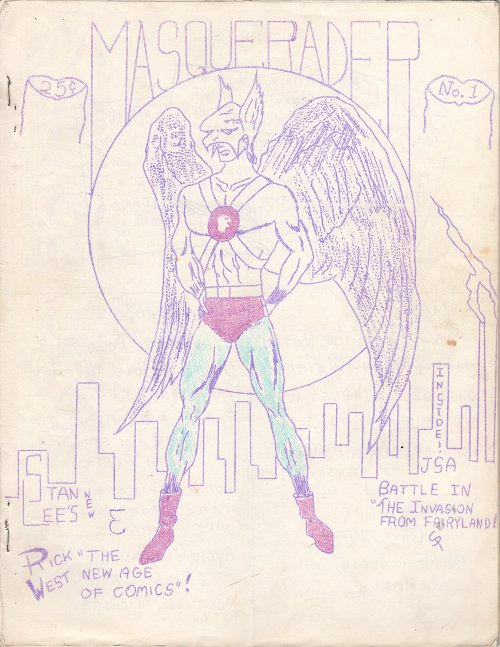 Sorry about the light reproduction this time out, but it is tough to scan better images of these old spirit duplicator fanzines.  Actually, the fact that this is an almost fifty-four year old “mimeo” style fanzine, it’s amazing that it is even readable, let alone reproduce so well.  Today many of you might not even know what putting together a fanzine using a spirit duplicator entails.  So let me give you a quick lesson.  First all of the typing and artwork had to be done on stencils, then each individual page was hand cranked through the ink and chemicals of the spirit duplicator.  Then they were set aside to dry, before running them back through if the printing was done on both sides of the page.  Masquerader was printed on both sides by the way.

Each page got about a maximum of two hundred copies before the inks gave out and the page faded into unreadability.  And of course, the original page was subject to tears and wrinkling, so that they were no longer usable, before the ink ran out.  These types of fanzines are the rarest ones around, due to the small print runs!

But back to Masquerader # 1, behind the cover on the inside front cover was a couple of ads, recommending other fanzines or posting want lists from two collectors.  Page three contained the indicia and table of contents.  Next was a five page article/review by Vosburg on the 1948 Justice Society of America story entitled; “Invasion From Fairyland”.  Vosburg also provided the illustrations that accompanied the article.

Next up was a two page look at three new heroes from Marvel Comics; Spider-Man, Thor and Ant-Man, again with art by Vosburg.  Here’s is Vosburg’s artwork featuring Spidey and Thor.  Sorry Ant-Man was drawn on another page, with the article, so I didn’t scan that page, so you’ll have to make due was just this one: 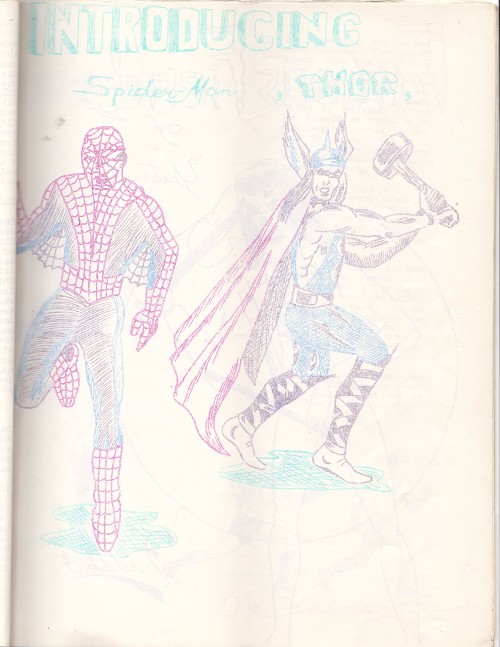 Following this short introduction of the three new Marvel heroes was a one page “Famous Fiends of Yesteryear” featuring the Fiddler as drawn by Fred Jackson.  Following this was another page drawn by Vosburg featuring various heroes form various comic book companies.  My copy has this page that is very light, so I didn’t even try to get a good scan.  Next up was/is a long article (6 pages) entitled; “The New Age of Comics”.  It was written by Rick West.

Following this article was one entitled; “The Shadow Gains An Assistant”, written by Fred Jackson and I suspect illustrated by him, as well.  After this article, was another, this one written by fan, Mike Tuohey, and focusing on the golden-age character, The Hangman.  Next up are a couple more full page drawing by editor/publisher Mike Vosburg.  Here’s the one featuring golden-age DC characters; Sandman, Hourman and Starman. 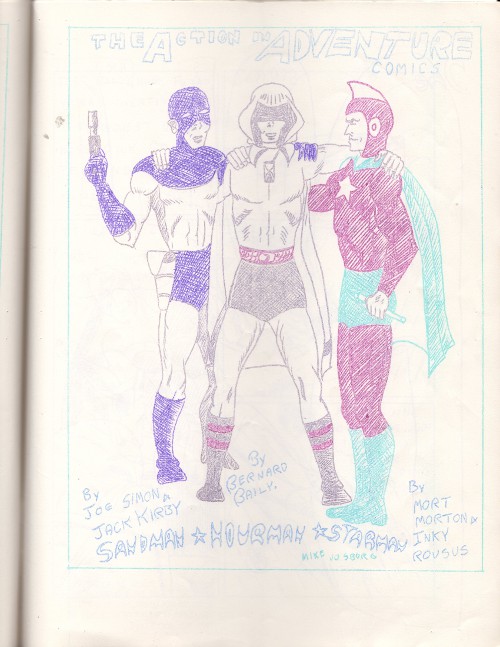 Then the reader gets a six (6) page original comic strip featuring the Bolt.  The story was by Larry Charet, scripted by Fred Jackson and drawn by Mike Vosburg.  It’s definitely an amateur effort, but we must remember that Vosburg was only a freshman in High School when he published this fanzine.  Next up is an editorial by Vosburg, entitled; “The Masquerader Speaks”.  Following this, is another comic strip featuring a new Character, called; The Cowl.  This one is written by Vosburg and drawn by Ronn Foss.  The strip runs seven (7) pages..  The last ten pages, or so are ads for other fanzines and more want lists from fans of the day, including Vosburg, himself.  Within these pages is a cute three (3) panel comic strip by Fred Jackson and a nice one (1) page illustration by Biljo White.

The fanzine sold for only twenty-five (25) cents and my copy has the 8 cent stamp still attached that was used to mail it to it’s original purchaser.  So needless to say, young Mister Vosburg didn’t become rich as a fanzine publisher.  But truthfully, back then in the earlier sixties, the publishers of these fanzines were definitely not in it for the money, but just for the sheer love of comic books and being able to reach other fans who loved the same thing.

I’m lucky enough to have put together a complete set of Masquerader (all six issues published), so if you’d like to see and hear more about this particular fanzine, please leave me a comment here or a shout back on Twitter or Facebook, if that’s where you’re reading this.

Thanks for stopping by  for this week’s Fabulous Find and be sure to return next week for a new RETRO REVIEW.  til then, be seeing you …