1 out of 5 – Would Recommend: Santa & The Ice Cream Bunny 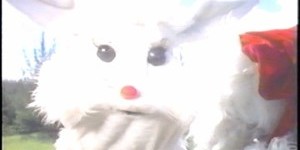 Welcome back to 1 out of 5 – Would Recommend, where what you flush, I flaunt. Our month long celebration of Christmas continues this week with the 1972 cinematic lump of coal, Santa and the Ice Cream Bunny.

Santa Claus’ sleigh becomes stuck on a Florida beach somehow and enlists a diverse group of local children with no real personalities to try and help him. They try and fail to force a variety of barnyard animals to pull the sleigh, Santa tells a longwinded story about Thumbelina (or Jack & The Beanstalk, depending on the print) , and then the Ice Cream Bunny (who?) cranks up in his vintage firetruck (what?) to give Santa a lift to the North Pole (WHAT?!).

Santa and his old friend, who the movie expects you recognize.

Pirates World, a regional amusement park utterly crushed by Disney opening their Florida park nearby in 1971. The film seems to be an extended ad for the place, filmed in and around the park presumably using costumes and props they had on hand.

The park closed forever in 1975 and is now a condo complex.

This movie is awful, and inexplicable, and awful, and cheap, and awful. It was obviously made by desperate amusement park employees with what they had on hand and a budget of five bucks. In short – amusing as hell. It’s also available in full on YouTube, so give it a look. There’s also a RiffTrax version available, if you’d prefer some intentional comedy to get you through the dull bits. 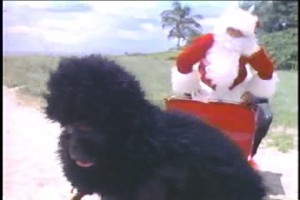 Five bucks says that’s Florida Man high out of his mind in there. Either one of them, really.

NEXT WEEK: We travel south of the border for 1959’s Santa Claus.

Category: TV & MoviesBy Chris WalkerDecember 15, 2015Leave a comment
Tags: 1 Out of 5 Would RecommendChristmasRiffTraxSanta and the Ice Cream BunnySanta Claus