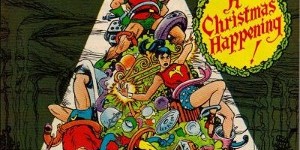 Merry Christmas and Happy Holidays, to all my family, friends and fans!  Yes I know it’s still a week till Christmas, but so what, it’s time for another RETRO REVIEW and this week it is time for a DC Comics review.  Therefore, I’ve entered the DC section of my comic vault and brought to light Teen Titan # 13, cover dated February 1968.  And as you can see by the fine cover, drawn by artist Nick Cardy, this comic is Christmas themed.  Take a look at the cover that was both pencilled and inked by Mr. Cardy: 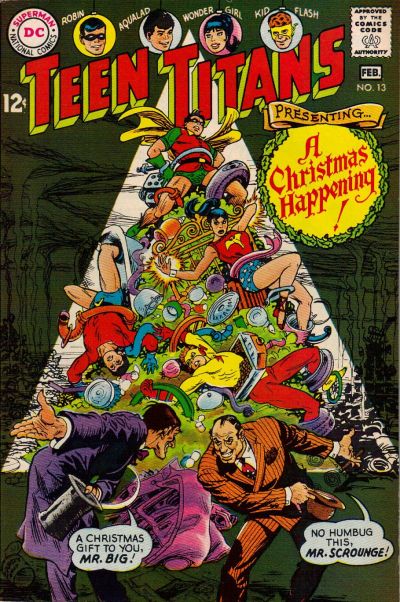 The story opens with the Teen Titans relaxing two days before Christmas and the snow gently falls outside.  Three of the Titans are reading comics, Kid Flash is reading a copy of Superman, Aqua Lad is reading Aquaman, natch, and Wonder Girl is reading a copy of Wonder Woman, no beg surprise there, eh?   I wonder why Kid Flash wasn’t reading a copy of The Flash?  Anyway, Robin is curled up with a book, Charles Dickens’ classic; A Christmas Story.  The other three jump on him for reading such a “square” story when he could be reading a Batman comic book!

Wonder Chick even goes so far as telling Robin that Dickens’ story is “definitely ungroovy”.  Robin gives in and picks up the copy of Batman, but then in a panel focusing close up on Dickens’ book, the caption reads; “yes, Dickens’ story is a dusty, corny old classic – and like it couldn’t happen today … or could it?”

The scene quickly shifts to a junkyard, where Bob Ratchet works for the owner of the Junkorama, Mr. Scrounge.  Yes, indeed, Scrounge is an old miser, just like Dickens’ Scrooge.  He refuses to heat his establishment and barely pays Ratchet enough to care for his crippled son, Tiny Tom.  Are you starting to get the picture, readers?  Ratchet wants Christmas day off and Scrounge reluctantly agrees and he even sends Ratchet home early, so that he can meet a truck of junk being delivered by a couple of hoods.

But instead of paying the hoods for the junk, they pay him!  By this time Tiny Tom in his wheelchair arrives to see his dad, but as he’s already left, Tiny Tom decides to look for him in the junkyard.  Of course, he sees the two hoods paying Mr. Scrounge and thinks something must be going on,  Scrounge leaves but Tiny Tom sticks around long enough to witness the hoods using some sort of ray to turn the junk from overseas into brand new items, like cars and motorcycles, which their boss, Mr. Big, will turn large profits, while avoiding import taxes.  Maybe a silly premise, but a logical scheme, never the less.

Tiny Tom tells his dad about what he has seen when he returns home and implores his dad to call the police.  Mr. Ratchet wants to talk to Mr Scrounge first.  When he does, Scrounge tells him to mind is own business and orders him to work Christmas day, as well, so that he can keep an eye on him.  Bob Ratchet tells his son and when he leaves for work the next morning, Tiny Tom calls the Teen Titans.

Remember them?  It’s their comic book.  The Titans come and investigate the junkyard and just before witnessing the conversion of old junk to new vehicles, a shadowing figure appears and prevents the hoods from accomplishing their mission.  The hoods leave to get Mr. Big and and the shadowing figure next appears on Mr Scrounge’s doorstep.  Pounding on his door, he announces that he is Scrounge’s old partner, Jacob Farley, who had been sent to prison for a job that he and Scrounge completed using faulty materials.  Scrounge saved himself but allowed Farley to take the full blame and get sent to prison.

The Titans arrive and save Scrounge and Farley makes his escape.  But Robin points out that all the involved people have names similar to A Christmas Carol and that a similar story is taking place in 1967.  Which gives them the idea to stage the three ghosts of Christmas, past, current and future, in an attempt to get Scrounge to change his evil ways.  Scrounge flees to his junkyard and Wonder Girl who is playing the part of the Ghost of Christmas future follows, but she is trapped by Mr. Big and his hoods and almost crushed in the car crusher, in a nice sequence drawn by Cardy.

Using some sort of defense mechanism, the four Titans are drawn into a trash heap that resembles the Christmas tree cover somewhat.  Tiny Tom tries to help but his wheelchair is destroyed and it is at this point that Mr. Scrounge finally sees the errors of his ways, as earlier he and heard Tiny Tom stand up for him, when everyone else said was just a miserly hateful old man.  Scrounge turns off the machine and the Titans quickly defeat Mr. Big and his hoods.

Scrounge then uses the crooks ray to create a new motorized wheelchair for Tiny Tom, from the junk in the junkyard and Tiny Tom ends the story by saying; “Best wishes to all – for a swinging and groovy new year … and bless us everyone!”

Yep, pretty cheesy, but some how, also pretty neat.  Say what you want about Bob Haney “borrowing” Dickens’ story, but he adapted it to fit into the Teen Titans milieu nicely and it made a pretty nice read at Christmas time back in 1967.

So from me to all you … Best wishes for a swinging and groovy New Year … And bless us, everyone!