1 out of 5 – Would Recommend: Puppet Master: The Littlest Reich 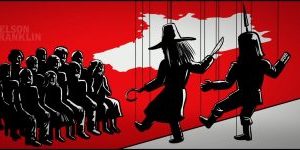 Welcome back to 1 out of 5 – Would Recommend, where we’re looking at a reboot of a long running horror movie franchise that is, in fact, still producing new entries – no, not 2019’s Child’s Play, 2018’s Puppet Master: The Littlest Reich!

A convention/memorabilia auction is being thrown on the 30th anniversary of the death of serial killer, Nazi, and puppet maker Andre Toulon. Collectors of Toulon’s puppets gather at a hotel in the town in which he made his final stand the night before the auction. And then people start turning up dead, leaving indie comics creator Edgar (Thomas Lennon) stuck in the middle trying to stay alive…

Surprisingly, not series creator Charles Band (though he’s involved). This one’s written by S. Craig Zahler (the auteur behind 2015’s indie horror western Bone Tomahawk) and co-produced by Lorenzo DiBonaventura, who also produced Bumblebee & The Meg (among other flicks) that year. It reboots the franchise and ascribes a much more sinister, Nazi origin to both Andre Toulon and his puppets…which is ironic, since the last three of the total twelve flicks in the “original” series featured the puppets battling the Nazis.

This movie is, actually, shockingly good. Considering that it’s a reboot of a franchise that previously counted a pre-The Room Greg Sestero as one of it’s bigger names from a better emtry, the bar is set fairly low to start but it manages to be a genuinely creepy (if firmly B-grade) slasher flick.  Some of the kills go out of their way to be over-the-top and are somewhat uncomfortable to watch…but whether or not that’s a bad thing is a philosophical argument for another day.

Come Back Next Week for the Final Entry in this Year’s Spooky Season Series!